A few years back, finding myself stranded on the side of the road with a broken down pickup truck and being over an hour’s drive from home, I convinced myself to finally get a mobile phone. 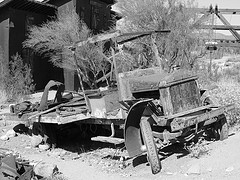 I didn’t necessarily want to have a phone hanging at my side all of the time, and I didn’t need it for work at that time. But it would have been useful in that emergency, and I wanted to start seeing what web sites looked like on a phone.

Search engines are also paying more attention to the smaller screens, and the more limited keyboards available to people who access the Web by phone. What influence do these constraints have upon the future of mobile search?

In many cases, the future of the Web is on smaller screens, which presents challenges not only from a design stance, but also from how search engines may suggest queries and present results to searchers.

Internet access by phone is growing at a very quick clip, and will likely continue to do so. That’s why it isn’t surprising to see papers published from researchers at the major commercial search engines like one from Google titled Query Suggestions for Mobile Search: Understanding Usage Patterns

If you own a web site, or work on one, it might be time to start thinking about how your site looks on a phone, how people use your site, and how mobile search might influence whether your site will be found in searches made by people using phones.

While people do perform searches on mobile phones, using a standard nine number keyboard can be challenging. We are told that:

The average query on Googleâ€™s mobile search page is 15 letters long, but takes 30 key presses and approximately 40 seconds to enter

The paper describes a study which explores how people search on a mobile phone with nine number keyboards (a future study might look at users of phones with qwerty keyboards), and how they interact with query predictions and suggestions that appear as a searcher is typing a query into a search box.

Some interesting observations came from the study:

It’s interesting that people will so readily choose query suggestions offered to them in a dropdown as they are typing in a query. What impact will that have on the words that people choose to use when they search?

Implications of Query Suggestions on Phones

We are told that the primary purpose behind the study was to:

What isn’t discussed in the paper are the possibility implications behind offering query suggestions to begin with.

Many of those posts go into some detail on how a search engine will determine which query suggestions to present when someone is typing a query into a search box, and my post on Yahoo’s Alternative Search Query Predictions provides a list on the types of suggestions that could be shown in predictive queries as well as the kinds of factors that might bias which results appear within a drop down.

Google has also provided a look at local search and maps, and how it could change distances as a searcher tries to find destinations while moving around and searching through their mobile phones, which I wrote about in Smarter Google Maps Would Add Movement and Templates for Tasks

A couple of years from now, people searching on newer generation iPhones and other more capable smart phones and PDAs may be trying to find your site on their phones. Will they find you?