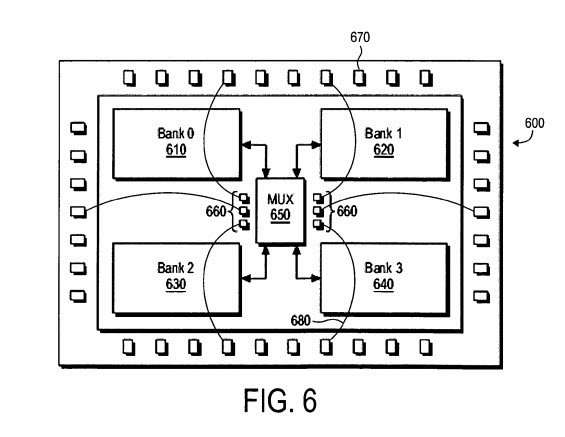 In August, the Official Google Blog announced an upgrade to Google’s infrastructure code-named Caffeine, aimed at making the search engine faster, and Google opened the system up for testing to people who might want to provide feedback. An interview with one of the developers behind the upgrade described it as an upgrade to the Google File System.

While looking around the US Patent Office assignment database this morning, I noticed a number of new patents and patent applications assigned to Google on November 18, 2009, originally granted to startup MetaRAM.

If a search engine wanted to seriously upgrade its capabilities, it might do more than upgrade its software. It might also upgrade the hardware that it uses. The technology detailed in the MetaRAM patents could potentially transform Google’s computing capacity dramatically.

I have no idea if Google’s Caffeine upgrade also includes a memory upgrade from MetaRAM at this point, but I suspect that the MetaRAM patent assignments could be related.

A post at the Wall Street Journal’s blog from July told us about the demise of MetaRAM, a startup with some very high profile founders, board members, and executives, including a CEO who was chief technology officer of Advanced Micro Devices Inc for ten years, and a Board of Directors’ member who was a former chief scientist of Sun Microsystems Inc. – Turning Out The Lights: Semiconductor Company MetaRAM

An interview with original and former CEO of MetaRAM from May of 2008, provides a lot of insight into the direction that the company was taking – Pioneering Change in the Memory Market: MetaRam Visionary Fred Weber.

Did Google acquire MetaRAM or just the patent filings from the company? I’m not sure at this point. The WSJ blog post tells us that the company was shutting down without providing a date for its closing, but the LinkedIn profiles that I could find for people from MetaRAM still list their positions with the company as their present place of employment.

I haven’t been able to locate much in the way of recent news about MetaRam, nor much that associates them with Google.

Will Google keep this new technology from MetaRAM in-house, and use it to reduce the costs of servers and workstations by a significant amount while increasing the amount of memory available to those systems, or will they license or sell the technology directly, or both? So little is known at this point, and there hasn’t been an announcement from Google or anyone from MetaRAM yet that I could find. I haven’t seen any rumors of the transaction behind the assignment of the patent filings anywhere on the Web either.

I’ve listed the granted patents and the patent applications from MetaRAM separately below. There are 49 of them in total, though a number of them have been filed more than once for one reason or another.

Interface circuit system and method for autonomously performing power management operations in conjunction with a plurality of memory circuits (7,392,338)

Interface circuit system and method for performing power management operations in conjunction with only a portion of a memory circuit (7,386,656)

Power saving system and method for use with a plurality of memory circuits (7,580,312)

System and method for simulating an aspect of a memory circuit (7,609,567)

System and method for power management in memory systems (7,590,796)

A system and method are provided. In use, at least one of a plurality of memory circuits is identified. In association with the at least one memory circuit, a power saving operation is performed and the communication of a signal thereto is delayed

One embodiment of the present invention sets forth an abstracted memory subsystem comprising abstracted memories, which each may be configured to present memory-related characteristics onto a memory system interface.

One advantage of the disclosed subsystem is that memory performance may be optimized regardless of the specific protocols used by the underlying memory hardware devices.

In still other embodiments, the buffer circuit interfaces the memory stack to the host system for configuring one or more of the DRAM integrated circuits in the memory stack. Neither the patentee nor the USPTO intends for details set forth in the abstract to constitute limitations to claims not explicitly reciting those details.

A system and method are provided, wherein a first component and a second component are operable to interface a plurality of memory circuits and a system.

System and Method for Increasing Capacity, Performance, and Flexibility of Flash Storage (20080086588)