The patent filing is fairly long and detailed, but many of the ideas it presents can be gleaned from the images accompanying the patent itself, like this overview flowchart: 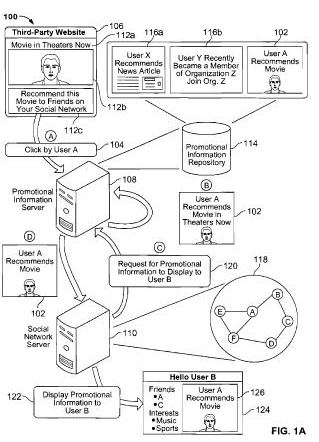 The method can additionally include receiving at the server system a request for promotional information to display to a second user of the social network, the second user having an acquaintance relationship with the first user.

A website, such as a shoe store, would be able to include “share” buttons on their site with pages or products that they would like to share, and set up a template as to how the information might be shown on the social network that it is shared with. The person who decides to share the information would be able to log into a social network from that third party site, and get a preview of what would be posted on their network, as seen in the following image: 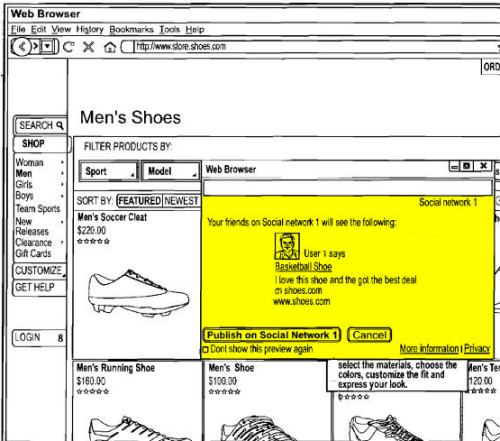 Once they hit publish, their addition would be seen on the social network that they selected: 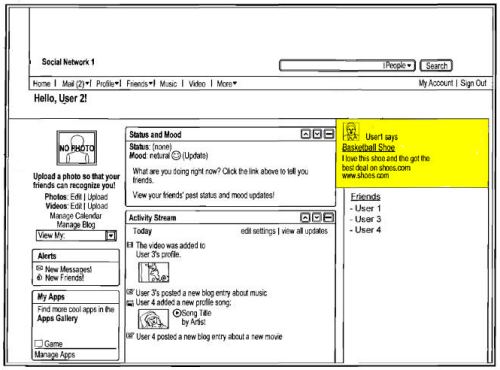 The patent filing allows for a range of content types that could be shared, including:

While the patent application’s description focuses primarily upon these shared items as if they were advertisements, there is also a range of materials that could be shared, including:

One of the areas where Google’s implementation of this feature may differ from what Facebook appears to be doing at this point, is an advertising aspect. Google points to the “word of mouth” benefit of this type of sharing, to potential users of the system:

We’re also told that there may be an incentive offered to people who might share in their social networks, with a sharing of a portion of revenue generated by their shares to the people sharing, and possibly to the social networks where the information is shared:

Users of a social network may be provided with incentives to share their activities on third-party websites for the purpose of creating promotional information. For instance, a user may receive a portion of the revenue generated by the display of promotional information associated with the user (e.g., an advertisement regarding a recent purchase made by the user) on a social network.

Additionally, a social network can receive revenue for displaying promotional information to its users.

Is this a step that Google might take in the future?

Should a shared link that was paid for by an advertiser, with the revenue split with someone who shared it on a social network be considered a paid link and/or an endorsement, with a requirement that it be labeled an ad – something I don’t see in the example screenshot above, showing a recommendation for shoes on a social network.

74 thoughts on “A Google Like Button: Adsense for Social Network Sharers?”