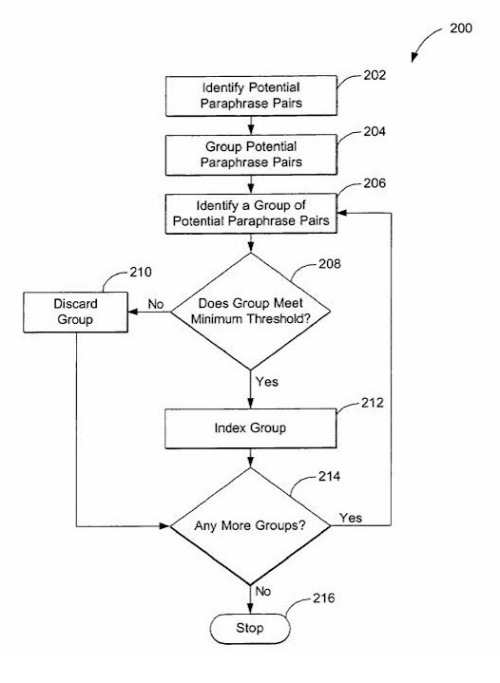 Imagine if Google could identify similar snippets of text when it comes across them in its index and recognize that they might be related in a meaningful way. For example, the search engine might see a headline on a news article that says, “Soviet troops pulled out of Afghanistan,” and another one noting that, “Soviet troops withdrew from Afghanistan.” Is Google capable of understanding paraphrases like that?

Is paraphrase-based indexing influencing the search results below?

I’ve written about Phrase-Based Indexing in the past, with my latest post on the subject being Phrasification and Revisiting Google’s Phrase Based Indexing. While phrase-based indexing involves a search engine going through web pages, and associating “good phrases” with specific pages, and finding out how frequently those phrases tend to co-occur in a certain top number of search results for a specific query, the impetus behind finding paraphrases is somewhat different.

A couple of patents originally filed in 2005, and granted to Google this week provide some details on how it might recognize paraphrases, index them, and use them. There are also some white papers from Google that explore the topic in more detail. I’m going to write about the first of the patents and one of the papers in this first post on paraphrase identification to introduce the topic.

In a search for the two headlines, I listed above, ideally Google would return the same or a very similar set of search results in response to both. Instead of just matching keywords to return documents, the search engine would have to be able to recognize that “Soviet troops pulled out of Afghanistan,” an “Soviet troops withdrew from Afghanistan” are somewhat equivalent to each other. While a search engine could rely upon people compiling potential paraphrases and mining text from documents to identify when those are actual paraphrases, that would be very time consuming and require a lot of effort by a lot of people to work well.

A better approach would be an automated one that does a reasonable job of identifying paraphrases. A Google Whitepaper, written by the inventors listed on the two granted patents that I referred to above describes how this might work, and a number of reasons why identifying paraphrases may be helpful. The paper is Aligning Needles in a Haystack: Paraphrase Acquisition Across the Web (pdf).

In the paper, by Marius Pasca and Peter Dienes, we are told that the method they have come up with for using an automated approach to identifying paraphrases is unique because it can use just about any document that it finds on the web regardless of the quality of that document, and it doesn’t need some kind of preprocessing that identified which documents are likely to contain paraphrases:

The method differs from previous approaches to paraphrase acquisition in that

Large sets of paraphrases are collected through exhaustive pairwise alignment of small needles, i.e., sentence fragments, across a haystack of Web document sentences.

While researching the process involved, Pasca and Dienes conducted an experiment in which they extracted paraphrases from roughly 972 million web pages.

Some reasons why Google might want to learn about paraphrases in the documents they index can include:

The first patent goes into a description of how some paraphrases might be identified on the Web.

Methods and systems for identifying paraphrases from an index of information items and associated sentence fragments
Invented by Alexandru Marius Pasca and Peter Szabolcs Dienes
Assigned to Google
US Patent 7,937,396
Granted May 3, 2011
Filed: March 23, 2005

One method involves looking for specific information while analyzing the content of a web page to see if there are dates, entity names, or concepts on that page, and sentence fragments that are associated with those.

Once the paraphrases have been identified, they may then be associated with one another (along with their sources) in a paraphrase index.

When looking for paraphrases like this, there may be some rules that would be followed. For example, the search engine might require some kind of similar alignment between the paraphrases. In this case, “soviet troops” appears in both fragments at the start, and “Afghanistan” appears in both at the end. There may also be a certain required threshold of types of words required to align like that. For instance, the aligning words may be required to be non stop words.

In deciding whether a paraphrase is valid, the search engine might look to see how frequently each of the sentence fragments appears in other documents on the Web, and if they don’t appear very frequently, it might not include them in its index of paraphrases.

This frequency value of paraphrases may be used to rank paraphrases to indicate how useful they may be in things like question answering results from the search engine, or in expanding a query to use paraphrase results.

As the patent tells us:

The search engine can use this information to search for documents that match both “withdrew from” and “pulled out of” and the rest of the search terms. In question answering, a question may be a natural language search query. It is helpful to identify any paraphrases of words or phrases in the question to more fully identify the answer.

The paraphrasing process may also potentially be used to filter some pages out of search results when it sees paraphrases in the snippets intended to provide a description of documents within those search results:

In summarization of a document or text, key sentences can be identified as being useful in summarizing the content of the document or text. By being able to identify paraphrases, duplicative sentences that say the same thing but in a different way can be eliminated.

I’ll dig more into paraphrase-based indexing in my next post. For now, it’s a good start to recognize that Google may be identifying paraphrases to use to expand queries, and possibly avoid presenting somewhat duplicate content.