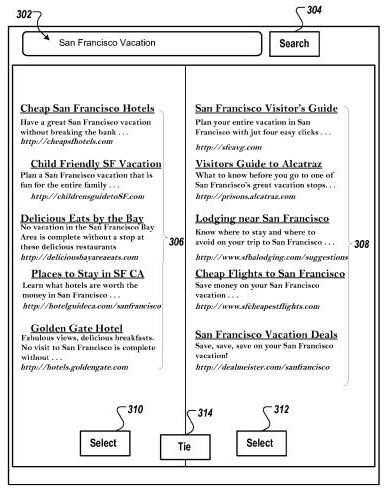 In the Youmoz blog post Introducing SERP Turkey: A Free Tool to Split-Test and Gather CTR Analytics of SERP Entries, Tom Anthony describes a process someone can use to measure changes to click through rates when taking a set of search results from Google and making changes to it. It’s an interesting idea and may be worth experimenting with.

We are told about the advantages of this framework, which includes:

Would Google open up evaluation of search results to the public at large, with the possibility of incentives as a draw?

The human evaluators patent does tell us about a number of different signals that might be considered and compared in a side-by-side comparison of search results for specific queries.

Those might include doing things like giving different weights to words found within a page title, or within anchor text pointing to a page, or whether terms from queries are found in the title, or in a URL of a page in the search result, or in the body of a result, or even how many times a term can appear within the body of a page before subsequent appearances of that term are discounted.

An API, or application programming interface, might be set up to easily allow different weights to be applied to different signals in a system like this. It’s possible that this system might be set up to be used by Google employees who are tweaking different ranking signals to be compared by evaluators that Google has hired.

If you’re interested in how human evaluators might been involved in helping to improve the quality of search results at Google, this patent appears to contain some hints at how that may be done.