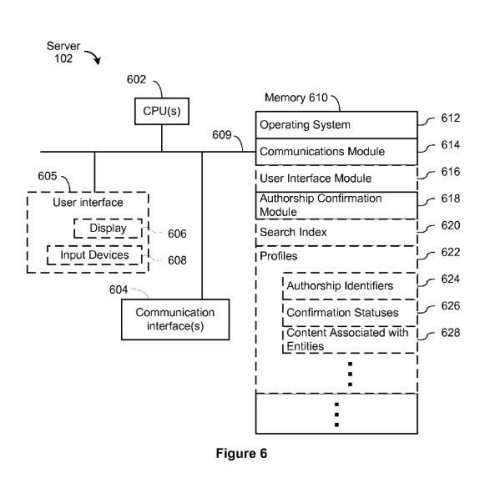 On September 8, 2011, Google filed a patent named “System and Method for Confirming Authorship of Documents,” (U.S. Provisional Application Ser. No. 61/532,511). This provisional patent expired on September 9, 2012, without being prosecuted. A day later, on September 10th, Google filed two new versions of the patent, using the same name for both of them. Google’s Othar Hansson’s name appears on both as the lead inventor, and the description sections are substantially similar, with a couple of very small changes.

There seems to be at least one difference that I uncovered in skimming through the documents, which involves the link based approach, and is described in this snippet from the patent applications descriptions sections:

Google seems to have decided not to use a rel=”contributor-to” link attribute value when only some content on a site was from a specific author, and a rel=”me” when all of the content on a site was from the same author. That would probably be painful (or confusing) to change (from rel=”me” to rel=”contributor-to”) if someone who had been the only author of a site decided to accept a guest post or page from another author, and to use authorship markup to provide proper attribution.

If you see other things within the authorship markup patent filings that appear to be different than how authorship was implemented, please let us know. 🙂

(In this one, the claims describe a link based approach to verification of authorship.)

(In this version, the claims describe an email based approach to verification of authorship.)

Abstract (Same for Both)