One of the more interesting discussions about Google Glass I’ve seen recently was in a forum where one of the participants was describing his own homemade version of Google Glass, which he named “Flass” (if someone at Google happens to be reading this, you should send him a pair of Google Glass, just because.) What was really interesting was that he was using a MyVu display in his clone.

I call it interesting because Google seems to have acquired a number of the patents from The MicroOptical Corporation, which was the predecessor to MyVu. MyVu no longer appears to be in business, and according to LinkedIn, the Founder and CEO and CTO of MyVue is now the Director of Operations at Google X. Here’s a view of one of the pairs of glasses created by MyVue (MicroOptical): 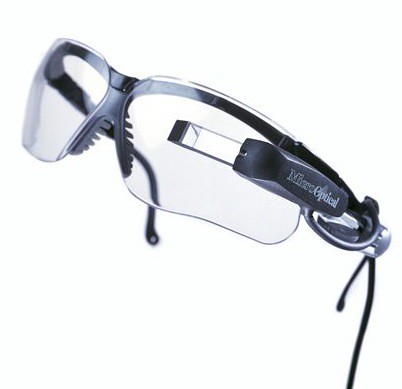 In his LinkedIn profile, Mark Spitzer is the Director of Operations at Google X. Before that, he was the Founder, CEO and CTO at MyVu Corporation. The Boston Globe article Former MIT â€˜borgsâ€™ still back wearable technology includes some quotes from him on some of the reasons why MyVu didn’t succeed. And then there’s this quote from the article:

The company later shifted to a thin pair of RoboCop-style glasses that could plug into an iPod, so users could watch videos privately on a larger screen. But the company didnâ€™t survive the last recession and its assets were sold off.

It looks like patent filings from MyVu/MicroOptical Corporation followed Mark Spitzer to Google, though it appears that they didn’t make the trip directly. The US Patent and Trademark Office assignment database added an assignment from Hon Hai Precision Industry Co., LTD. and Gold Charm Limited (a subsidiary of Hon Hai) to Google this past week, with an execution date of April 19th, 2013 and a recording date of April 20th, 2013. According to an article at TechCrunch, the management of manufacturing of Google Glass may be done in a plant in Santa Clara by Hon Hai Precision, also known as Foxconn.

This review from 2006 shows what one version of wearable glasses from MyVu looked like at one point in time, in a version created for the iPod.

The patents show some similarities to Google Glass both in form and in function, and there does seem to be an influence. But Google Glass is different, and Google will test to determine a final form.

Google’s “rapid” prototyping of Google Glass is worth watching as well (even though it is 28 minutes long):

Tom Chi at Mind the Product 2012 from MindTheProduct on Vimeo.

There are some “continuation” patent filings (the claims are different) so some patents are listed twice or three times together since they share a common abstract. Most of these are granted patents, but there are a few that are still pending (referred to as “applications” below, including some that describe manufacturing of some of the parts for these display devices.

It’s interesting that one of the patent filings is a binocular, or two lens display device. Some of the Glass patents from Google itself also show a two lens Glass, including one on calibrating a pair of binocular Glass (Google Glasses?), even though we’ve only seen a one lens Glass in public. 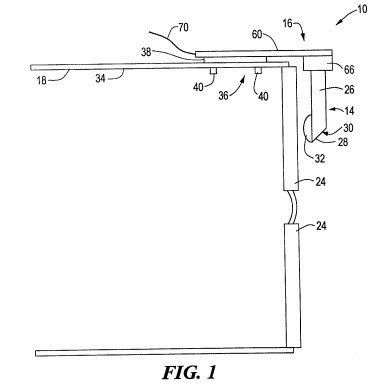 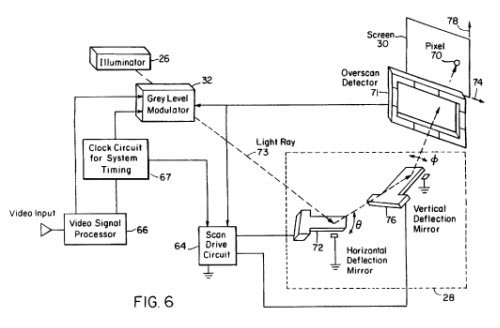 Image Combining System for Eyeglasses and Face Masks (US Patent No. 5,886,822) 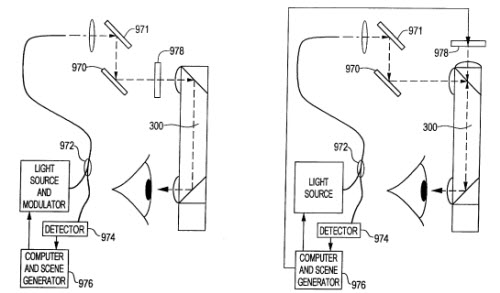 An optical system combines a first image formed by a main lens with a second image provided by an electronic display, slide, or other image source. The image combining system includes one or more inserts such as a set of reflecting image combiners to redirect light on an optical pathway within the main lens to the user’s eye.

The image combining system is highly compact, allowing the integration of a display system with eyeglasses or a face mask, such as a diver’s mask. A number of implementations of the optical system make possible other types of image integration including uses in image acquisition systems such as cameras. 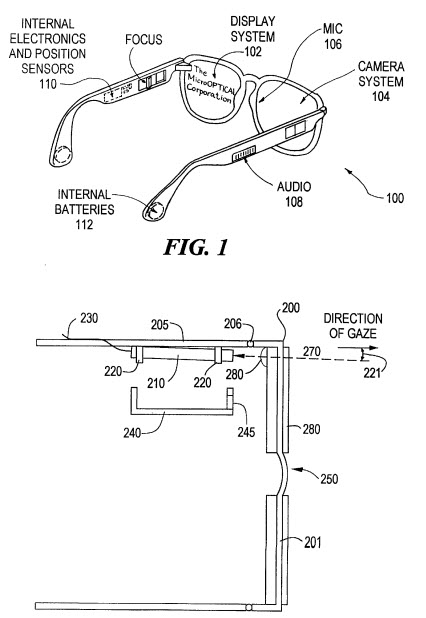 As we can see in the image below from this patent, this interface system may include image sensors that can capture video, Optical Character Recognition (OCR), and barcode information. 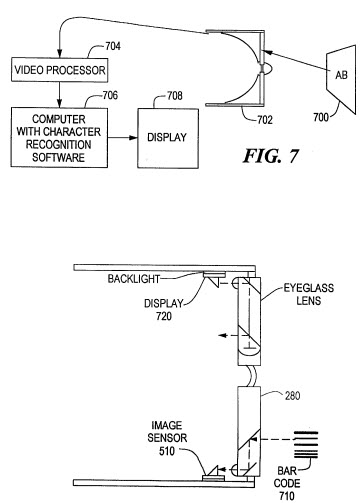 The audio or video assembly may comprise a camera assembly and/or an audio input or output assembly, such as a microphone and/or speakers. The camera assembly is placed on the temple to record the visual field observed by the user. A head-tracking assembly may be provided to track the position of the user’s head.

A number of applications can be provided with the present system, such as a telephone system, pager system, or surveillance system. The present eyeglass interface system is compact, offers the user hands-free operation, and provides an attractive appearance due to concealment of the assemblies within the eyeglass frame and lenses. 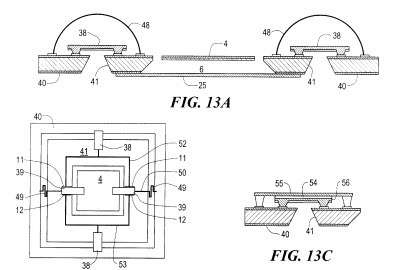 This version of the display system discusses different shaped eye lenses and includes speakers and microphones. 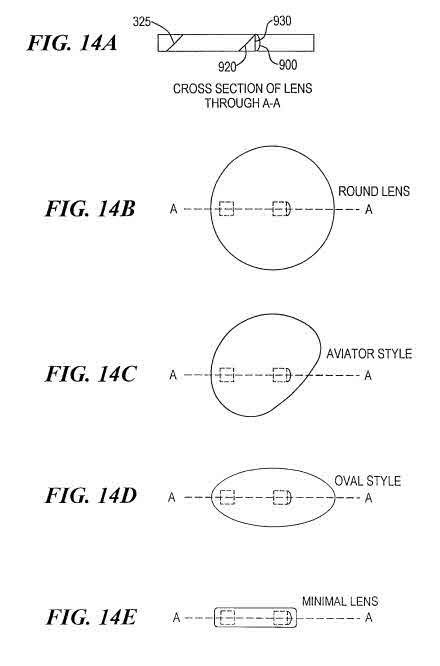 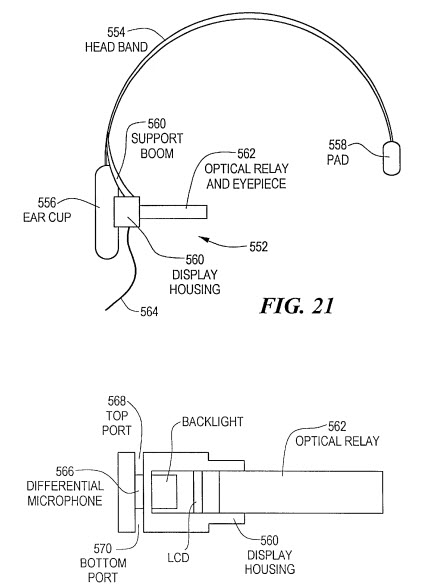 An eyepiece assembly is disposed to redirect light on the optical pathway to the user’s eye. The system is highly compact, allowing the integration of the display system with eyeglasses, a face mask, such as a diver’s mask, a head set, or the like.

Display Device with Eyepiece Assembly and Display on Opto-Mechanical Support (US Patent No. 6,618,099) 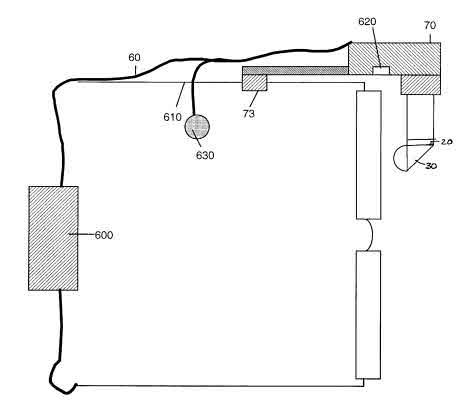 Illumination Systems for Eyeglass and Facemask Display Systems (US Patent No. 6,724,354) 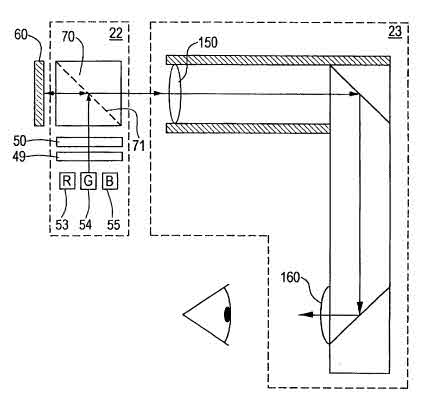 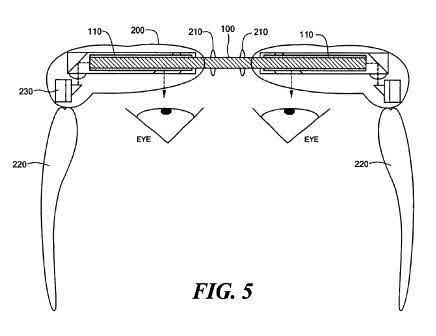 Another image from the patent showed a pair of glasses that looked a little more like the glasses shown in the review I linked to above for the MyVu glasses created for an iPod.

Accommodation for vision correction and a focus mechanism may also be provided. Also, the binocular viewing system provides a virtual image at a distance less than infinity, in an arrangement that also accommodates a range of interpupillary distances.

In other aspects, the binocular viewing system incorporates face curvature to more comfortably fit a user’s head, and places the electronic display elements close to the user’s eye, either in the line of sight, or within the nose bridging element.

An optical system for a head mounted display includes a light pipe having two parallel surfaces along which modes can travel by total internal reflection.

An illumination element allows selection of modes so that the desired modes can be transmitted along the light pipe, either axially or by total internal reflection.

Eyewear Display and Media Device Interconnection System (US Patent No. 7,663,805) 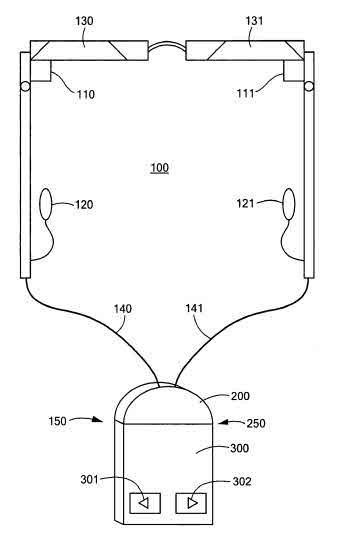 An eyewear display and media device interconnection system enables a user to connect various media devices and various eyewear or other displays to each other, by using a common interface.

Mobile Multi-Media Interface and Power Pack for Portable Entertainment Devices (US Patent No. 7,900,068) 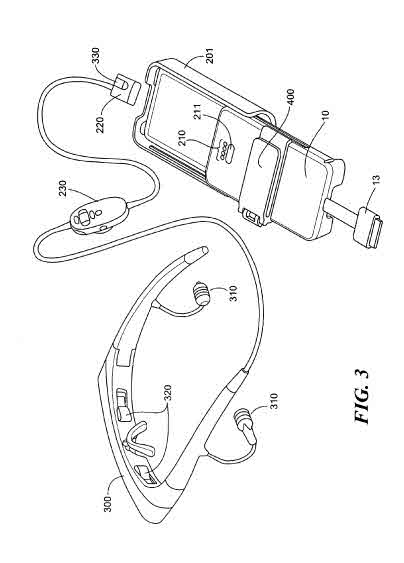 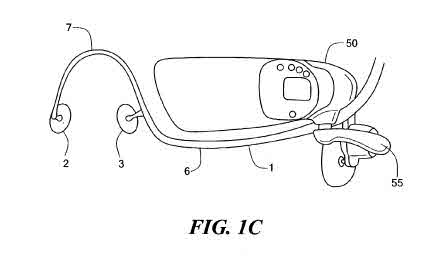 An electronic imaging system is mountable on a user’s head without eyewear. The system provides a computer monitor image or other electronic display, such as television or data display. The system provides many of the functions and advantages of known eyewear-mounted displays, but without requiring the user to wear spectacles. The system can be fit to a wide range of users without prescriptive correction or other customization.

Manufacturing Methods for Embedded Optical System (Patent Application No. US20060192306)

A method for producing a solid optical system with embedded elements is provided. The embedded elements may include inorganic, polymer, or hybrid lenses, mirrors, beam splitters and polarizers, or other elements. The embedding material is a transparent high quality optical polymer.

Method for Producing High Quality Optical Parts by Casting (Patent Application No. US2006192307)

A casting method, rather than injection molding, to produce polymer optical components and systems is provided. The casting process controls shrinkage and stress, thus providing both high bulk uniformity and high quality, accurate surfaces, by incorporating polymer films into the mold. The films may remain incorporated into the part or may optionally be removed from the part after removal from the mold. In addition, the incorporation of separately produced components within the cast part is also provided, eliminating post-casting assembly manufacturing steps

A backlight assembly emits light out of two light emitting faces using a light source such as side-emitting LEDs that send light into an optical guide or body of optical material that diffuses the light uniformly and emits bi-facially. In this way, two displays, such as LCDs, can be illuminated at the same time and the efficiency is increased. The backlight assembly can be incorporated into an eyewear system such as a binocular display system.