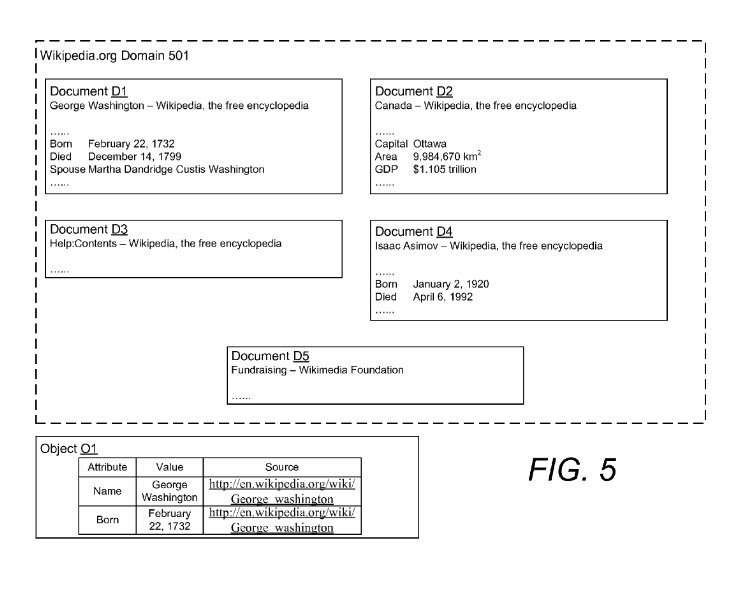 There are a number of patents from Google, both granted patents and pending patent applications, that describe ways that Google might learn about entities and about facts associated with those by extracting facts for entities from the Web itself instead of relying upon people submitting information to knowledge bases such as Freebase.

Many sites follow certain practices that help make it easy to learn about objects and facts from them. One example is Wikipedia, which tends to follow a specific pattern in how they title pages. For example, the template that Wikipedia pages are based upon using a pattern for titles such as:

There is a structure to these pages that make it easy to learn what they are about, which happens to fit what their titles say they are about. Wikipedia isn’t the only site like this, and you can see other sites doing something very similar. This kind of pattern makes extracting facts from this site easy to do.

Here is the title for the George Washington page at Wikipedia:

On the Wikipedia “Disambiguation” page, some other people with similar names are linked to and the titles for those pages follow a similar pattern. Having a Wikipedia disambiguation page helps Google tell entities apart when there might be confusion regarding who they are. Here are some titles for the other pages (and entities):

Wikipedia pages often have tables or infoboxes that contain attributes related to the objects they are about, which consist of a specific label and a value. Here’s the one for George Washington:

Components and Terms Used in this Extracting Facts Process

Janitors – There are a number of different types of janitors that may perform a different function, but all act to process facts extracted by the importer, including data cleansing, object merging, and fact induction. Correcting spelling and grammar, translation, normalizing formats, removing duplicate facts, removing unwanted facts, and so on are within the tasks that different janitors perform.

Service engine – an interface for querying the repository. It processes queries, scores matching objects, and returns them to searchers asking for the information.

Fact repository stores factual information about entities. Each Entity, or Object, real-world or fictional person, place, or thing). associates each fact with exactly one object. Any number of facts may be associated with an individual object by including the object ID for that object in the facts.

Attributes and Values Facts associated with specific entities may include specific fact types of values associated with them. For George Washington, we have a “Date of Birth” attribute, and a value of “Feb. 22, 1732.”

Tuples – The data structure of a fact might be represented by a tuple of information that includes a fact ID, an attribute, a value, and an object ID. It may actually include more information, such as a source of the fact on the Web, a language that it is stored in, and more.

The patent tells us that a couple of metrics, or indications of the quality of the facts, might also be associated and included with a fact. These include both a confidence level and an importance level. The confidence level indicates how likely it is that a fact is true, and the importance level tells how important the fact is to the object, or “how vital a fact is to an understanding of he entity associated with the object.

A Fact includes a list of sources that include the fact and from which where it was extracted, in URL, or Web address, or any other appropriate form of identification and/or location, such as a unique document identifier.

In addition, the information associated with the fact may also include the agent type of the importer that was extracting facts. So, this agent might be one that only imports facts from Wikipedia or the IMDB or some other site that may be used as a source of facts:

These are more specialized facts, with a name fact being one that conveys a name for the entity. For example name facts for the United States Patent and Trademark Office might be “PTO” and “USPTO” as well as the official name, “United States Patent and Trademark Office.” One might be designated as a primary name with the others a secondary names. They may also be called synonymous names of the object.

Property facts generally provide summary information about an object, such as “Bill Clinton was the 42nd President of the United States from 1993 to 2001.”

Objects may also have additional special facts aside from name facts and property facts, such as facts conveying a type or category (for example, person, place, movie, actor, organization, etc.) for categorizing the entity associated with the object. In Identifying Entity Types and the Transfiguration of Search @Google, I showed how Google might identify what type of entity and entity might be based upon the range of fact available for it. An actor might have facts about movies acted in, Television shows performed in, Plays appearing within the cast of. An athlete might be of a type that includes facts for statistic records for performing a certain type of sport and other facts that tend to fit that type.

Google will give priority to documents from reputable websites, such as that of the Encyclopedia Britannica Online when selecting a source document.

Of, if a certain type of fact is wanted for a display in some time like a knowledge panel (this example does not appear in the patent), the search engine might search for the entity and words representing the fact. It may attempt to find information using criteria such as “whether the object name matches document titles and whether the rest of the search terms match document contents.”

I will be writing about some other patents that were called “related” patents by the USPTO, and some of the concepts I cover will be similar.