Google has been answering queries with its search engine for over 15 years, and has been showing us it can answer questions with facts from its Browsable Fact Repository and/or the Google Knowledge Graph.

Might Google at some point bring the two together? 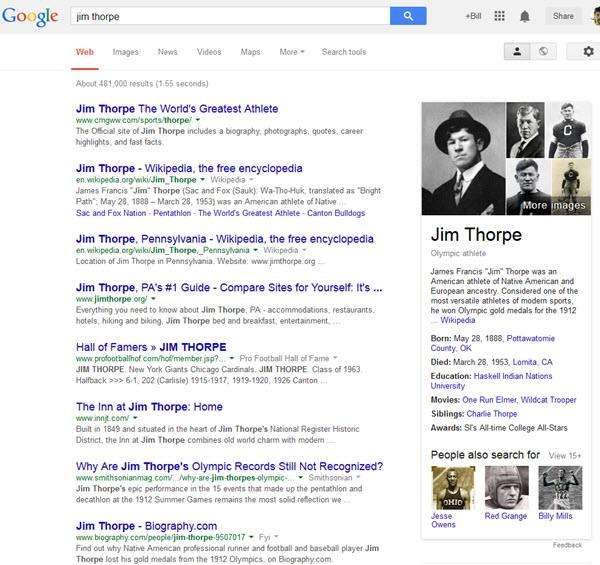 More recently, Google has been merging elements of both together as a single bundle, as noticed by Alex Chitu at Google Operating System in Inline Facts Next to Google Search Results, published on September 7th, 2014.

I tried some other queries that might reasonably be answered with a Wikipedia page in response a search query, and with facts taken from the same Wikipedia page, or possibly even another one.

In response to a number of those, I received query results for some that didn’t have a set of facts after them, like the [duchy of Amalfi] and the [king of Rome] Wikipedia results did.

But on a search for something such as [mexico], there were quicklinks linking to topics or categories from Wikipedia pages. For example, the [mexico] query had the following in those links: History of Mexico, â€ŽMexico City, â€ŽEnrique PeÃ±a Nieto, â€ŽLanguages of Mexico.

For a query such as [oil spill gulf of mexico], the quicklinks shown include: Deepwater Horizon explosion, â€ŽIxtoc I oil spill, â€ŽTimeline of the Deepwater, â€ŽCorexit. Each of those link to separate Wikipedia pages.

For a query such as [oil spills mexico], instead of links, I did get facts listed after the Wikipedia entry:

The difference between the pages that Google Operating System pointed out, and most of the ones I found is that the “facts” or topics that Google associated with my searches were bigger topics, possibly served better by a link to a whole page from Wikipedia than just some fact that could fit under the search result from the Wikipedia page.

The title to this Google patent, granted in 2011, seems to be a good fit for results snippets with both “query terms” and “answer terms”:

The disclosed embodiments relate generally to queries for facts, and more particularly, to a user interface for a factual query engine and snippets of sources with query terms and answer terms.

The patent starts out with a number of reasons why it might be used:

1. For question such a “what is the capital of Poland”, a question answering approach can provide a short succinct answer, likely to be correct. A search result is less likely to be short and focused.

In the image below, the title of the search result answers the question, but the snippet that accompanies it is pure fluff. So, the question answer OneBox and Wikipedia results answer the question quickly and well. 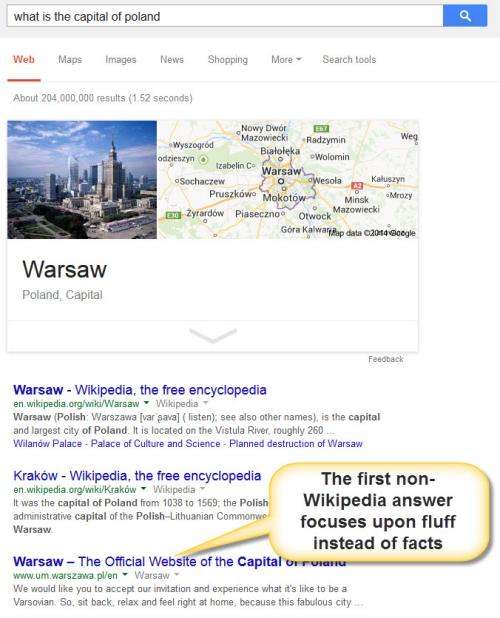 2. A single entry from an encyclopedia site might “limit the kinds of questions answered.”

The patent goes on to say:

For instance, a search engine based on an encyclopedia is unlikely to be able to answer many questions concerning popular culture, such as questions about movies, songs or the like, and is also unlikely to be able to answer many questions about products, services, retail and wholesale businesses and so on. If the set of sources used by such a search engine were to be expanded, however, such expansion might introduce the possibility of multiple possible answers to a factual query, some of which might be contradictory or ambiguous. Furthermore, as the universe of sources expands, information may be drawn from untrustworthy sources or sources of unknown reliability.

Right now, we are only seeing factual question results, or site links (see the result above for “mexico”) from Wikipedia. The knowledge panel patent for Google tells us that it tries to use at least 2 different sources for knowledge panel results to keep from having answers that are too limited, or don’t cover other things.

3. Is there is a benefit to having more than one source?

Having multiple answers means that a search engine could choose the best of those to display, or show more than one. Providing links to their sources, like the quick links do, enables a searcher to verify the answers and their sources.

As shown in this image from the patent, the query answer and the question answer could be kept separately, and each could be cached to help the search engine/knowledge graph answer questions quickly. 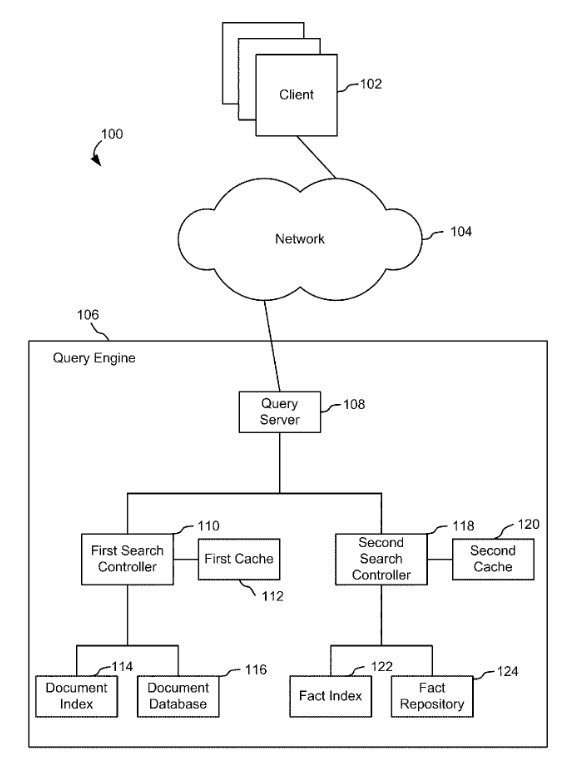 Is this a trend that we will be seeing more of, or just experimentation from Google?

12 thoughts on “Is Google Going to Marry their Knowledge Base with their Search Engine?”