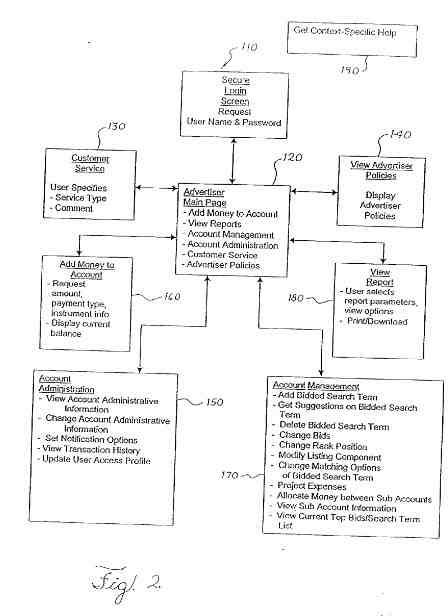 Back before, there was Yahoo! Search Marketing, and before Overture, there was Goto.com. Goto.com changed its name to Overture in September of 2001 and was purchased by Yahoo! a little over two years later for the small sum of $ 1.6 billion.

John Battelle’s book, The Search paints an interesting picture of what this search engine was like, and he posted an excerpt on his site this summer, to give you a glimpse: The Sugar Daddy: It’s All About Arbitrage.

A couple of posts ago, I noted that I was surprised by seeing Stephen Jobs’s name listed as an inventor of one of the patent applications I looked at. I was even more startled to see Goto.com listed as the assignee in another patent application this morning. This one was originally filed back before the October 2001 name change and wasn’t published for the public to get a gander at until today.

In many ways, coming across it was a little like unearthing a time capsule. You have to look in the internet archive to get a first-hand taste of what it was like, and be reminded that it has an even longer history under an older name. For example, in How We Got To GoTo, we are told that the site’s original name was the World Wide Web Worm, and before it was acquired, it was one of the first searchable sites that automatically indexed the web with its own , web crawler.

Considering that the site hasn’t been called Goto.com in more than four years and that it first arrived on the scene in the early days of the World Wide Web, it was a shock to see:

The abstract doesn’t seem like something unique or special, at least not today. I’m having a hard time remembering if it was back then. I don’t remember spending too much time at Goto.com or even looking at too many paid advertisements back then. But even in 2001, it had been more than a year or two since I bothered to create a banner ad.

The method includes receiving a search request from a searcher.

A predetermined number of identified search listings is selected according to the bid amount for a display to the searcher.

The identified search listings are arranged for display in a random order as the search result list.

The search result list is then communicated to the searcher.

This patent application read like a snapshot of what the web was like before Google even used advertising. For example, there’s a lot of optimism in the section labeled “Background of the Invention.” Would Goto have been where Google is right now if things had gone a little differently? It’s hard to tell.

3 thoughts on “A Goto.com Time Capsule: Looking at a Four Year Old Vision of Paid Search”