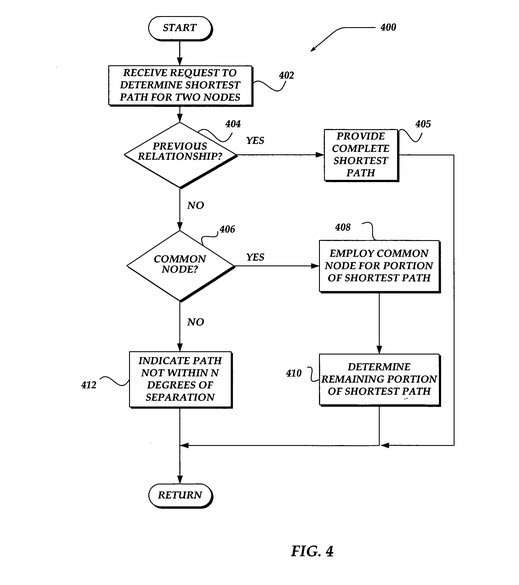 Connections Between Members of a Social Network as Related Nodes

Helping people fall in love, easier searching in social networks, and storing XML are the subjects of some newly published documents at the US Patent and Trademark office assigned to Yahoo!

Yesterday, a patent on preprocessing some of the connections between members of a social network as related nodes was granted for Yahoo!

Add to that a handful of patent applications published for Yahoo! on dating last week, and it looks like the company is working to bring everyone a little closer together:

My favorite part of those comes from the “background of the invention” section in each, which is the same for all of them:

[0003] Dating services are now so popular that by at least one study for the given year, over twenty-six percent of all Internet users in the United States have visited a personals website. Part of the reason may be that online dating may appear to be a natural extension of where people are at this point. That is, many people today have personal computers or at least access to a personal computer. Moreover, virtually everyone wants to fall in love. Thus, it is natural to merge these two things. As such, online dating services may appear as the world’s biggest singles bar. Except that it can be done in the privacy of one’s own home where time may be taken to read about another person and get to know them through email, phone, and the like, before ever going on an actual date.

[0004] Thus, there has been a flurry of companies launching services that help people to meet and develop personal relationships. Many of these companies, however, are struggling with developing additional services that will build customer loyalty. Without the ability to extend the value of the online dating experience, online dating may lose its appeal. Therefore, it concerns these considerations and others that the present invention has been made.

In another patent application from last week, Yahoo! also considers a way of storing XML documents to make it faster and easier to search through those:

A document management system manages many XML documents on an efficient and cost-effective basis. Storage requirements are reduced because compressed versions of the XML documents, which are much smaller in size than the XML documents themselves, are used when processing queries. Processing requirements are reduced because parsing is not a required step when processing queries. Instead of parsing, the query is processed by unpacking the compressed version of the document identified in the query, node by node, until enough information has been decoded to satisfy the query. Processing speed is improved in two ways. First, unpacking as carried out according to the invention is a much faster process than parsing. Second, the entire document need not be unpacked.

2 thoughts on “Yahoo patents Related Nodes in a Social Nework”