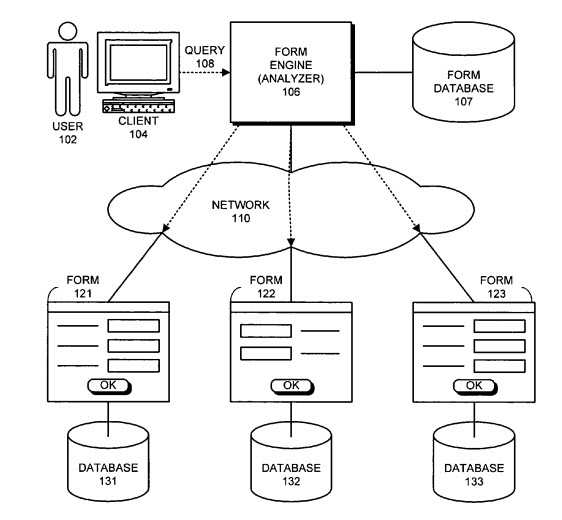 Most information on the web is below the surface, inaccessible to search engines. A whitepaper from Brightplanet published in July of 2001 explores just how much information might be hidden under the publicly available web, that could be accessed using deep web indexing

Google provides a fairly in-depth glimpse at how they might index and rank information located in sections of the deep web, in a patent application filed last week:

One embodiment of the present invention provides a system that facilitates searching through content that is accessible through web-based forms. During operation, the system receives a query containing keywords. Next, the system analyzes the query to create a structured query. The system then performs a lookup based on the structured query in a database containing entries describing the web-based forms. Next, the system ranks forms returned by the lookup and uses the rankings and associated database entries to facilitate a search through content which is accessible through the forms.

My impulse on reading the following from the patent filing was to consider that there’s a reason why many sites hide information behind logins and I went so far as to wonder whether Googlebot might logon to sites under the name Googlebot; questions triggered by this snippet:

What is needed is a method and an apparatus that facilitates efficiently searching through information which is hidden behind web-based forms.

Some of the things looked at in the patent filing:

1. How forms are found on the web that can be indexed, including crawling, manual submission, and other possible methods.

2. What kind of information is collected and indexed about the pages that forms are found upon?

3. How information about the content of forms might be collected, including gathering it from URLs where “get” statements are used, and filling in information within forms to extract outputted information from those forms.

4. Collecting metadata about the source of a form, such as a class for that source, a “geographic location most relevant to the source,” and perhaps a PageRank for the source.

5. Collecting metadata about the form itself, such as a class of the identified form, geographic location information most relevant to objects retrieved, fields, which fields are required input fields and possibly mappings between fields and associated class properties of those fields.

6. How a form may be ranked, including looking at:

1. Fields in the form–For each of the fields:

– its parameter name (used to invoke some server-side script),
– the human-readable or visible text for that field,
– field types (text, select box, radio button, or checkbox), and;
– exemplary values for the field (e.g., the options in a select box).

2. The class of the form–The types of objects that can be obtained by querying the form, such as books, hotels, restaurants. A source may have several forms, which can relate to different classes of objects. For example, newspapers often have forms for looking for houses, jobs, and cars for sale.

4. Required fields–information about which fields are required to submit the form. There can be more than one combination, in some cases.

5. Output properties–The type of information obtained from answers to a successful form submission. These are described as the “Search Ontology” properties we are likely to find in the answers.

6. Schema mapping–The mapping between the fields in the form and the Search Ontology properties. For example, a field may ask for either the ZIP code or the city and state.

If you are interested in how the deep web might be crawled and indexed, this patent application shows some strategies for accomplishing those tasks. Co-inventor, Dr. Halevy, describes some of the issues involved in attempting to index such a wide variety of information, organized in diverse ways based upon business rules that don’t anticipate indexing by a search engine, in a paper he wrote called Why Your Data Won’t Mix.

In that document, he describes some of the strategies he successfully used to create www.everyclassified.com, which aggregated content from thousands of different form sources and more than 5,000 semantic mappings of Web forms into common categories of classified ads. His company, Transformic Inc., which was acquired by Google probably in September of 2005, was the creator of everyclassified.com.