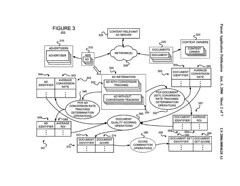 Advertising through a search engine is a little more complicated than just “highest bidder wins.” A recent Google patent application, a video from one of its inventors, and a couple of older patent applications that he co-authored show some of the complexities that an advertiser may face when wanting to advertise through a system like Adwords.

Back in October, 2005, Dr. Hal Varian gave a presentation on the advertising model at Google to a class at UC Berkeley. At the time, he had been working with Google’s Adstats team for approximately 3 1/2 years, as a consultant. It’s a nice introduction to contextual based ads at Google.

Dr. Varian is also listed as one of the inventors on number of patent applications from Google describing some of the decision-making processes that may be involved in determining which types and configurations of ads show up on content pages, and the cost of showing ads on content pages based upon ad and document scores. I’ve included links to those, and short introductions to them below.

The most recent patent application, published last week, describes decisions on which ads to show on pages. Sometimes auctioned placement alone isn’t the only decision involved. The patent filing describes some of the other considerations.

Such arbitrations on sets of ads can consider how ads, search results, colors, positions, fonts, etc., all interact with each other and affect the usefulness of the sets of ads to advertisers, end users, document publishers, and/or an ad serving entity.

Google does have a detailed description of how quality scores work in relation to the bidding for ads. If you’ve read through that information, and would like to get a little more insight into the philosophies behind the keyword and documents scores that may be used, or some additional details about this process, you may find some answers in this document:

For example, ad scores may be accepted or determined, and a document may be scored using the ad scores when served with the document and ad scores across a collection of documents to generate a document score. Each of the ad scores may indicate a value of an action with respect to an ad, such as a conversion rate, or a return on investment for an ad selection for example.

Document scores used in this way may help advertisers get a more consistent cost per conversion, or return on investment, without requiring them to enter and manage various offers for various documents and/or various ad serving systems having various conversion rates or returns on investment.

Another older patent application, this one also talks about ad and document scores in relation to decisions of what types of ads to show on content pages.

The serving of ads of different ad types, such as text ads and image ads, competing to be rendered on an ad area of a document may be arbitrated by

(b) determining a score of each of at least some of the candidate ads,

(c) comparing alternative sets of the at least some of the candidate ads to select a set that best meets at least one policy goal, and