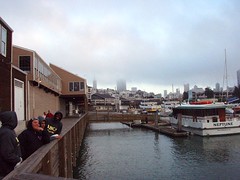 You’re walking along Pier 39 in San Francisco, and you decide that what you see in front of you would make an excellent photo. You pull out your camera phone, point it in the direction of your view of the fog rolling down the City, from the Pier. Snapping the shot, you tell your phone “vacation” and “San Francisco,” and the picture is stored in two different folders – the vacation one, and the San Francisco one. Sounds good to me.

When we think of tagging, it’s normally in the context of typing a word into a text box or clicking upon a previously created tag while labeling an image, or a link to a web page, or a video.

A patent granted to Nokia today talks about creating voice enabled tags to make it easy to file images taken with a camera phone, and similar devices.

Multiple voice tags could be used to place an image in more than one folder, and images could be stored uncategorized until later, and then organized by voice tags. The system could be used to store images on an external storage device. The nice thing about this system is that it doesn’t require any buttons to be pushed, or menus to be sorted through when tagging and organizing images at the time a picture is taken.