It’s hard to know the future of Google’s print ads program. Or on television or other media. Here’s a quick peek from an expired provisional patent from Google that may give us a hint of one possible future: 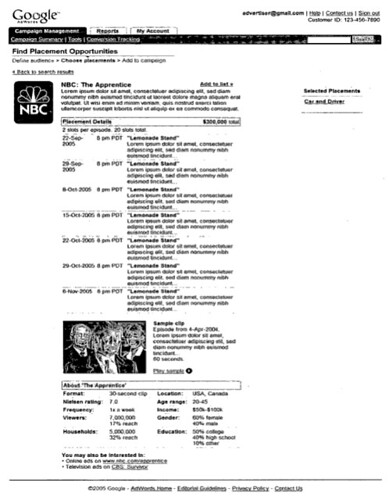 The Google Print Ads team home page tells us that the conducted an experiment with ads in premium magazine titles in 2006, and that they are “exploring ways to add value to newspaper advertising.” They ask advertisers who might be interested in participating in such tests to contact them.

Google’s patent application on advertising through print publications adds some interesting twists on the topic of offline advertising. It includes much more than just magazines the description within the document focuses upon how it would be applied to print publications. The actual patent claim goes beyond magazines:

19. The computer-implemented method of claim 18 wherein the offline property is selected from a group of offline properties consisting of (A) a billboard, (B) signage, (C) a placard, (D) a poster, (E) a banner, and (F) a sandwich board.

Processes for advertising on offline properties, such as print publications, may be improved by

(a) accepting ad creative information and associating it with an ad identifier,

(b) accepting offline property information and associating it with a property identifier,

(c) determining at least one ad, each having an associated ad identifier, to be placed in or on an ad spot of an offline property,

(e) providing the final ad to an entity for placement on or in the offline property.

Click on the images below to see larger sizes.

An overview of how Google’s offline advertising might work: 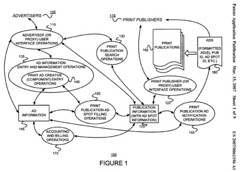 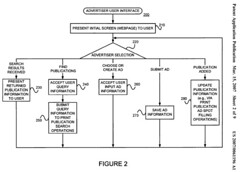 A flowchart showing how ad spot filling might happen: 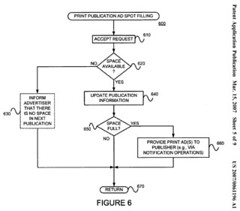 A publisher statement for print advertisements: 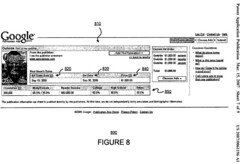 The Ad Creation Interface for Magazines: 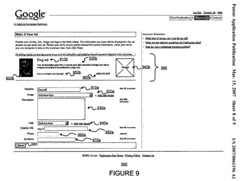 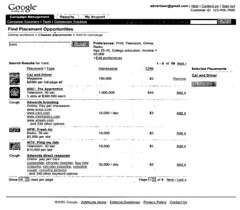