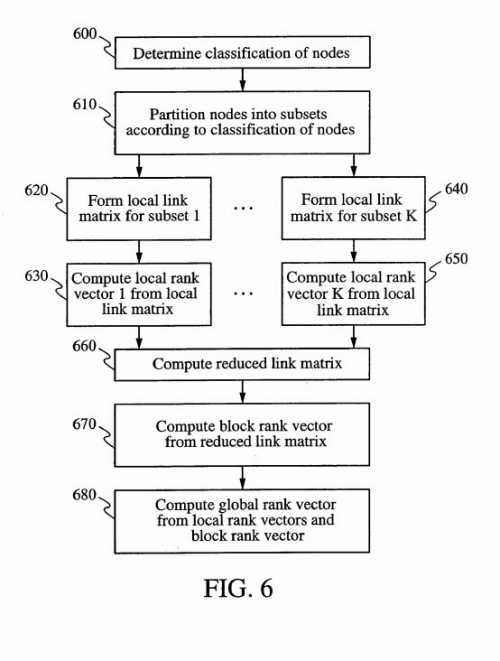 Calculating PageRank takes a lot of time and computing power. If there was a way to speed up the process, it might make a significant difference to the amount of time that it takes to assign PageRank values to pages.

On the Web, most links between pages are between pages in the same domain. That’s an observation that the process in this new patent uses to its advantage.

Techniques for assigning ranks to nodes in a large linked database, such as worldwide web or any other hypermedia database, partition the nodes so that the link matrix has a predominantly block-diagonal form.

Within each block, a local rank is computed for nodes in the block, possibly by a different computer in a distributed computing environment. A block rank is then estimated for each block as a whole, and may optionally include block-level weights to implement customized ranking.

The process described isn’t new, with the patent having been filed in 2003, and there seems to be a good deal of overlap between the process described in the patent and a paper from researchers from Stanford published in 2003 – Exploiting the Block Structure of the Web for Computing PageRank, by Sepandar D. Kamvar, Taher H. Haveliwala, Christopher D. Manning, and Gene H. Golub.

Here’s the abstract from Exploiting the Block Structure of the Web for Computing PageRank:

The web link graph has a nested block structure: the vast majority of hyperlinks link pages on a host to other pages on the same host, and many of those that do not link pages within the same domain. We show how to exploit this structure to speed up the computation of PageRank by a 3-stage algorithm whereby

(1) the local PageRanks of pages for each host are computed independently using the link structure of that host,

(2) these local PageRanks are then weighted by the “importance” of the corresponding host, and

(3) the standard PageRank algorithm is then run using as its starting vector the weighted concatenation of the local PageRanks.

There have been many other papers from Stanford which explore ways to increase the speed with which PageRank can be calculated.

Perhaps the biggest takeaway from the issuance of this patent is that the original PageRank, described in the late 1990s in The Anatomy of a Large-Scale Hypertextual Web Search Engine and The PageRank Citation Ranking: Bringing Order to the Web, has changed and evolved.

The processes that the major search engines follow to calculate a query independent score for pages (an indication of how important a page may be rather than how relevant it may be for a specific query) may not have followed along the same path as the academic research on the subject. But if you’re interested in how search engines rank pages, reading through the paper and patent (the paper is easier reading) may provide some interesting insights into possibilities along the evolutionary of processes involved in ranking Web pages.