If you were an advertising network, interested in presenting ads on a social network, what kind of advertising model might you come up with to offer the owners of that network, that might encourage people to advertise upon that site?

A recent patent application from Google explores using social profile information from members of a social network, and from their friends or contacts, to determine which advertisements to show viewers when they visit pages of that social network. 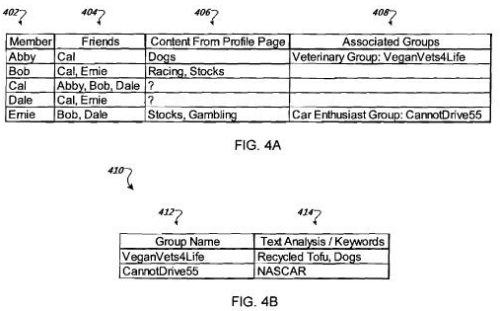 The patent filing describes a process that would look at information submitted by members about their interests as well as what kinds of groups they might be a member of, to determine what ads to show on their profile pages.

Since some people don’t provide much information about themselves or their interests on their social profiles, advertisements on those members’ profile pages might be inferred based upon profile or group membership information from others whom they might be related to in some manner on the social network.

We are told that:

The systems and techniques described here may provide one or more of the following advantages.

First, social network users can be targeted (e.g., for advertising purposes) regardless of whether the users have generated an adequate user profile.

Second, user interests can be inferred based on the interests of the users’ friends that are also members of the social network.

Third, users’ interests can be inferred based on group membership and information about the group.

Fourth, the influence of a friend’s interests can be adjusted based on the type and degree of relationship between the user and the friend.

For example, Jacob may include terms in his profile, such as “hax0r” (i.e., hacker) and “btcn” (i.e., better than Chuck Norris) that do not correspond to advertising keywords. Jacob’s profile specifies that Leah and Rachel are friends. Both Leah and Rachel include terms in their profile, such as “Ajax” (i.e., asynchronous JavaScript and XML) and Perl (Practical Extraction and Reporting Language) that do correspond to advertising keywords.

The profile information used for this method might include more than just interests listed by a member in their profile, such as:

The patent filing goes into considerably more detail on topics such as how much weight might be given to the interests of others, and how clickthroughs of ads might influence which advertisements are shown.

Another patent application published by Google this summer, Network Node Ad Targeting, took a different approach, attempting to target ads to the “influencers” of communities, by looking at members who might have the most links to their profiles (or connections to other members), and showing ads on their pages as well as community areas which those “influential” members participate.

I’m not sure how unique or nonobvious the process described in the Inferring User Interests patent filing might be, but it does provide some insights and details into an advertising model that Google might use to show ads on a social network.

There are many different reasons and motivations behind friending someone on a social network, and people who have thousands of “friends” may not have a lot of interests in common with those they have befriended.

Might inferring interests from “friends” be a mistake, or basing ads on the interests of people who are considered influencers by the number of connections that they have to others?

Something to think about – what kinds of ads would Google show on your profile page at different social networks based upon the interests you’ve listed, the blogging and other activities you’ve performed there, and the “friends” that you’ve made?

34 thoughts on “How Google Might Advertise on Social Networks”