An interesting new patent filing from Yahoo raises a couple of interesting questions about the future of the company. It describes a wearable computing device that could be used in many ways and the patent application provides a number of examples that sound like something out of a science fiction novel I read a year or so ago. 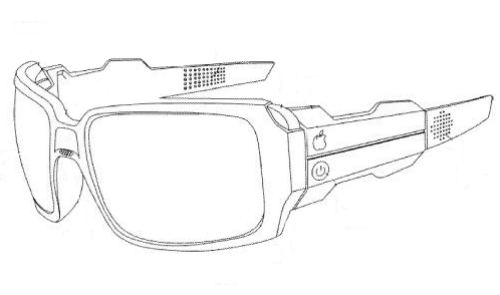 Something else that’s interesting is the apple on sidearm of the virtual goggles above, which the patent filing identifies as a visual power indicator. It looks surprisingly like something you would see on the back of an Apple laptop or on the main navigation bar at Apple.com. I don’t know if that has any significance at all, or if the creator of the image was having fun with the readers of the patent filing.

The pending patent application is:

Virtual entities are displayed alongside real world entities in a wearable reality overlay device worn by the user. Information related to an environment proximate to the wearable device is determined.

For example, a position of the wearable device may be determined, a camera may capture an image of the environment, etc. Virtual entity image information representative of an entity desired to be virtually displayed is processed based on the determined information. An image of the entity is generated based on the processed image information as a non-transparent region of a lens of the wearable device, enabling the entity to appear to be present in the environment to the user.

The patent filing goes into a great amount of detail on how such a system could be set up, and is worth exploring if you want more details.

It also includes a good number of examples on ways that this wearable virtual reality device could be used:

The same kind of virtual reality device is described in a Yahoo patent filing published last year, Virtual Billboards, which describes how advertising could be displayed to someone wearing goggles like the ones show above. 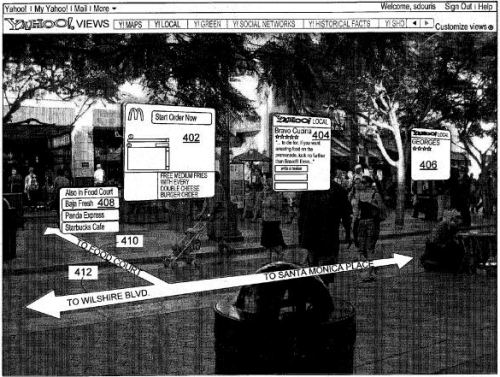 The patent filing only begins to brush at the surface of possible uses for wearable computing devices like the one it describes. Imagine holding a virtual meeting in a virtual meeting room with participants from around the globe. Or choosing to see virtual advertisements after viewing a product or barcode. Or visiting a museum that has created interactive virtual presentations.

I don’t know how novel or unique this kind of augmented reality or wearable computing device might be, and I suspect that Yahoo’s invention may brush up against some opposition from others who may be working on similar devices, but what interests me about this patent is that Yahoo would be exploring this area at all.