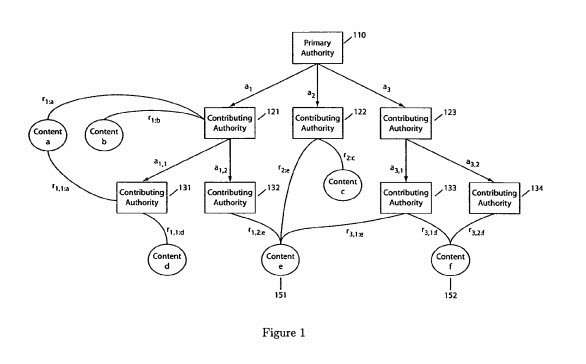 Imagine Google offering ratings where you can ask experts or authorities to rate pages on the Web. These could include scientific articles, tutorials, news stories, editorials, or products and current movies. It’s something from Google described in a patent granted to them earlier this week. It would allow for the delegating authority to experts who can improve what we know when we look something up online.

You log into an evaluation system and present what you want rated. You are then provided with a list of primary authorities. Chose them to rate your page, product, or movie. You can choose whom you might want to give authority to so that they would provide reviews.

For example, say you want to learn about Diabetes. An article about how a version of vitamin B1, Benfotiamine, may be useful in fighting off some of the damages high blood sugar might do to your body. You’d like to know what some experts in the field might think about the article. Authorities on the subject could include the American Medical Association, the Harvard Medical School, and the American Diabetes Association. Those three organizations provide ratings. You are delegating authority to experts.

Those authorities, and people whom they are delegating authority to, provide ratings for the article in a manner like you might see in Amazon.com or Slashdot.

The important part of the patent is that this rating system involves experts on specific topics. They might be delegating authority to others when providing ratings.

The ability for expert raters to delegate some or all their authority to provide ratings creates a way for the evaluation system to scale to greater amounts of content.

The Focus is on Getting Experts to Provide Ratings

The American Medical Association might delegate some of its authority to provide ratings to a team of doctors who have applied to the position. The Harvard School of Medicine might include a professor and a clinical team of students to be evaluators. The American Diabetes Association might choose volunteers specializing in Diabetes research to rate medical articles.

If the evaluators research the article I mention above, they might note that one of the authors is the chairman of the Juvenile Diabetes Association. He is the head of a research team involving Diabetes at Einstein College of Medicine in New York and has won many awards for his research. That article has been in many medical journals since its publication.

Each contributing authority, and the primary authority itself, may test one or more portions of content by associating a rating with each evaluated part of content. A composite rating for a particular part of the content comes from ratings associated with the part of the content. Preferably, the ratings combined in a manner that affords a higher priority to the ratings provided by contributing authorities to which a greater quantity of authority delegated.

The ratings provided by authorities and their delegates may then be available to others through annotations left with the pages. The patent doesn’t detail how pages appear, but they might make those available in search results or possibly on something like Google’s Sidewiki.

The ratings may reflect several different senses about the pages or products, such as credibility, trustworthiness, accuracy, and impartiality.

Primary authorities might be public entities. They could be the American Medical Association or private entities, such as individuals with trusted web presences or peers searching for evaluations.

The identities of the people providing ratings would not be anonymous.

When a primary authority, such as the American Medical Association, delegates some authority, it might start with a certain amount of authority points, like 200. It might designate 100 of those authority points to a specific doctor and 10 points each to 10 medical students working in a clinic with that doctor.

The total authority used in providing the rating would figure into a final rating when multiple sources provide an overall rating for a page, product, or movie.

Will we see a system like this emerge from Google sometime in the future?

Interestingly, the patent notes that experts or “primary authorities” could be private individuals, including peers of the people asking for ratings.

This reminded me of Aardvark, the social network search engine that Google purchased this past February when I read this patent.

73 thoughts on “The Evolution of Google Ratings (Experts Delegating Authority)?”