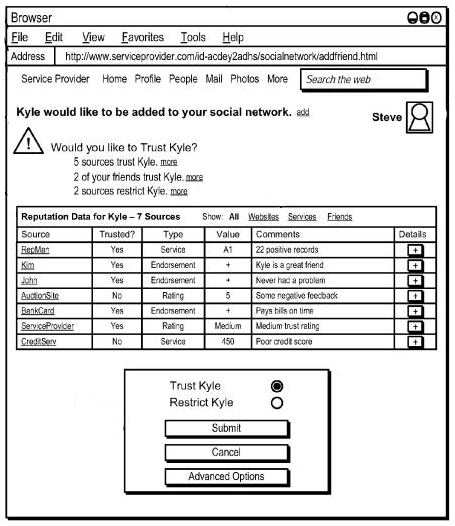 Mention the term “trusted computing” in the halls of Microsoft ten years ago, and you were probably talking about the connections between computers on a network, and their ability to communicate with each other. Today, the networking you might be talking about could as easily involve people and businesses connecting through computers on the Web.

A Microsoft patent application published yesterday describes a system that could aggregate information from a wide variety of resources, and mash them together for others to view before making an online purchase, or agree to connect to someone they don’t know over a social network.

This reputation mashup system could enable people about to make an online purchase to learn more about a vendor, such as endorsements from past buyers, reviews from sites and systems that rate merchants, and other aggregated reputation data.

When invited to become “friends” with someone on a social network, the reputation mashup could also be used to learn more about the person who extended the invitation.

The screenshot above shows a prospective “friend” and information about him from sources like an online auction site he’s done business with, and a report from his bank card. Is this the kind of data that might be included in the reputation mashup?

This system can be set up so that, based upon a reputation score associated with the aggregated data, the person using it might be blocked from making that online transaction, or accepting the social network invitation.

Microsoft could potentially make a system like this widespread very quickly as something like an add-on to their browser. Still, I have both how trusted and intrusive the reputation data they may use in this mashup. Is it necessary to know someone’s credit score or their eBay merchant reputation, for instance, before you add them as a friend on Twitter?

21 thoughts on “Who are You Going to Trust Today: Microsoft’s Reputation Mashup”