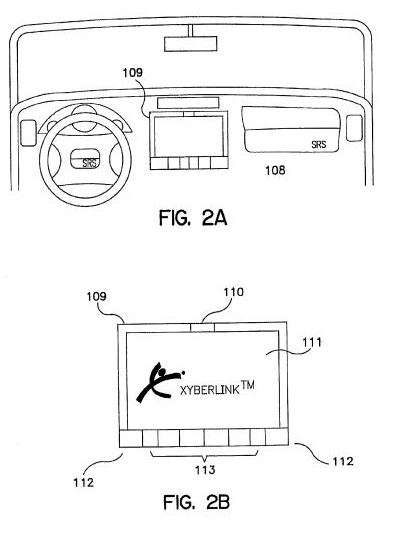 Imagine being able to subscribe to a service where public service agencies, advertisers, and friends may be able to leave you mobile messages when you drive through or arrive at a specific location.

Google acquired a series of related patents earlier this month that cover this kind of location-based service, originally filed by a Fairfax Virginia based company, Xybernaut Corporation.

A screenshot from one of the patents shows this system implemented as a navigational device, but the patent is written in a way that enables a system like this to be used by many different types of handheld devices as well. It’s possible that Google Maps Navigation could use this system, though it could also be built into other parts of a mobile phone system as well. And it has a potential social element to it as well.

The earliest of the patents was filed in December of 2000:

The present invention is essentially a method and system for leaving and retrieving messages at specific coordinate way points within a commercial mobile radio service (CMRS) provider network. Users carry or transport interface devices for communicating over the network and are able to record and view messages at specific coordinate locations while traveling in the network.

Messages can be made available to network subscribers when their interface devices come within an area centered about a physical coordinate location. Personalized messages can also be left by subscribers at any coordinate point within the boundaries of the network.

The invention can also be used to facilitate access of information about an asset when a technician comes within a physical proximity threshold relative to said asset.

This system would allow you to enter preferences as to the type of messages that you would like to receive, such as:

In addition to receiving messages, this system would enable someone to leave messages for others, or even for themselves. The patents refer to this system as one that enables subscribers

…to leave “virtual post-it notes” or “virtual graffiti” nearly anywhere. The message could even be a reminder to left by a person for himself, or a video or audio clip.

The patent also mentions that this system could be used to create “affinity groups” made up of other subscribers, which could be used to page people when other members of their groups are nearby, and message those members without that message being tied to a specific geographic location.

Another aspect covered by these patent filings is the ability to leave messages for maintenance or inspection people to go to a particular site and receive information about that site, such as repair records, date of installation, schematics, inspection data, and repair instructions.

The company that originally invented this process also worked on technology involving wearable computers, and unsurprisingly, the patent also suggests the possibility of using this technology for orienteering type games.

Advertisers could include coupons with their messages to attract visitors to their businesses.