This past October, an Official Google Blog post, What weâ€™re driving at, introduced Google’s efforts to bring self-driving cars to the world. The post told us:

So we have developed technology for cars that can drive themselves. Our automated cars, manned by trained operators, just drove from our Mountain View campus to our Santa Monica office and on to Hollywood Boulevard.

They’ve driven down Lombard Street, crossed the Golden Gate bridge, navigated the Pacific Coast Highway, and even made it around Lake Tahoe.

All in all, our self-driving cars have logged over 140,000 miles. We think this is a first in robotics research.

We were told about some of the technology and the technicians behind these cars, and the safety considerations involved in the efforts, as well as the potential of this effort to reduce accidents significantly as well as increasing car-sharing.

Last October and again last week, the US patent office recorded the assignment of a good number of granted and pending patents from IBM on a wide range of topics, and I’m making my way through them.

Many of those involved making automobiles smarter and safer and may have addressed a number of the issues that need to be solved before self-driving cars may progress from Google research project to consumer use.

I thought they were interesting enough to share, and have provided links to the patents themselves if you want to take a deeper look at the technologies involved.

Warning Sensors for Objects on Vehicles

Ok, I’m going to start with what seems to be the silliest of the patents and get it out of the way first. 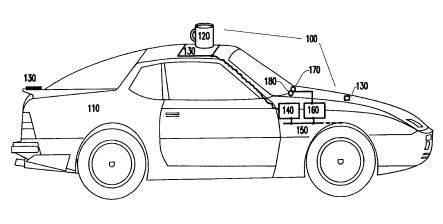 A user of this navigation system can enter information about the first few navigation points on a journey, and if the navigation system recognizes those as part of a known route, it will automatically determine the destination, and the rest of the route to follow.

A system that determines information about the state of a driver, such as whether or not the driver might be sleepy or distracted, and make take steps to make things safer.

Cars would include an array of sensors and wireless systems so that information about them could be shared with other vehicles’ drivers. For instance, if a car ahead starts braking hard, a car behind it would be warned. Warnings about vehicles traveling very slowly ahead could also be transmitted. 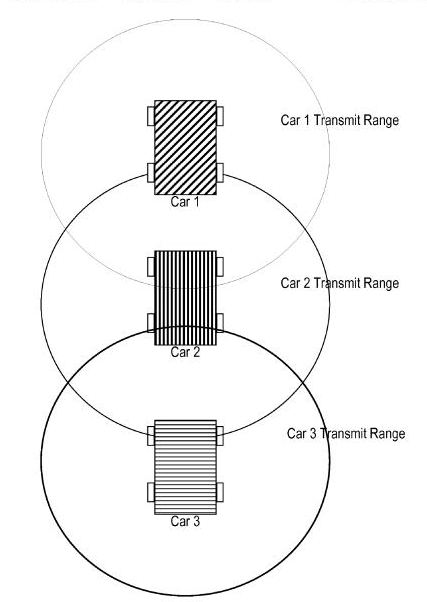 A monitor inside of a vehicle can detect events related to the vehicle, such as speeding, operating in a prohibited area, or during a specific time frame. It could send a message wirelessly, and an action might be taken in response via an in-vehicle controller.

Those actions might include turning off the engine, limiting the speed of the vehicle speed, and possibly locking the vehicle doors for purposes such as terminating a pursuit or enforcing legal sentences and operator restrictions, or controlling fleet vehicle operations.

A certain limitation could be set upon the use of vehicles involving when and under what circumstances they might be driven. For example, a manager of a fleet of trucks would want to ensure how and when and by whom those trucks are driven.

There may be limitations on when young drivers can drive (daylight hours only, for instance), or other restrictions or limitations for other drivers. This system would also work to keep unauthorized drivers from driving the vehicle.

Limiting and controlling motor vehicle operation functions enabled for each of a group of drivers of the vehicle
Filed September 16, 2004
Granted February 5, 2008

Limiting Wireless Communications Based upon Speed of Travel

Imagine your phone not letting you make or receive calls or text messages or check emails when it’s traveling at a certain speed. All three patents below address this problem. In the first two, if you stop for a traffic light or stop sign or pullover, those features may be enabled. Once a certain speed is met, those features may become unavailable. 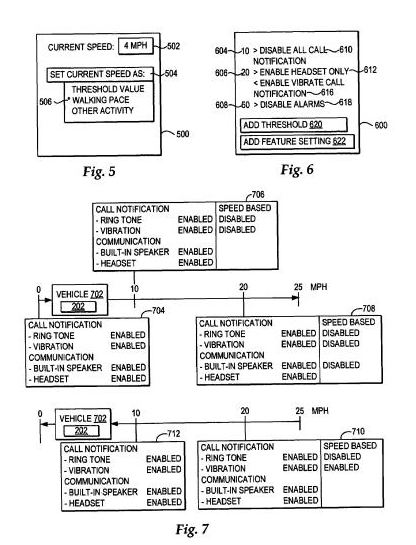 Communication devices might be disabled in response to vehicle conditions such as sudden changes in velocity or acceleration, and rapid changes in direction. Or by laws of certain locations regarding the usage of mobile devices in vehicles. Other conditions might include weather, available light, and traffic density.

Real-time traffic information could be used to identify the best or fastest route to travel.

Method and apparatus for displaying information in a vehicle
Filed September 14, 2000
Granted March 12, 2002

An in-car display might show information about traffic signals and stop signs ahead, which could be useful on a foggy day or when the signals might be around a curve or hidden by a rise and fall in a roadway ahead.

Information via GPS about the Legality of Devices in Cars

In some places, the in-car operation of things like radar detectors, cellular telephones, and DVD players may be legal, and it others they may not be. The system described in the following patent would help provide local law information about whether or not it’s legal to operate those devices.

Photosensors on the front of your car might detect when brake lights are illuminated in front of them, and calculate their distance. Within a certain distance, the brake lights of the car with the photosensors might have their brake light illuminate, without actually activating the brakes, to give a warning to the car behind.

Lane changes and turns aren’t always communicated well by drivers using turn signals or brake lights. Sensors that can determine things like whether a car’s steering wheel is being turned for a lane change might be communicated to cars behind it directly or in adjacent lanes to provide a warning. 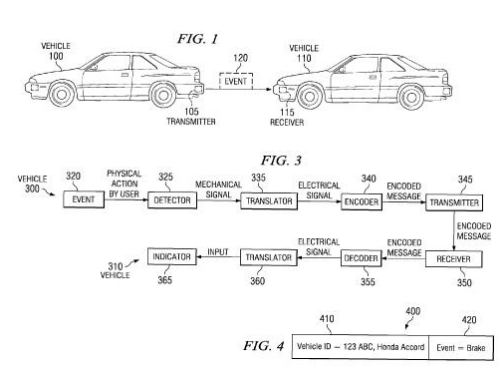 Method and system for sending events between vehicles
Filed May 9, 2006
Granted October 28, 2008

The system in the following patent calculates a safe following distance based upon things like speed, weight, and/or safe braking range values, and turns on a recorder if the distance becomes unsafe.

Light beams might be projected to calculate distances to objects in front of or behind a vehicle. These objects could include things like parking lot walls.

A phone or other device that uses a wireless transceiver may be set up to be used through an onboard system on a vehicle so that its use could be limited or disabled in certain situations.

Like a number of the other patents included in this post, this patent aims at considering unsafe conditions concerning the surrounding environment, a vehicle and its driver, and communicating that information to surrounding vehicles to enable them to take action, such as slowing down. This one includes information about safety features on other cars and possible problems with those vehicles themselves.

Predicting Destinations Based upon Travel Patterns and Behavior

The following patents describe how a navigation system might be used to predict a destination based upon past journeys. A system like this might be used with real-time route information to help find alternative routes to a projected destination, though the patents don’t spell that out. 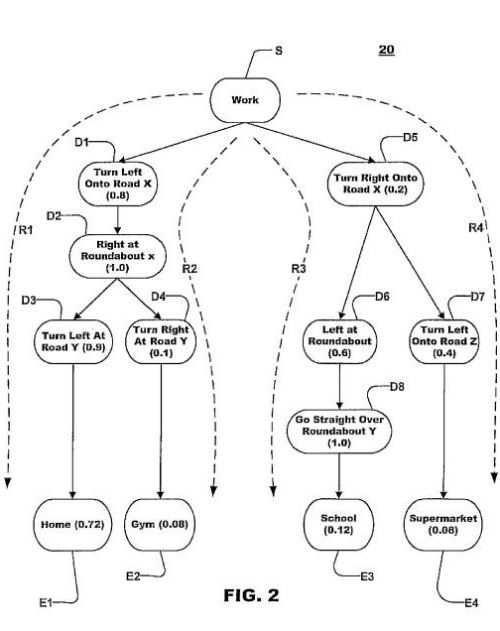 The idea is to provide evidence about whether or not a wireless call might have been taking place at the time of an accident.

System for transmitting to a wireless service provider physical information related to a moving vehicle during a wireless communication
Filed November 1, 2004
Granted December 26, 2006

This monitoring system might enable someone to track a vehicle’s location and speed. The location could be used to find speed limits at that location and other relevant information.

If the vehicle exceeds the speed limit, a warning could be sent to the driver by a visual or audio signal, inform “an authority agency” about the speed, and log information about the “excessive speeding condition.” Speed could be monitored by the use of GPS or by the vehicle’s speedometer or by both.

A touch-based system for controlling things like windows, heating and airconditioning, door locks, and more, might use a touch gesture-based system that might also include controls based upon speech and upon facial gesture recognition. 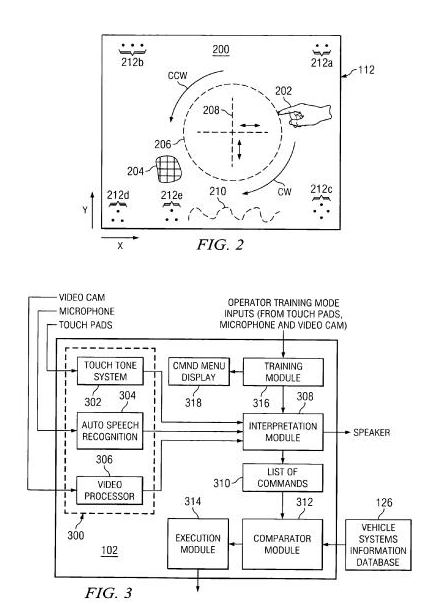 Collision Avoidance Based Upon Communications between Cars

The following describes a collision-avoidance system using “underutilized processors” found in airbag deployment systems. This system would avoid using a radar or GPS to become alert of the possibility of a collision, and would instead depend upon local information involving communications from sensors in one vehicle to sensors in another. 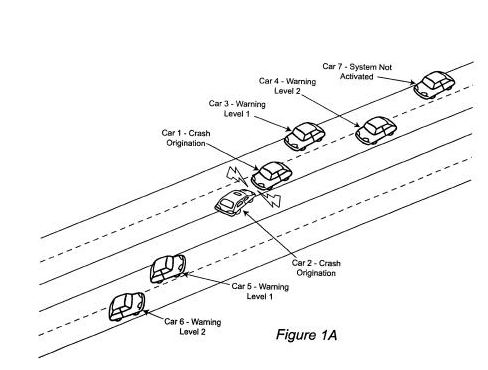 Keeping a safe distance from the cars in front of you and behind you is one of the challenges of driving. Tracking the cars that might be in lanes adjacent to yours is important as well. The following describes a process to track the speed of vehicles in the driving environment around you, provide warnings, and possibly change the speed of your car.

If a child is left unattended in a safety seat of a vehicle, the sensor system described in the following three patents activates an alarm and will unlock doors and roll down windows.