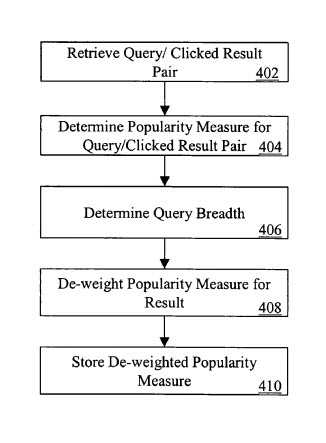 What is query breadth, and What Does it Mean for Search Results Rankings?

How much weight do the keywords in your page title carry in search rankings? Or anchor text in a link pointing to that page? If I told you that the weight carried by different ranking signals could vary based upon many circumstances, that might be a little frustrating. Unless I could point out a good example of how a search engine might devalue the impact of some ranking signals, and in doing so, boost other ones.

A Google patent granted today explains how something called “query breadth” can influence the weight of popularity-based ranking signals, and in doing so, alter how much weight relevance-based signals might carry.

Query Breadth can mean the number of results returned by the search query, the length of the query, the IR score drop-off, or some other measure of breadth.

When someone searches at a conventional search engine, they see a specific order based on several ranking signals. Google has told us that they consider at least 200 different signals. Those can involve such things as whether the terms used in a search query appear on pages. Or the quality of links pointing to those pages or many others.

Other signals might be important or popular, such as the quality and quality of links pointing to a page. For instance, a link from the New York Times front page might carry more weight and provide a greater popularity score than a link from the front page of my local bi-weekly paper, the Fauquier Times-Democrat.

Search engines often return many pages when someone searches for more common one or two-word phrases, such as [digital camera]. These can often be in the millions. A vast number of people tend to search for more common phrases like that one as well. The chances are that people performing that search may click a lot on links to web pages that show up in the top results for that search. If the number of impressions or clicks for those results is a popularity score, those top pages may be over-represented in popularity counts.

That kind of over-representation of user-behavior data may make it so that other results for broad queries may have considerably lower popularity scores and have difficulties outranking the more popular pages. That is even if the owners of those pages make changes to make those pages more relevant for those particular queries.

Because of that, when a query is a broad one, a search engine might not give as much weight to popularity-based ranking signals. Which would mean that relevance signals would, in turn, have more weight?

Methods and systems for adjusting a scoring measure based on query breadth
Invented by Karl Pfleger and Brian Larson
Assigned to Google
US Patent 7,925,657
Granted April 12, 2011
Filed: March 17, 2004

Methods and systems for adjusting a scoring measure of a search result based at least in part on the breadth of a previously executed search query associated with the search result are described.

There are a few different ways that a search engine might measure query breadth, and it may consider these in combination with each other:

Some queries might be short or searched frequently but still be very narrow queries, so a combination of measures like those listed above.

We don’t know how much weight Google might be giving to popularity-based user-behavior measures such as impressions and click-throughs in search results. They may be giving some weight to those.

We also don’t know much of the rankings between web pages that appear in search results for particular queries. When someone searches, the first result might be considerably more relevant for the query used than the second result. Or it might be a photo finish between the two. We also don’t know how closely the first search result and the 10th result or the 100th result might be in terms of an information retrieval score.

We know that it’s often more likely that the higher ranking results will get seen and clicked on more often. They may increasingly grow in terms of the popularity-based aspect of ranking pages. That can potentially keep pages that increase in a relevance-based part of their ranking scores from outranking pages that continue to grow in popularity.

This is just one example where the actual weights of different ranking signals may vary based upon a specific circumstance, such as query breadth. Chances are there are many others as well.

So, when someone asks you how much weight a title element carries when it comes to search rankings, and you answer, “It depends,” and they ask you for an example, query breadth is one that you can now point to as a possibility.

36 thoughts on “Time to Add Query Breadth to Your SEO Glossary?”