Back in 2005, Google filed a patent application on Ranking video articles which gives some insights into Google’s future plans for what they might do with video, and some of the possible ranking algorithms they would consider using.

Google Video search went live in January of 2005. Its focus was on helping people find videos on the Web and on television, and providing a place for people to upload videos that could be watched from the service or embedded on other sites. The patent shows a screen that would allow you to enter your local TV provider: 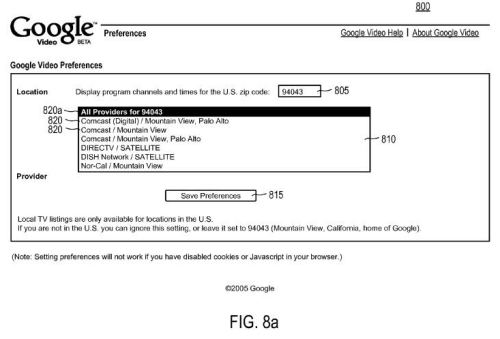 When the patent was filed, it appears that Google Video would be the central hub of all things video-related for Google. But those plans seem to have changed with the acquisition of YouTube, the development of Google TV, and the growth of Android.

If you watch movies on your phone or surf the Web on your TV, the chances are that you’ve seen something about Google TV or Google Android. Google has been focusing upon an android powered device that can make it easier for people to find television programming they want to watch, and visit websites on their televisions. Both Google TV and Google Apps for Android contemplate a much larger role for video on both TVs and telephones.

Back in February, I wrote about How a Search Engine Might Rank Videos Based Upon Video Content, describing a recently published Google patent application telling us that the search engine might capture many frames from videos and use a “similar image algorithm” to tag frames in those videos with relevant keywords.

The approach in the patent filing also included a sound fingerprinting technique that would capture sounds as electronic images and match those sounds from the videos with known sounds from other sources to tag those with keywords as well.

This older granted patent from Google anticipates the use of similarity algorithms like that and a wide range of other signals that might be used together to rank videos in a video search.

The video search would include videos found across the Web, videos hosted by Google Video, and videos that might be presented on television.

Queries used in a video search might be text-based, with searchers entering keywords in a search box.

Queries could also be image-based, with searches of videos based upon an image that a searcher might upload.

A video search might also be started by someone selecting content associated with another video, such as highlighting text from closed captioning data to use as a query to find other videos.

Our technology examines dozens of aspects of the videoâ€™s content (including the number of hits and rating) to determine if it’s a good match for your query.

So just what kinds of things might Google Video be looking at to rank videos?

The patent provides some clues:

An information retrieval system is provided for processing queries for video content. A server receives a query for video content and returns video articles, as received from broadcast systems or other content providers. Queries are formulated using text, video images, and/or visual content associated with a video article.

Various video-oriented characteristics associated with the results of the queries are determined, and a rank score is calculated for each. The ranked video articles are displayed in a representation to the user, from which the user can play the video article either within the representation or independent of it.

If you have uploaded a video to the Web in the hopes that people find it, and view it, it doesn’t hurt to think about how the different ranking signals listed in this patent might influence how easy it is to find that video. Keep in mind that some of the videos that might have been found through Google Video were intended to be viewable only on television, and some of the ranking signals included are aimed specifically at that content.

Here are a number of the signals that Google might consider in ranking videos for a video search.

As I mentioned above, a number of these signals are more appropriate for a search of broadcast TV (or Cable TV) content than for videos uploaded to web pages, and could potentially be included in a search for programming through Google TV. It’s possible that many of these may or could be included in the search function at YouTube and at Google Video.

It shouldn’t be a surprise that Google is looking at the text associated with a video, such as titles or descriptions, as well as user data, such as the number of plays and ratings. The signals that may be used for television-based content such as Nielsen Ratings or broadcast source or broadcast time (prime time or daylight shows or Sunday morning news) likely won’t play much of a role in the ranking of web-based videos.

But one thing I found interesting was that pages or other documents that reference a video might also be included as a ranking signal for that video.

We aren’t given much in the way of details on how these different factors might be weighted against each other, and it’s possible that in the five years since this patent was originally filed, other signals might have been considered as well. But if you’re considering how Videos might be ranked presently and in the future by Google, this isn’t a bad list to start with.

27 thoughts on “The Google Video Patent”