Maybe a better question is when TV set-top boxes will allow people to interact with others on their TV screens when watching? A patent filing published at the end of May shows one possibility that we might see in the future for making TV more social. 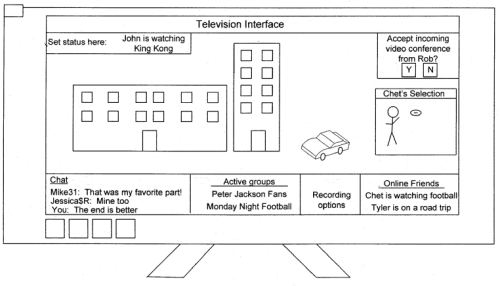 In addition to enabling television and social networking to be available via a real-time interface, the set-top box might allow people to preconfigure access to different social networks based upon channels on the television or certain time ranges.

For instance, you might associate ESPN with a Twitter Red Sox Fan Group at @Rdsxfans, as seen in the user interface screen below, or chat access to a specific person on Facebook between the hours of 7-10 pm: 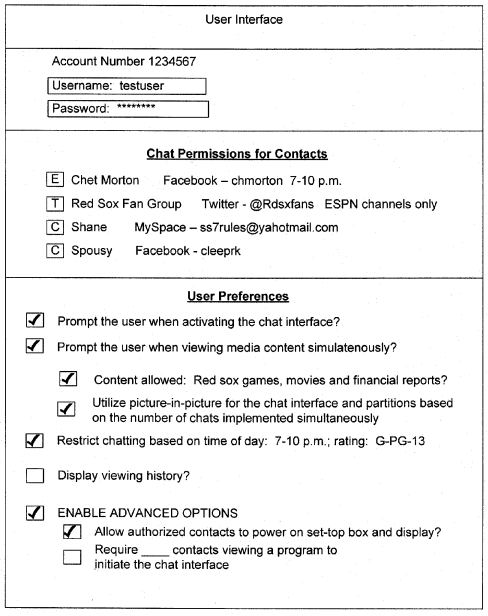 The ability to associate a specific channel with specific social network walls, contacts, or chat interfaces is interesting. Imagine watching the game along with a dozen or so friends, each from the comfort of your own homes.

Or imagine watching that same game while having tweets available from ballplayers, sportscasters, and other team fans, and accessing additional news, film, images, videos, and other information about the game while watching.

An interface like this might enable you to catch a movie or TV show together with friends or family members remotely, watch the news or public policy programming with an organization that you’re a member of, or with a very informed audience who may have interesting and significant viewpoints to add.

Imagine watching, for instance, the State of the Union address along with members of your state or national political party, or with a public policy think tank, you might belong to, or with analysts from a television network.

This system might also enable you to search for and switch over to televised content being viewed by a social contract.

A picture-in-picture feature might allow for live-time video chatting while watching television broadcasts as well.

Will we see either Apple TV or Google TV start integrating social networking features into what they offer sometime in the future?

Apple has a past history of attempting to converge television with computers with the Apple Interactive Television Box in the mid-90s and the Macintosh TV in the early 90s. Maybe adding a social aspect to TV is a difference that would make a difference?

Google TV’s main innovation seems to be integrating search capabilities with television and bringing Web video to the TV box. Given Google CEO Larry Page’s recent mandate to Google employees to make Google more social, it wouldn’t be a surprise to see Google sprout ideas on how to make watching a TV a more social activity as well.

Google has published many patent filings that involve searching for or scheduling television broadcasts or performing analytics on viewership for advertising purposes. Still, none of those appear to include a social aspect. They’re still worth a look, especially since some of them describe possible revenue models that Google might use on television screens:

66 thoughts on “Will Social Networks invade Your TV?”