A Google patent application published in early May explains why Google might start showing social answers in Google search results. The basic premise is that some types of questions are best answered by library-type results, and others by a village paradigm approach to information retrieval. In a village, people disseminate knowledge socially, with information passed from person to person, and retrieving information involves finding the right person instead of the right document.

Here’s how a social answer to a query might appear in Google’s search results: 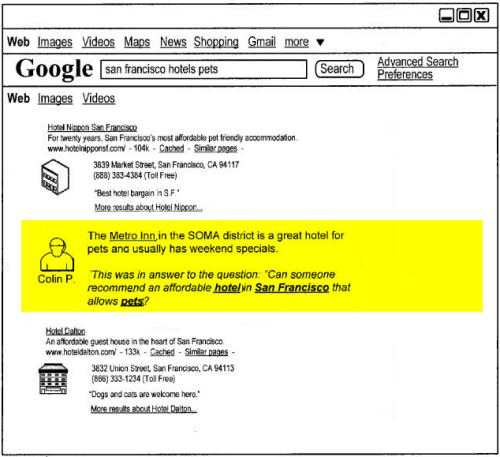 Will social Questions & Answers (Q&A) service become part of Google’s push towards the use of social networking to help people find answers to their questions? I’ve seen speculation that such a Q&A service might become part of the newly launched Google +, and that this service might be based upon Aardvark, which Google purchased in February 2010. If you missed out on the acquisition of Aardvark, I wrote a little about it in Yahoo’s Social Search Answer to Google’s Aardvark?.

There I also pointed out the white paper that the team behind Aardvark published, The Anatomy of a Large Scale Social Search Engine (pdf). The title for that paper cleverly adopted part of the title from one of the papers that helped start Google, The Anatomy of a Large-Scale Hypertextual Web Search Engine. In a blog post, the Aardvark team wrote that they were inspired by the Google paper.

Now it appears that Aardvark-type social answers may become answers that appear in Google Search results, as seen in the Google patent application from May. Given Google’s latest foray into social networking, it’s also possible that a question and answer service based upon Aardvark might play a larger role in Google’s social networking applications.

I would go into more depth about how the question and answer service works here, but I think you might be better served by spending time with the Large Scale Social Search Engine paper. Instead, here’s the Google patent application:

Methods, systems, and apparatus, including computer programs encoded on a computer storage medium, for a social search engine. In one aspect, a method includes receiving a question from an asker in which the question is associated with one or more topics; selecting candidate answerers based at least partly on each answerer’s respective relationship to the asker; sending the question successively to groups of one or more candidate answerers according to the ranking until an answer is received from a particular one of the candidate answerers; and sending to the asker the received answer and information that identifies the particular answerer.

The patent is assigned to Google, but the inventors listed are originally from Aardvark.

In the patent filing, we’re told that answers that were previously submitted to the Q&A system that are relevant to a search query might be included in search results. These answers would be taken from an archive of questions and answers, and either indexed by topics, or by sequences of words that appear in those answers.

Some of the ways that answers might be determined to be “relevant” may be if keywords appearing in queries are matched by those same keywords appearing in questions and answers. If a URL appears in an answer, and that URL is also included in a set of search results that are relevant to a query, that may also be a sign that a particular answer is relevant to the query as well.

Other signals may also be used to determine whether an answer from the Q&A archive is relevant to a search query.

Not explained in much detail, we’re also told in the patent filing that content from other sources might be included as well, such as from blog posts and microblog posts. Would Google Circle posts be included in search results as well?

They might, but I see them having the most value if they were included in the Real-Time results that are sometimes presented in a scrolling frame in Google’s search results since their most value might be as timely tidbits of information relevant to something that may have happened recently.

If you’re interested in how those real-time search results are displayed by Google, a patent application published last week, Presenting Real-Time Search Results, provides some approaches that Google may be following to show off those results. Unfortunately, it doesn’t go into much detail in describing how Google determines which results to display, and filters out as possible spam.