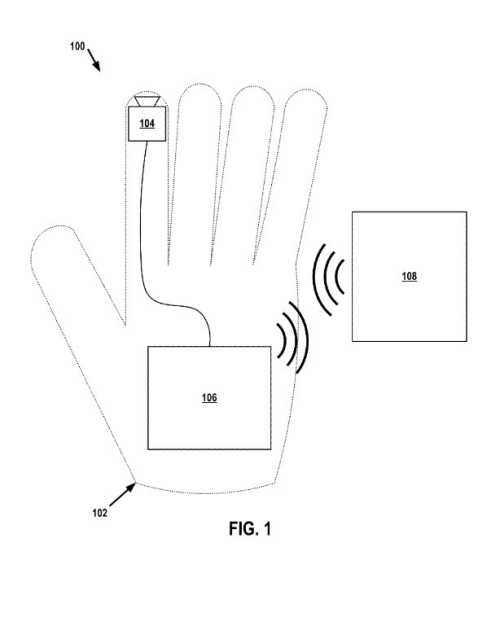 It’s not related to search, or to SEO, but it’s one of the more unusual and interesting patents that I’ve seen come out of Google in a while, and Google Founder Sergey Brin is listed as one of the co-inventors. Google was granted a patent today on a visual sensor device that could allow someone to view their surroundings through their hands or other parts of their body, with a detector that might be channeled to a wearable display.

This new patent might in part explain why Google acquired the patent I described in “Google Acquires Swimming Goggle Patent.” While the swimming goggle patent is interesting in its own right, and I’d love to see a version that could be used when jogging or bicycling, it’s also the kind of wearable viewing display that could be used with this alternative visual sensor.

As a device on a glove, a control for the viewing device might be built into the glove so that a predetermined motion might trigger the use of the viewing detector. The patent allows for the visual sensor to be located elsewhere on a body as well, so for example, the idea of having eyes in the back of your head might not be unreasonable.

This visual sensor might include a camera or other viewing device, could be configured to detect light from infrared or ultraviolet lith or x-rays. It could have a three-dimensional spatial range and possibly perform image processing and analysis on recorded images. It might also have a stabilizing function like many modern cameras do to stablize images. Also like a camera, it might come equipped with a flash or another method of illumination.

An alternative example described in the patent would include a motion detector and an accelerometer and/or a gyroscope. Motions might be useful in running applications such as word processing, running a spreadsheet, or an email application.

Another description of a different implementation of this visual sensor could include more than one detector so that the relative motions of the detectors could be used in applications such as communicating in American Sign Language or simulating typing upon a keyboard.

The patent provides more details on how a wearable visual sensor like this could be used. The patent is:

The disclosure describes methods and systems for gathering and conveying information, for example, such as with a hand of a user. In one embodiment, the method may include using a detector to record a series of images of an environment and detecting a predetermined motion by comparing two or more images in the series. The method may include selecting a function based on the predetermined motion and triggering the function.