Imagine being able to highlight any text on a web page and search the Web based upon that text? Or an easier way to embed videos or other content in windows that will appear and open up without launching a new browser window.

Now imagine that your Google Plus Circles could engage in friend relationship management, being better at self organizing by grouping people whom you add to your Google Plus Account by whether they are co-workers, or if they live nearby, or the kind of company they work for, or the school that they went to or many other ways that might make circle management smarter and a little more fun. Now imagine that the technology behind that involves the use of intelligent social media agents that keep an eye on the social activity of your contacts.

One of the companies that Google acquired is Apture, a business started by Tristan Harris and Can Sar, a couple of Stanford students in 2007. The Apture Website notes that the Apture team will be joining Google’s Chrome Team. That makes sense since Apture specializes in making browser experiences richer by proving text boxes that pop-out when you click upon links on a page. Apture was supplying these types of features for a number of partner sites as well as a plugin that would work with Chrome, Firefox, and Safari.

This first image is the Apture homepage with the notice that they’ve been acquired by Google. I highlighted the word “Google” on the page, and a caption box appears above my highlighting with the caption “Learn More” appearing within it. Note that there are a couple of links on the page as well that have different kinds of icons in front of them, signifying that they will launch different types of boxes that display certain types of information. In front of the link with the anchor text “truly experience” is an icon that looks like an open book. Immediately before the anchor text “Chrome Team” is an icon that looks like a film strip. 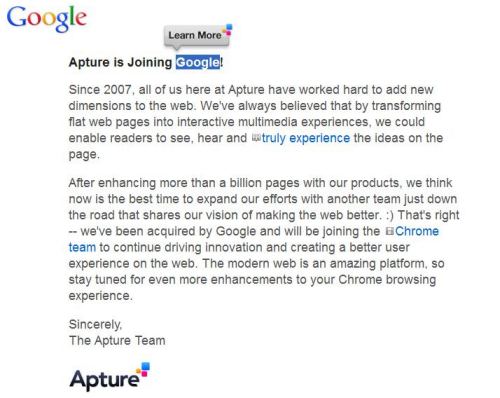 When I clicked upon the “Learn More,” a information/search results window opens on the page without launching a new browser window. Note that the box has three tabs, with the first labeled “explore,” which includes an informational annotation followed by search results. The second tab is labeled “videos,” and shows a number of videos in response to the word that I highlighted. The third tab is labeled images, and includes a number of images in response to my highlighted search term. 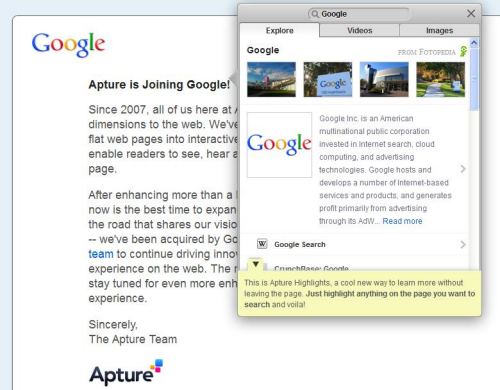 In this third image, I’ve clicked upon the link with the anchor text “Chrome Team,” with the filmstrip icon in front of it. A YouTube video appears about Google Chrome. 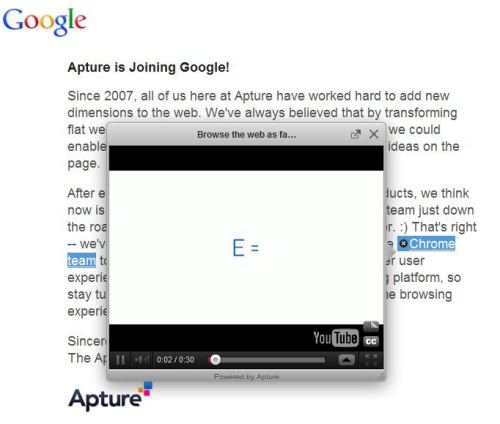 The other company is Katango, and they published a note on a page which redirects from the Katango.com page to an Amazon hosted page, that the company was acquired by Google and that they would be joining the Google Plus team. The chairman of the company is Yoav Shoham, a professor at Stanford University. The company was originally named CafeBots, and has described what they do in the past as Personal Crowd Control.

Apture makes it easier to search from any page on the Web, and to more easily embed different types of content on web pages. Kantago could make managing your Circles on Google Plus much easier.

Here are the patent application filings that are available at the USTPO. It’s possible that both companies may have more filed that haven’t been published yet.

This patent application describes a layout manager for determining where an interactive window might appear upon a browser page.

The present invention relates to the automated layout and scrolling of windows.

The patent filing description starts off by pointing out that the process described in this application differs from the embedding of videos or other objects into a page.

Annotations using intelligent windows might be added by visitors to a webpage. This could be limited to the owner of a page, or expanded to others who visit the page, in wiki like fashion.

Method of enabling the modification and annotation of a webpage from a web browser
Invented by Can Sar, Jesse Young, and Tristan Harris
US Patent Application 20090199083
Published August 6, 2009
Filed: January 21, 2009

The present invention relates to enabling the modification and annotation of any webpage from a web browser by any user (with appropriate privileges) without the need for custom plugins or browser extensions.

A system and a method are disclosed for a configuration in which any user interface feature that would otherwise have been hidden while the user is interacting with the rest of the web page are made available at the top of the web page.

What we’ve heard about Katango’s capabilities includes a friend management program that can make circle management easier. But this patent filing goes beyond that by introducing a social media agent that can act on behalf of someone to capture information about other people’s activities on multiple social networks, and perhaps present that information in dashboards. This agent would look beyond information located in profiles when helping manage circles, and could collect information based upon actions performed by your contacts on social networks to help suggest how you might organize those contacts.

Google has been pretty mum on some of the many acquisitions that they’ve made in the past year, rumored at roughly 50 or so. I’m not sure why they decided to announce these particular acquisitions except for the fact that both have customers that they may no longer support in the future. Katango was providing an iPhone app that helped organize Facebook Friends. Apture’s technology was being used by a good number of websites and as a plugin for Chrome, Firefox, and Safari.

The technologies are pretty interesting, and I do suspect that we will see them integrated into offerings from Google fairly soon. I don’t know if the YouTube slider on Google Plus streams were from Apture, but they do seem to be a good match for the last of the Apture patent filings.

There’s a pretty interesting interview between Robert Scoble and Yoav Shoham on Cruchbase that’s worth watching after you spend some time with the patent, since Yoav Shoham refers to much of the technology behind what they do as “magic” and it’s a little fun to have a some sense of what the magic might be.

A Google Plus post from Yee Lee of Katango notes that today was going to be his first day of work at Google.