A few days ago, I asked the question, Is Google Aiming at Building Faster Networks and Data Transmissions? Google had acquired some interesting patent applications that have the potential to increase the speed and quality of data transmissions. An even more recent intellectual property acquisition by Google points to a growing interest in networking technology.

Google is planning on bringing ultra high speed broadband access to Kansas City, with fiber optic cable connections between homes that Google promised will deliver 1 gigabyte-per-second speeds, or a speed that’s “20,000 times faster than dial-up and more than 100 times faster than a typical broadband connection!.” That’s pretty fast. According to the Official Google Blog post, Google may be in talks with other cities to bring them this kind of high speed internet access as well.

The Google Fiber Blog hasn’t been updated too frequently, but may be something to watch. If Google is successful in Kansas City, it’s quite possible that they will be installing fiber elsewhere.

So the question I have is where Google got the experience, the expertise, the knowledge, and the ability to embark on a project like this? I’m sure that they are hiring people specifically for the project, even more interestingly, it looks like they’ve taken some steps to make sure that they have the intellectual property in place to back up the project.

On February 1, 2012, the United States Patent and Trademark Office recorded the assignment of 49 granted and 42 pending patent applications from Mosaid Technologies Inc., to Google, in a transaction executed on January 27, 2012. These patent filings appear to have originally belonged to Pirelli Cavi (the company’s name was changed to PGT Photonics S.P.A., The Pirelli Group, and now Prysmian), and cover a range of technologies related to fiber optic networks. 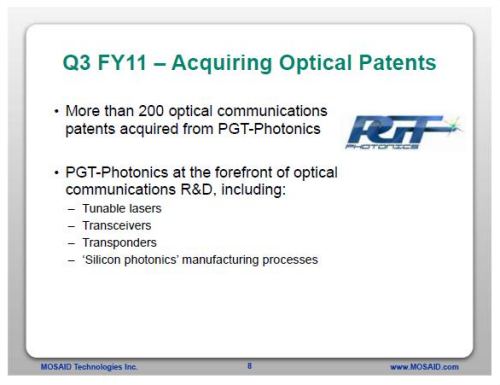 While Mosaid appears to have acquired more than 200 patent filings from Pirelli Cavi (PGT Photonics S.P.A.), the number of patent filings shown as assigned to Google in the assignment database at the USPTO total 91. Any patent filings that haven’t been published yet wouldn’t appear within that database, so there may be more involved as well. There are some very recently published pending patent applications and recently granted patents included in the transaction.

The terms of the acquisition aren’t included in the USPTO database, and I couldn’t locate a single report anywhere on the transaction to learn more.

Here are the patent filings involved: