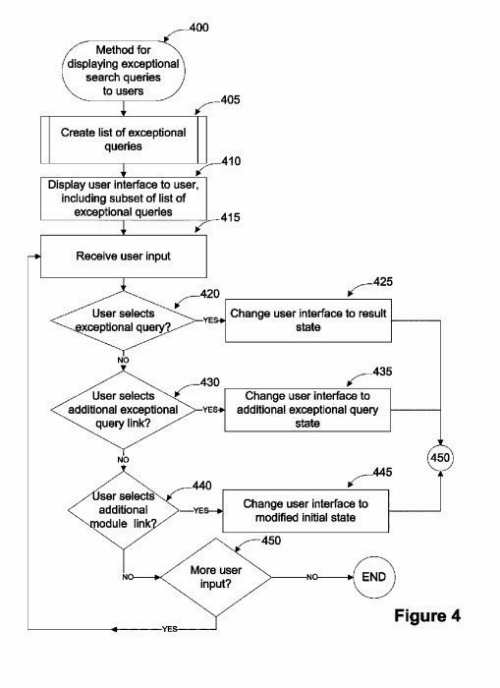 One of the interesting features at Twitter is the near real-time trending topics section which enables you to see hot topics that are the subject of tweets. Twitter allows you to see tweets about these topics on a worldwide scale, or nationwide, or even on a smaller regional scope. With Google Trends, you can see topics that are recently popular at the search engine as well. But many of those are popular topics over a period of hours or even days. What if instead, you could see hot topics in Google searches in much shorter periods, such as over the last 5, 10, 15, 20 minutes? What if you could see these trending searches on a nationwide basis or for much smaller regions? I’d love to see what realtime queries were taking place over the last half hour in my part of Virginia, for instance.

A Google patent granted this week explores the topic and describes such a realtime queries system.

The activity of a particular query can be based on the frequency of the search query’s reception over a given period of time, whether in relation to an expected frequency level or the rate of change of the frequency level. Additionally, the relevant periods of time over which activity is measured can be relatively short to maximize their relevance at a given instant.

When Google had access to Twitter’s firehose of data, until the deal between Google and Twitter ended, realtime Twitter results would show for a topic if you searched for it, and it was a great way to see very recent results for a topic. If Google starts showing near realtime “hot” queries, that could help fill a void that the missing Twitter data provided. If Google provided a hot query interface that didn’t rely upon searches for a particular subject, the list of queries displayed could act as a discovery vehicle that could show near realtime topics that you wouldn’t have to search for first to get news and information on suddenly popular topics.

The patent notes that there are a number of ways that this system could function, from focusing upon very popular recent topics, somewhat as Google Trends does now, to displaying instead query topics that see very high jumps in the frequency of searches over short periods of time. They refer to these queries as “exceptional” queries, and in the patent describe some of the technical processes behind uncovering these queries and some of the ways they might be displayed, including some user control over how they might be shown.

We are told that queries for these terms might be considered as an important signal in determining which might be trending queries, but the language of the patent leaves open other user signals as well in calculating what is hot.

The patent also provides some examples of the kinds of queries that might trigger an appearance as a trending query, such as a weather event or a special event or guest performer on a television show, or even searches for dining establishments during lunch or dinner time.

The patent also describes how such a system might especially benefit the users of mobile devices and handhelds by providing a list of hot topics so that users of those devices don’t have to do as much typing when they want to learn about real time occurrences happening around them.

While Google Trends is interesting, it’s not really something that I’m compelled to visit on a regular basis, but being able to see near realtime queries for hot topics near where I live is something I would pay a lot more attention to than the information shown by Google Trends.

If Google launched this near realtime queries service, would you use it?

An approach like this provides the ability to monitor activities on the Web in and the world in near real time, transforming Google from just a repository of information to a source of very new and recent information. One of the issues behind the approach is whether or not Google can capture relevant search results quickly enough so that when they display many of these trending queries, they show relevant results related to why the queries are hot topics.

For instance, if lots of people in an area suddenly start searching for information about a very recent nearby tornado, and Google identifies that as a trending query, will Google be able to show results about that tornado? Will they be able to index and display that content quickly enough to satisfy searchers? The trending topics approach on Twitter only has to show the Tweets that make those topics hot. This approach from Google not only requires that Google do a great job of monitoring realtime queries but also of indexing content related to those queries.