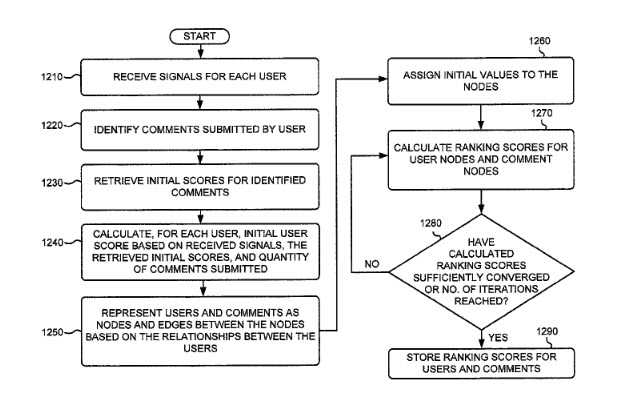 A rumor surfaced last week that Google would launch a third party commenting platform to rival Facebook’s. Coincidentally, Google was granted two patents this week describing comment systems, and how ranking comment scores that can affect web page rankings. But the patents appear to describe comments on two different services from Google that have been discontinued. One of the patents appears to involve Google Sidewiki, which had more of a Web annotation service feel than that of a commenting system, and the other involves comments on Google Knol.

Google Sidewiki enabled people to leave a comment on virtually any page on the Web and could be accessed through the Google toolbar. A 1999 survey of Web annotation services showed that they have been around since the earliest days of the Web, and they differ from commenting systems in that they’ve been aimed at providing ways for people to leave private or public notes about web pages, sometimes but not necessarily with the participation of the authors of those pages. When Google announced that they were closing down Sidewiki last September, they told us that:

Over the past few years, we’ve seen extraordinary innovation in terms of making the web collaborative. So we’ve decided to discontinue Sidewiki and focus instead on our broader social initiatives.

Google Knol originally appeared to be Google’s response to Wikipedia, except instead of a knowledge base created by the wisdom of crowds, it was instead intended to be a source of information where individuals could write about topics that they had some expertise upon, and provide the kinds of things that Wikipedia appears to disdain, such as original opinions and research, and the expertise of individual authors. It provided a way for users of Google Knol to rate and comment upon entries from authors, and a way for people to rate comments as well.

The patent involving comments on Google Knol explicitly mentions the service in its description. The other patent doesn’t mention Sidewiki but describes fairly well how it worked, and one of the inventors listed on the patent mentioned his involvement in the project when it was launched.

Can the two patents provide us with some hints about the commenting system that might be released by Google sometime shortly, and how Google might treat those comments? Both focus upon rankings and reputation scores for people who leave comments, and for the comments they write. Given Google’s inclusion of author profiles in Web search results, and towards showing content shared and endorsed by social connections in Search Plus Your World results, the reputations of people leaving comments on a new Google commenting system may play a role in how web pages might be ranked in the future in both Google’s Web search and social search.

The Sidewiki patent is:

Ranking authors and their content in the same framework
Invented by Michal Cierniak and Na Tang
Assigned to Google Inc.
US Patent 8,150,860
Granted April 3, 2012
Filed August 12, 2009

The Google Knol patent is:

Google may offer a third-party comment system because Facebook has one. They might also be providing a service like this as a tie into Google Plus, and promote that social network, by providing a way for people to display their comments not only on the pages where the comments were originally left but also on their Google Plus posts pages.

Google may also be introducing such a service to find a way to start associating comments with the authors who created them. The benefits of doing that include:

Under an Agent Rank or Author Rank approach, different types of content could be given reputation scores, including; web pages, blog posts, articles, forum posts, comments, reviews, questions and answers, micro-blog posts, and status updates, and even advertisements.

And the page that includes content from multiple authors (including commenters) might be given a score based upon the reputation scores of all authors.

User and Comment Scoring Under Sidewiki, Knol, and Confucius

Both patents provide some ideas about how comments and their authors might be ranked. For example, in the Google Knol patent, we see this passage:

Also, a reputation may be a factor dependent on the amount of time that a user has been in a system and the level of activity of the user within the system. For instance, a user whose contributions average a rating of 3.0 from other users but who has made hundreds of contributions over many years, may have a substantially higher reputation score than does a user with an average of 3.0 from a handful of readers on a single submitted article.

In the Sidewiki patent, a user’s reputation score might be initially based upon things such as how long they’ve been a user of the commenting system, what their age is (users in a certain age range may provide better comments than users with ages outside of the age range), and the educational background of the user (users with high levels of education may provide better comments than users with lower levels of education).

A rank calculation component of this system may combine the user scores and the comment scores to come up with a quality score for comments. As we’re told in the patent:

The Sidewiki patent doesn’t tell us what they might do with the reputation and ranking scores that they might calculate other than possibly showing a public user ranking leader board.

The Knol patent provides many more details on how reputation scores might be calculated and might use those when people search for content on Google Knol (and possibly on Google Web search as well).

Google Knol included an authentication process that people could follow to show that they are who they say they are. It provides for different reputation scores on different topics and separate reputation scores as contributors on topics as opposed to reviewers or commenters.

This section of the patent stood out for me:

Such reputation indicators may then, in turn, be used to score web pages in search results (e.g., if a highly-ranked author gives a high score to a page, its search position will rise), along with other traditional factors such as PAGERANK scores, click-through rates, the ratio of good scores, and spam scores. In some implementations, the author’s reputation score can be influenced by the web page score attributed to web pages where the author’s online content is published, which web page score can be determined using traditional factors as discussed above or by other techniques.

Under a ranking system for content and comments that were originally developed for Google’s Confucius Q&A sites, we’re given many more signals that might go into scoring for content and comments as well. I’ve described the “credential scores” that might be generated for that system in the post, How Google Might Rank User Generated Web Content in Google + and Other Social Networks.

It’s possible that scoring could be used with Google Plus and other social network sites, as well as blog posts and possibly comments on those posts that might be made through a comment system from Google.

At this point, we don’t know if Google will be introducing a third-party commenting system for certain. But it seems like something that they will probably do.

I’m not fond of third party commenting systems, and I wouldn’t use one if it meant that the comments from my past posts would disappear. I wouldn’t mind adding a comment system that co-existed with my present WordPress commenting system here and allowed commenters the option of leaving a comment that included an authorship badge that could be tied to their Google Account.

Would you use a commenting system that might cause how your pages are ranked by the search engines to be influenced by the reputations of commenters?