Google’s Project Glass seems to be moving closer and closer to reality, with the granting of 7 more patents today. Last week, I pointed out 4 patents related to the project in Google Glasses Design Patents and Other Wearables. Of those, 3 were design patents filed to protect the look and feel of the glasses, and the fourth patent described a way of using an infrared (IR) reflective surface on rings or gloves or even fingernails to provide input for the eyeglass display device. The patents granted today include only 1 design patent, and 6 patents that describe some of the more technical details about how Google’s Heads Up Display might work.

The First patent is a design patent from inventors who worked on the three design patents granted last week, Matthew Wyatt Martin and Maj Isabelle Olsson (Mitchell Joseph Heinrich was a co-inventor of one of the earlier three). 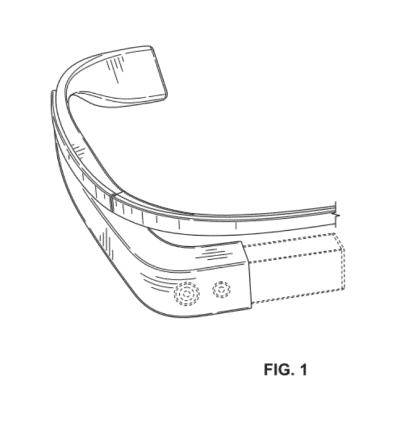 Some of the comments that I’ve seen from people about Google Glasses is the concern that people might walk into the side of a building or in front of a bus while watching a virtual world through Google Glasses. This first patent describes how a pair of glasses like these might instead act to augment and improve our perception of the real world around us by telling us about sounds, the direction they are coming from, and the intensity of those sounds. We’re told that this application might also help people who might have difficulty hearing, or be hearing impaired.

Someone attempting to cross a street might not be aware of an approaching car honking to warn that pedestrian. The glasses could indicate the direction the honks are coming from, and how intense they might be to “indicate how close the oncoming car is to the user.”

Example methods and systems for displaying one or more indications that indicate (i) the direction of a source of sound and (ii) the intensity level of the sound are disclosed. A method may involve receiving audio data corresponding to sound detected by a wearable computing system.

There are a number of different types of sensors that might be used with a pair of glasses, and those might be part of a nose bridge, primarily because it’s part of the glasses that are forward facing (as opposed to the sidearms of the glasses. Some of the different types of sensors could include a video camera, a sonar sensor, an ultrasonic, and possibly a microphone that might monitor patterns associated with breathing.

A sensor between two sides of a nose bridge might also recognize the appearance of a nose between them, and turn on the glasses when that happens.

The patent mentions the possibility of finger-operable touch pad input devices on the sidearms of the glasses. As for the display, it could be:

…a transparent or semi-transparent matrix display, such as an electroluminescent display or a liquid crystal display, one or more waveguides for delivering an image to the user’s eyes, or other optical elements capable of delivering an in focus near-to-eye image to the user. A corresponding display driver may be disposed within the frame elements 104 and 106 for driving such a matrix display. Alternatively or additionally, a laser or LED source and scanning system could be used to draw a raster display directly onto the retina of one or more of the user’s eyes.

When we’re looking forward and we have a wide field of vision in front of us, our actual gaze might be directed towards something specifically within that field of vision. The glasses might track where we are actually looking to prioritize what is within that visual area. Head movements, such as turning our heads to the right or left, might also inform the glasses of a change of visual attention, and audio samples of ambient audio miught also trigger an application that might be based upon direction of attention.

We’re told that this might be used with a number of different applications, but not given any examples of what those might be.

The present disclosure describes systems and methods for transmitting, receiving, and displaying data. The systems and methods may be directed to providing a constant or substantially constant data transmission rate (e.g., frame rate per second) to a device and controlling bandwidth by presenting information directed to an area of interest to a user.

Bandwidth can be lowered, for example by presenting high resolution data directed to the area of interest to the user (e.g., an area to which the user is looking or “gazing” using a heads-up display), and lower resolution data directed to other areas. Data can be transmitted and received at a constant frame rate or substantially constant frame rate, and gaze direction and progressive compression/decompression techniques can be used to transmit data focused on areas directed to an area of interest to the user.

An accelerometer system, including a gyroscope and/or a compass built into the glasses might be able to understand the kinds of activities that a wearer is engaged in, such as “sitting, walking, running, traveling upstairs, and traveling downstairs.” The user interface shown to someone might vary based upon their activity.

Someone standing still might be more likely to find a data intensive display more useful than someone walking. Someone running might want an interface that may also include some statistics about their run.

Method and system for selecting a user interface for a wearable computing device
Invented by Gabriel Taubman
Assigned to Google
US Patent 8,184,070
Granted May 22, 2012
Filed: July 6, 2011

This last patent focuses primarily upon data transmission and reception of a wearable computing device, as well as how different body movements, audio commands, viewed gestures, and even touch commands might be used to send and receive data.

These patents don’t contain all the answers about how Google’s Project Glass might work, but they provide a number of interesting possibilities and alternatives. I’m somewhat surprised at the attention to details, like tracking the actual gaze of someone looking through the lenses of these devices instead of just tracking where they are pointed. Or enhancing someone’s ability to understand where sounds are coming from around them, as well as the intensity of those sounds.

23 thoughts on “More Google Glasses Patents: Beyond the Design”