A Google patent application that came out last week showed a different variation of a recommendation bar, and a screenshot from the patent filing shows what could have been, or might be sometime in the future. Here’s a glimpse: 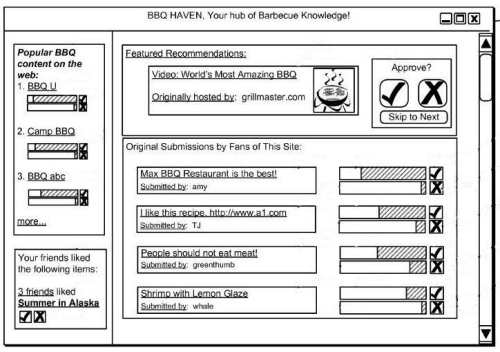 In addition to providing recommendations, the interface from this patent filing will also let you vote up and vote down content from the site and from other sites as well. The patent filing is:

We’re told in the patent filing that the kinds of content that could be used with such a recommendation system could include a wide range of content types including blog posts, images, music files, articles, news items, advertisements for items on sale, from sources such as websites, blogs, online discussion boards, gaming communities, market place type sites, and other forums.

The voting/recommendation interface is something that a site owner could possibly insert via some java script code, though the patent filing provides a lot of different possible implementations for providing this kind of crowdsourced recommendation system. It also provides a lot of variations in how it could potentially be set up, such as allowing for votes to be anonymized in some cases, or show who voted for what in others.

Is this Google’s answer to the demise of Digg?

16 thoughts on “Google to Crowdsource Recommendations?”