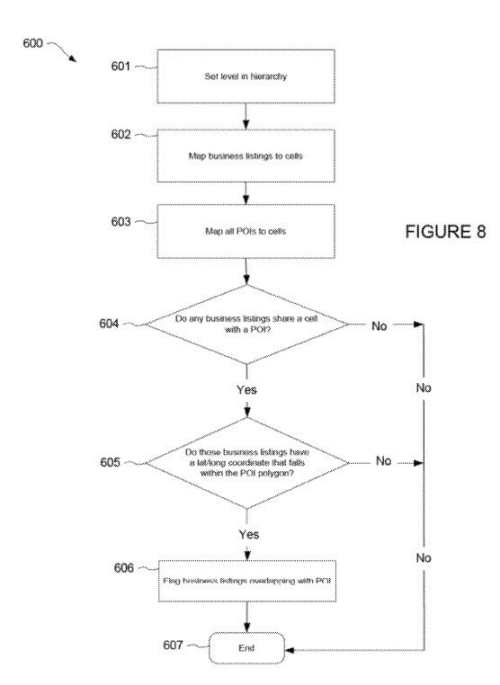 As these cells decrease in size, they increase in numbers, which has the impact of increasing the zoom level and the accuracy of areas represented in such an index. Might work well in a place like China, where latitude and longitude are banned for export as munitions. Such a set of cells might be part of a geospatial analyzing module that links specific businesses and points of interest (parks, public regions, landmarks, etc.) to specific places on this model or index of the earth. That might be one index of the businesses and one index for the points of interest, or a combined database that includes both.

A patent granted to Google this past Christmas day explores an approach to finding erroneous business listings using the kind of cell, or grid, system that I mentioned above. As it tells us:

For example, a pizzeria may be overlaid on the same address as a famous landmark or point of interest like the Empire State Building or the Golden Gate Bridge.

This may be due to a data entry error, but it is frequently due to a deliberate attempt by advertisers to promote their business by using the same address as a famous landmark or point of interest.

If a business is listed within the same cell as a point of interest, it might be flagged for review to make certain that it truly is at that address, or if it is within a certain radius of a point of interest. This might be an indication of “erroneous geospatial data.” While Google doesn’t necessarily have enough feet on the street to check the exact location of every business or point of interest in the world, as this patent filing notes, listings that might try to take advantage of locations that might be shared with famous landmarks seem to be a place they might scrutinize more fully than a business that might not have such fortuitous locations.

The erroneous business listings patent is:

A system and method is provided that detects a business listing having erroneous geospatial data. In one aspect, it is determined whether a first location and a second location are at least partially situated within a cell, the cell representing a geographic region having a predetermined area.

Interestingly, we are starting to see more patents covering the correction of data and locations in Google Maps recently, especially with the lack of accuracy that plagued Apple Maps when it was released with the iPhone 5. The last Google patent I wrote about in, Google Tackles Geographic (Map) Spam for Businesses, covered data in citations describing a particular business that might not fit quite right, such as an entry of something like “best texas plumber” in a telephone filed for a business. Or textual information in such citations that wasn’t a good match for the text used in a “trusted” description of the business.

I’ve also written how Google might try to use a crowdsourcing approach to correct map edits by users of Google Maps in the post GPS to Correct Google Maps and Driving Directions as a Local Search Ranking Factor?. If you report that a business listed in Google Maps is closed from the location of that business, as indicated by GPS or cellphone triangulation, or by identification of a Wireless hotspot, that report might be trusted more than a report from a different location. Google might then find people who know you via a social network, and even people who don’t, to try to collaborate the status of that business.

Google may also use their Crowdsensus Algorithm, which I described in Are You Trusted by Google?, as a reputation system that may be used to determine how much to trust people who make edits to Google Maps.

The patent attempting to determine whether or not businesses located within the same cells as public regions or points of interest, or within a certain radius from those, don’t tell us exactly how the search engine might attempt to manually check upon such a location. Chances are they would try to use a combination of an approach that scaled well, and wouldn’t necessarily require them to be everywhere.

And Google has gone through the steps of driving street view cars in many places that they map. They also have a photographer for businesses program, in which “trusted” photographers take pictures of the insides of businesses that people can now click upon in search results.

It’s interesting seeing the approaches that Google is trying to take when mapping the real world, with businesses and points of interest at actual locations that can’t move the way that Web pages can. Checking up on the locations of businesses that potentially might benefit by being near well-known landmarks and points of interest makes a lot of sense as one starting point to verify that data.

Have a Happy New Year, everyone!