When you search at Google, in addition to search results, Google often returns a set of search suggestions that might be related to your query. Last month, I wrote about how some of those suggested query refinements might be created follow a method invented in part by Ori Allon, in the post How Google is Generating Query Refinements the Orion Way. But that’s probably not the only source of search suggestions. A Google patent granted this week looks at how Google could grab additional refinements from very recent sources.

For example, the following search for “North Korea” shows a couple of very recent earthquake listings: 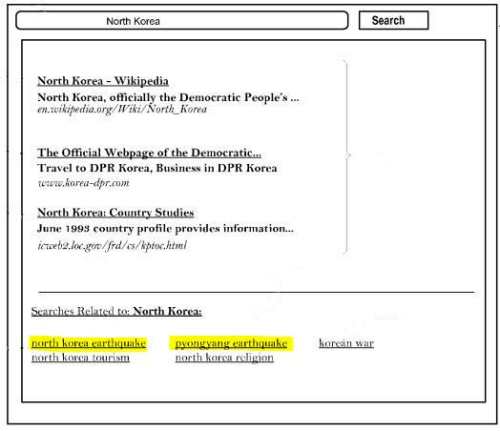 Such suggestions aren’t just relevant to the query itself, but also relevent to news-type results that match the query as well. Those news-type results would be within a recent period of time, such as in the las week, or day, or even within a number of hours or minutes.

In addition to looking at how “new” those results might be, user-behavior such as click-through rates on search results responsive to queries might also be considered.

The patent does provide more details on how these fresh search suggestions might be ranked and chosen.

Methods, systems, apparatus, including computer program products, for providing fresh related search suggestions in response to a user submitted query are presented. In one implementation, a plurality of prior queries are selected wherein each of the prior queries was submitted as a search query a number of times during a recent time period and satisfies a criterion.

A couple of years ago, Google was showing realtime search results, with an search interface addition that showed results from Twitter’s data hose, and some additional results. When Google Plus was released, realtime search was suspended, with Google promising that it would return once it was integrated with Google Plus. What went unsaid in that initial announcement from Google was that their deal with Twitter to use a data stream of tweets had expired.

I’ve tried a few searches that would probably have recent search suggestions if this approach from the patent was presently being used, and those searches didn’t return any recent suggestions.

I suspect that Google will bring back realtime results at some point, but the format might not be the realtime results Google displayed in the past, and may not even include the kind of “fresh” search suggestions described in this patent.

Then again, I’ve been waiting for realtime results for almost 2 years now.

I’m wondering if people are much less likely to use Google Plus like they have with Twitter, providing updates that focus upon recent events.