I’ve written about Google Bombs in the past, and how a bio page featuring President George Bush ranked highly on a search for “Miserable Failure” as a result of a Google Bomb, in a post from 2011 titled How a Search Engine Might Fight Googlebombing.

In a post from earlier today, Nemek Nowaczyk wrote Google Bombing the Knowledge Graph: Whos a Liar? He noticed that on a search for “liar” (in Polish), Poland’s Prime Minister Donald Tusk appears in the knowledge graph results for the search. Nemek sent me an email with a link to his post. Within seconds, I was typing one of the better known English language Google bomb phrases into a Google search, with a guess as to what I would see there. 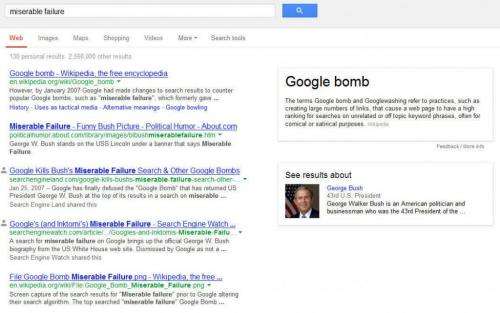 Ok, so the top knowledge graph result on a search for “miserable failure” wasn’t George Bush. But a smiling George Bush was close enough to be a “see results about” disambiguation knowledge panel result.

For more about Google knowledge panels, see my recent post on How Google Decides What to Know in Knowledge Graph Results.