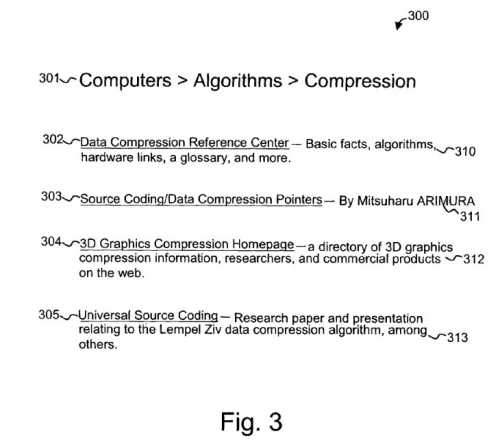 There’s also a part of this approach that recognizes that many pages have more than one link to them, so a choice would need to be made as to the best “snippet” to show.

The anchor text and text surrounding it is called a “web quote” in this version of the Anchor Text Snippets patent. The patent refers to an earlier version of the patent (a provisional version) that doesn’t use the term “Web Quote” to refer to the text associated with anchor text. In that earlier version, U.S. Provisional Application No. 60/363,559, filed Mar. 13, 2002, there’s an alternative description of that kind of text:

In one technique for improving the quality of a document index, additional terms found near hyperlinks in documents are used to enhance the description of the linked document. The premise of this technique is that web authors tend to described or comment about the content of other web pages in the descriptive text located near the link to the other page. This descriptive text may be used to enhance the quality of the index.

That earlier version of the Anchor Text Snippets patent tells us that using such text might help in the creation of a more comprehensive document index. It also tells us that this kind of associated text often accurately summarized the linked web page being pointed towards.

The older version of the Anchor Text Snippets patent doesn’t use the term “web quote”, but the idea that this text near a link to a page being potentially very useful in creating a description of a page is the same in both.

During audits for websites, one recommendation that I frequently make a recommendation for is for clients to review and rewrite meta descriptions for pages. If they are well written, contain the query terms used to find a page, and are good fits for the page, a search engine might use them as a snippet to describe that page. If they are engaging and persuasive, they might influence people to click through from search results to the pages they describe. I’ve written a few posts in the past year about when Google might also decide to use content from pages as snippets:

None of those even begin to hint at the possible use of anchor text and text associated with or surrounding it, as possible snippets for those pages.

In some cases, neither meta descriptions nor content from the pages provided the best choices as snippets for a page in Google’s search results. Would Google instead use anchor text (and text that might be associated with that text, pointed to the page from another page, as a description of a document in a snippet? In 2002 – 2003 when this patent was being developed, it sounds like an idea worth exploring. If there’s any chance that the use of anchor text might be a good choice, that would explain why Google wouldn’t just abandon the idea, and abandon the patent. Then again, Google’s patent for the Google Directory was granted almost two years after Google sun-setted the Google Directory.

One aspect of this Anchor Text Snippets patent that I find interesting is collecting “Web Quotes” as possible snippets based upon both anchor text and text surrounding it that might be within the same paragraph, and follow some other rules that might indicate that it might be a good choice for a snippet. There might be multiple choices of “Web Quotes” to use as a snippet for a page since a page can have a lot of links pointing to it from across the Web. These Web Quotes might be ranked base upon a “quality metric associated with the web quotes of the examined documents.”

The Anchor Text Snippets patent includes many search engineers who have been with Google from some of the earliest days, and a number of those are still with Google. (I think there’s a typo in the patent, and the last name should be Georges R. Harik, who was instrumental in launching Google Adsense and Adwords, and worked on projects such as “Gmail, Google Talk, Google Video, Picasa, Orkut, Google Groups and Google Mobile.” Here’s the patent:

Web quotes are gathered from web pages that link to a web page of interest. The web quote may include text from the paragraphs that contain the hypertext links to the page of interest as well as text from other portions of the linked web page, such as text from a nearby header. The obtained web quotes may be ranked based on quality or relevance and may then be incorporated into a search engine’s document index or summary information returned to users in response to a search query.

What to look at in the Anchor Text Snippets patent

I don’t think that Google will decide to start using anchor text and text associated with it as snippets for search results in the future. The three links I listed above all describe some of the factors that Google might look for within the content of a page to decide what to show as a snippet for that page.

But if you enjoy alternative histories and science fiction like Phillip K. Dick’s The Man in the High Castle, which describes an America in the 1960s after Germany and Japan won World War Two, and was occupied by both those countries, you might get that feeling of being in a left-handed universe while reading through the patent. There are some descriptions of how a search engine works back then, and how this approach to snippets might improve upon the experience.

Could Web Quotes ever be used by Google to provide an alternative snippet for pages, based upon links to the page instead of content that appears on the page itself?

I’m going to experiment a little with the idea, and try to create hypertext links to pages about things like Google using alternative titles and snippets in some cases, from sources that might be like this paragraph on a page that links to other pages on my site.

The patent does tell us that it might filter Web Quotes using a quote generator that might look for certain features in those Web Quotes. Here are the features listed in the patent:

Does that last one mean that it’s more likely that a Web Quote with a link pointed to a page is more likely to be a snippet for that page if it’s on the front page of the New York Times that if it were on the front page of my local paper’s website (The Fauquier Times)? Maybe. The patent does tell us that how relevant a Web Quote is to the search terms used by a stronger consideration than a quality value like PageRank.

I will be keeping an eye out for the use of web quotes – anchor text plus text associated with that anchor text – as snippets in search results. If you see any being used by Google, please let me know. 🙂