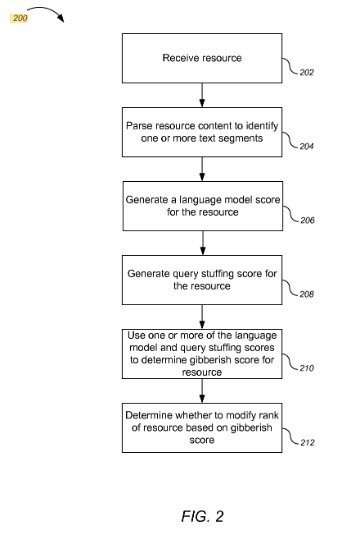 The patent tells us that spammers might generate revenue from the traffic to gibberish content web pages by including:

It also tells us that since those pages were created “using high-value keywords without context, the web page typically does not provide any useful information to a user.”

These gibberish content scores might be created for each page based upon multiple queries that are contained on those pages.

The pages may be ranked initially by information retrieval relevance scores and importance scores such as PageRank.

Pages may then be re-ranked or demoted based upon a statistical review where content on those pages is broken down into different n-grams, such as 5 word long n-grams that would break the content of a page into consecutive groupings of the words found on a page, and create statistics about those groupings and compare them to other n-gram groupings on other pages on the Web. An example n-gram analysis of a well-known phrase using 5 words:

The statistical patterns found in a language model can be used to identify languages, to apply machine translation, and to do optical character recognition.