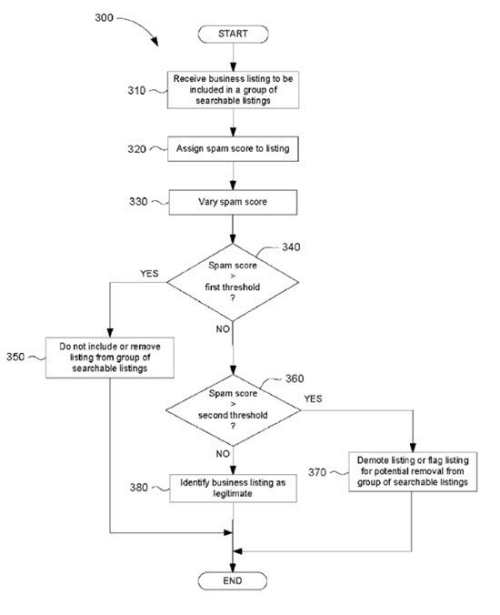 Google has filed and been granted a number of patents in a category I’ve called Web Spam.

I like finding those, reading about them, and making sure that they don’t inadvertently target sites that they shouldn’t. A false positive, or a site mistakenly positively identified as spamming a search engine, may mean more than just a site getting demoted in rankings.

It could mean that sites might just disappear from rankings completely.

One patent, filed a couple of years back, took sites that Google was suspicious of using spam to improve rankings and instead of increasing their ranks, decreased their rankings, or kept them the same, or let rankings fluctuate randomly. That patent wasn’t limited to just local search like this newer one.

It focused on providing an incorrect ranking intended to get a spammer to reverse changes they may have made to a site, or roll some of them back.

If the changes were reversed by (possibly the same person), Google might decide that the changes were done by a spammer, especially if new changes were even more spammy (unnatural links, keyword stuffing, etc.). I titled my post about that patent, The Google Rank-Modifying Spammers Patent.

The post and patent inspired a few discussions and a few questions to the Google Spam fighting team. Matt Cutts released a video sometime after, warning people that, “Just because we have a patent on something doesn’t mean we are currently using it.

Google local search business listings provide data identifying a business and its location both in the world and on the web. It targets helping people find businesses of certain types, close to specific locations. People do create bogus listings, attached to very real phone numbers to generate business leads. Often many of such businesses don’t necessarily even need nearby offices to conduct the kind of business that they perform. As the patent warns us:

The customer may be defrauded by contacting or visiting an entity believed to be at a particular location only to learn that the business is actually operating from a completely different location. Such fraudulent marketing tactics are commonly referred to as “fake business spam”.

We’re next told that search engines try to identify such business spammers, who sometimes experiment with search listing submissions to see if they can manipulate search results. They might do this by generating a spam score for business listings based upon a number of factors and then adding some random numbers to that score so that it isn’t easy for spammers to reverse engineer those scores. This seems to be an inspiration for making such changes:

The amount of noise that is added is sufficient to affect spammer’s attempts to reverse engineer spam-identification algorithms, but small enough so that the search experience of end users is minimally affected because the ranking of legitimate listings is unaffected.

The addition of the noise to the spam scores prevents potential spammers from reverse engineering the spam detecting algorithm such that more listings that are submitted to the search entity may be identified as fraudulent and not included in the group of searchable listings.

The patent lists some of the things it looks at in generating an initial business spam score, such as:

The patent does provide more details on the process behind how Google might use a business spam score and how random amounts of noise might be added. If you’re interested, I’d suggest digging into the patent a bit more.