We present a technique that exploits the duality between sets of patterns and relations to grow the target relation starting from a small sample. To test our technique we use it to extract a relation of (author, title) pairs from the World Wide Web.

One of the early successes of Google’s search is how PageRank influenced the ordering of search results in response to queries. Google Founder Lawrence Page is credited with the invention of PageRank, but around the same time, Sergey Brin was digging into another approach for capturing and indexing content on the Web involving entities and knowledge.

The paper quoted at the start of this post contains substantially the same text as a provisional patent Brin filed with the USPTO in the year 2000, but he ended up rewriting it and then filing 4 continuation patents of it up until 2012 when he filed the latest version of Information extraction from a database. The abstract from the versions of the patent reads: 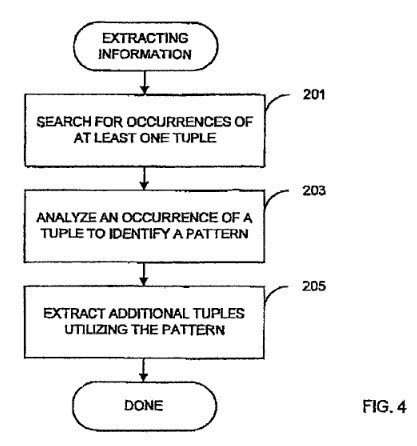 The Transfiguration of Search @Google

Signs are there that this is the direction that search and SEO are headed in, where the Semantic Web plays a larger and larger role. I’ve been writing for years about topics such as Google’s acquisition of Meta-Web and Freebase, and more recently about how Google might use the Web as a database to identify and disambiguate different entities with the same names, in Finding Entities: A Tale of Two Michael Jacksons.

Google is going to be changing how they collect and distribute information on the Web in many ways. Think of it as an evolution, though. I’m not saying that SEO is dead, but I am saying that Sergey Brin’s vision of how information from the Web is extracted, in tuples that indicate relationships, might become more commonplace as Google gets better at it.

And Google has been getting better at it,.

Last Monday, I asked the question which name do you prefer, Semantic Search or Semantic SEO?, while sharing links to tutorial presentations on Semantic SEO that both Barbara Starr and I had put together as an introduction to the topic after Barbara asked me if I would be interested in joining her on the presentation.

I’m glad I did – it gave me a chance to hear from a lot of other people working on the Semantic Web, including search engineers and people offering services and tools in the field. It gave me a chance to hear Barbara’s thoughts (highly recommended). There were a lot of people from the search engines, and they were saying some interesting things. And there were a few signs of things to come at the 10th anniversary of the Semantic Technology and Business Conference.

If Google went from being a search engine tomorrow to a knowledge engine, would it surprise you?

We know how difficult it can be for a search engine to identify entities on the Web and recognize different entities that share a name, even in the absence of markup such as schema on pages. Another challenge that faces a search engine or knowledge base is in defining an entity by assigning it an entity “type”.

An entity type assigned to an entity can tell us about the attributes or properties, and the values associated with them, that help us learn more about them. For example, for an actor, you might want to collect information about roles and characters played in Movies and on TV and Stage. You might want to collect additional features, such as other actors involved in a production with them, where it was performed, and what type of medium it was performed in. Who were the people they started with? What awards might they have won?

Entity assignments also indicate other information, such as when an entity type is being a “spouse,” we automatically understand that there is another entity related to it – the person they are a spouse of. If an entity is an author, there are related entities that are books or articles or blog posts or screenplays.

Information extraction may be used to automatically identify and extract information in the form of facts and can be performed on a variety of sources such as web pages to extract factual data.

While this patent isn’t new, it’s important in its description of how Google collects information about entities it finds on the Web and tries to understand then. The growth of a collection of facts about entities into a knowledge base requires that those objects and facts be defined consistently.

I blogged about this patent because it felt like the time that I did after my “Two Michael Jackson’s post.” I also wanted you to see the words “information extraction” about entities on the Web, as opposed to the “crawling” of Web pages since that’s part of the evolution of SEO.

Sometimes entity type information might be unavailable on pages. Don’t let this happen to you and your pages.

Sometimes an entity might share a name with another entity, such as when the musician Peter Gabriel named his first four albums “Peter Gabriel.”

If you are going to name your first four collections of music after yourself, people might be a little ambiguous regarding which one they might be writing about when they are.

Listeners might be confused, as well as readers, as well as search engines that may be trying to convert information on web pages into “Knowledge.”

Some Facts about Entities, Entity Type Assignments and their Fact Repositories

A repository includes facts, and each fact includes a unique identifier for that fact, such as a fact ID. The “object” that a fact has may be given a unique Object ID as well.

A fact about an entity includes at least an attribute and a value. For example, a fact associated with an object representing George Washington may include an attribute of “date of birth” and a value of “February 22, 1732.”

The number of facts associated with an object may be unlimited – there could be hundreds.

Values associated with Facts, such as a fact about the Economy of China, could contain a lot of information.

In addition to facts about specific objects/or entities, the fact repository may contain facts about the representation of the fact on the Web itself such as:

This entity type assignment engine attempts to improve the quality of knowledge contained within the fact repository by assigning entity types to objects with unknown entity types.

Entity models may be built for entities once, but are usually rebuilt over some time.

Some entity types are binary, as in an entity is of a certain type, or it is not. Fido might be a dog, but the alternative as a binary entity type is a “non-dog.” A multiclass entity is also possible, and a person might be two different entity types at the same time, such as Arnold Schwarzenegger being a business person and an actor simultaneously.

The patent describes these assignments of entity types as either unsupervised or semi-supervised approaches. If the facts used to assign an entity type are weak or conflict in some way, an assignment might not be made.

This patent is a couple of years old, and while it describes an automated way to assign an entity type, there are methods from places such as Schema.org where site owners could use markup to assign entity types, or places such as freebase.com where a person could assign one.

Or approaches such as the Open Language Extraction developed by Wavii or other extraction approaches may get involved.