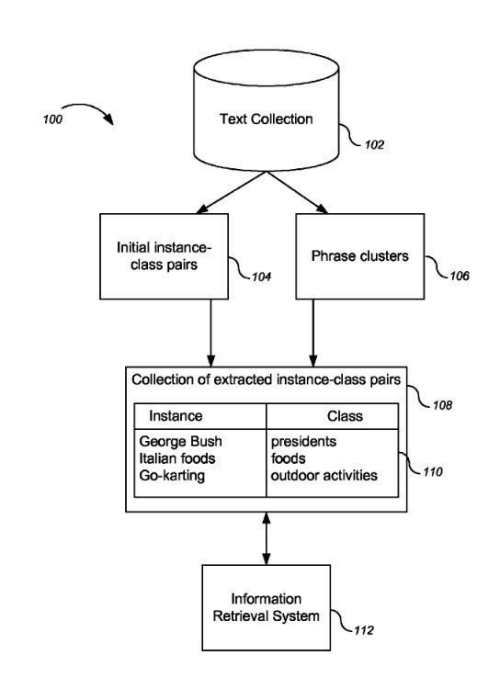 In creating a knowledge base, there seem to be several approaches that can be used to supply entities and facts from sources like web pages and query logs.

A Microsoft paper from 2009, Named Entity Recognition in Query, tells of a manual analysis they performed of 1,000 queries, and told us that 70% of those queries contained named entities.

So entities do appear in queries, and Google receives a lot of queries a day (as does Microsoft and Yahoo).

A patent from Google granted last year from the same authors as the patent on extracting entities and data about them in queries, Marius Pasca and Benjamin Van Durme, describes how Google might be mining text for semantic classes and instances of objects (entities) from the text. When the patent says text, they mean (in this instance) of collections of web pages and query logs.

The patent uses the language “classes” and “instances”, and it’s important knowing what it means by those words. A class is a type of property value for objects, such as “presidents” or “stamps” or “cities”. An instance is either a one time example of an entity from one of those classes such as “George Washington,” or the “Inverted Jenny” stamp or “Princeton”, or a subclass of class, so lions are a subclass of animals.

This patent describes ways to extract semantic classes and corresponding instances from a collection of text.

It could start finding semantic classes by:

These features described on the patent might be optional steps:

I was happy to see “thresholds” referred to here, and those are the minimum number of “instances paired with the class” to be found within the cluster for it to be considered an instance worth keeping.

So, if “George Washington” isn’t associated with the class “President” enough times and doesn’t meet that threshold, it might not be seen as worth keeping.

The semantic classes patent is:

Methods, systems, and apparatus, including computer programs encoded on a computer storage medium, for extracting semantic classes and corresponding instances from a collection of text.

One aspect of the subject matter described in this specification can be embodied in methods that include the actions of: 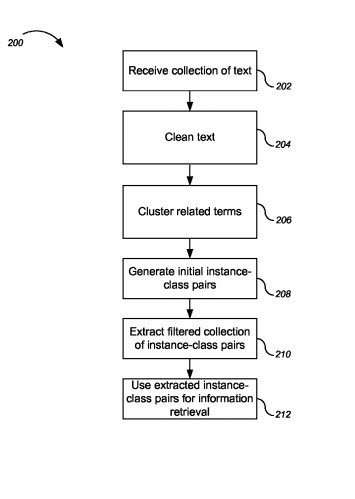 Why would Google do this?

Here’s the answer from the patent in short:

If Google Maps is an example of a knowledge base that can be used to answer queries related to businesses at different locations, such as [gas stations in Princeton, New Jersey] this system might include identifying from Web pages and query logs, instances of the class of gas stations in Princeton. When it extracts those, it might then cluster them, much like the way it might cluster information found about different businesses as described in Google’s patent Method and system for clustering data points . Here’s a snippet of the abstract from that:

The text collection that might be used could number in the millions of English language Web Documents. (I would suspect that other languages could be used as well.)

An example of an extracted instance-class pair from the patent is “‘George Bush’ as an instance corresponding to the class ‘presidents'”.

We are told that a particular instance can belong to more than one class. So, a person like Ronald Reagan might be a President, an actor, a screen guild president, a businessman, a married man, a father, and even others.

Additionally, each class can include multiple instances such that several instance-class pairs are having the same class but different instances. The class “Person” would possibly be filled with many instances in over a million web pages.

This process might start out by cleaning up web pages, by doing things such as:

Parts of speech can be tagged using statistical methods trained over a collection of text.

The patent provides a document presenting an example of speech tagging, in “TnT–A Statistical Part of Speech Tagger.

Part of speech tags are helpful when searching for particular patterns, like SuchAs-style patterns.

This could be done by looking at matches for phrases and the context of those in prefixes and postfixes, or a specified number of words to the left and the right of a phrase in a sentence:

Each context becomes an entry in a vector associated with the phrase. The vector captures how the phrase appears in text, along with the associated frequencies of the phrases occurring. The system clusters the phrases based on their vectors to generate clusters of distributionally similar phrases.

The post I wrote yesterday provides several other linguistic patterns that could involve extracting objects and attributes about them. Those could similarly be clustered to see if there were enough of them.

The patent provides an example query that this process can help answer with, “what are the top US Presidents?”