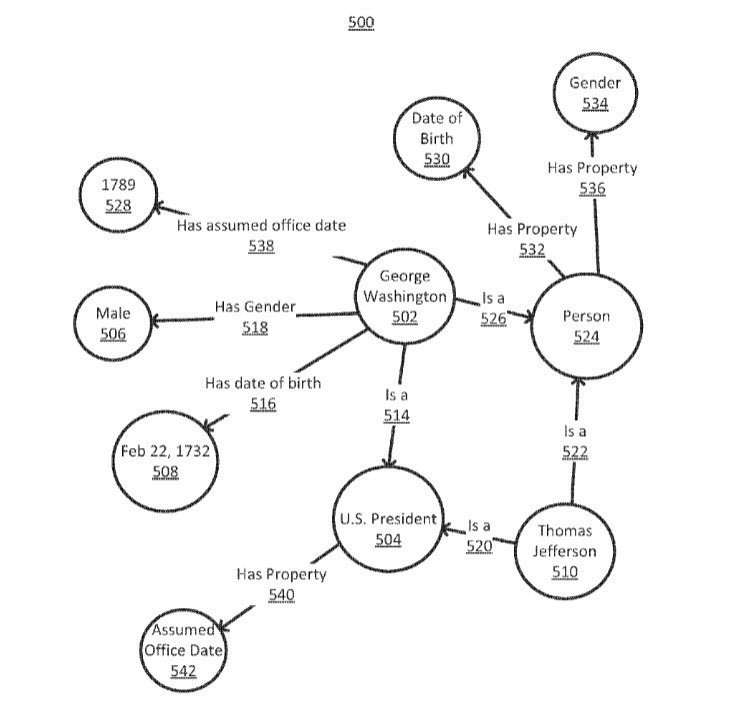 A Google patent application explores how Google may use entity references to answer factual questions from unstructured Web pages and results rather than from more structured sources such as Freebase or Wikipedia. The processes described in the patent are pretty interesting, and they might be more familiar to an SEO-trained audience than a Semantic Web one, like a result that ranks well because of a “query deserves freshness” approach.

They also avoid a problem for the search engines that I’ve been thinking about for a while.

“What happens when the world changes in some dramatic fashion, such as a country ceasing to exist, or a well-known figure passing away?”

How is a Knowledge graph updated in such instances? Is it something that might be done by hand? A way of updating such information quickly with less possibility of human error than a manual update would be good to hear about.

Sometimes a lot of things change in the world quickly, all at the same time.

If knowledge graph updates are needed to answer some fact-based questions, there’s the potential for those answers to be incorrect until an editor makes an update, when a change takes place. How do search engines such as Google and Bing respond to such changes?

How does Google’s Knowledge Graph get updated or does it wait until Freebase and other sources are edited to reflect such changes? And what of Bing’s Satori? I’m not sure of either, and I don’t know if investigating will reveal much.

I came across a Google patent application that was published roughly at the same time as the conference when Nicholas was giving that answer, and it pointed to a method where such questions might be answered with search results that could make it more likely that a timely answer could be given. A question such as, “Who is the monarch of Spain?” 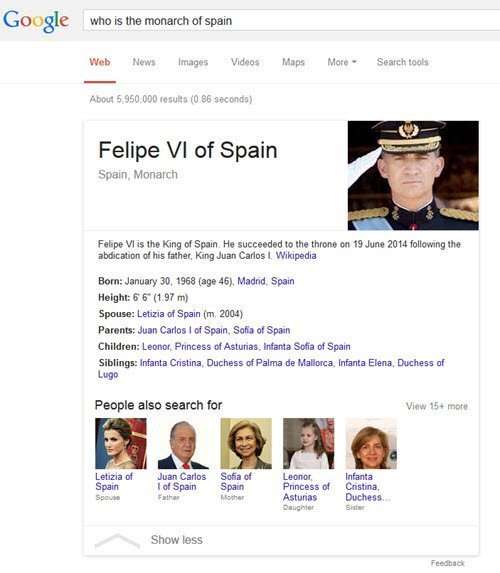 Not all questions are answered so well. I followed that up with a question that might seem obvious on its face, but which might provide a more specific or well-defined answer, and while the result was pretty timely, it wasn’t that helpful, asking, “Where does he live?” 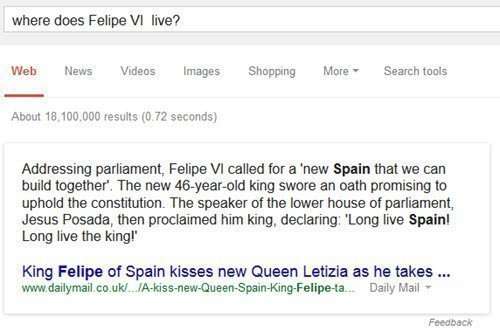 Regardless of Google’s lack of information about this recently (July) crowned King of Spain, it did know who he was, and not much may have been written about him on the web.

The patent tells us that there are some advantages to using the entity references processes described in the patent filing:

Yahoo doesn’t seem to have updated information about the new king, or at least it doesn’t return him as an answer at all. Then again, while Google has more timely news, they still seem to have some issues. It’s exciting watching things like these evolve.

So let’s look at this new Google patent application, and see how these “advantages” might play a roll in what we see.

The patent application was filed in March and not published by the patent office until September. Here are more details:

Methods, systems, and computer-readable media are provided for collective reconciliation. In some implementations, a query is received, wherein the query is associated at least in part with a type of entity.

One or more search results are generated based at least in part on the query.

An answer to the query is provided based at least in part on the entity result.

This image from the patent filing hints at some of the things that appear in the description: 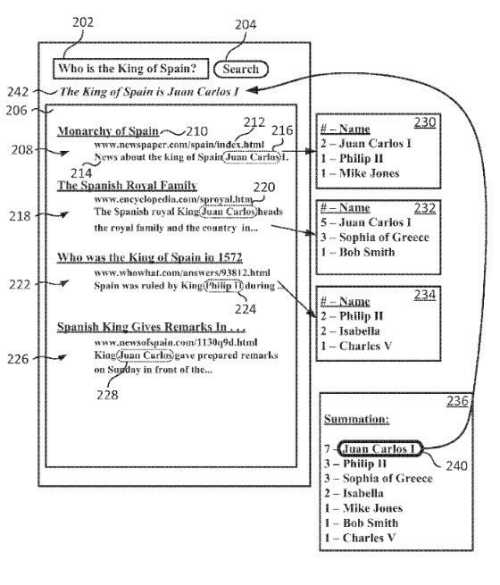 It looks like the patent missed the latest regime change in Spain, still listing Juan Carlos. This is one of the problems that the patent is aimed at solving.

Asking “who” in a query makes the query a “who query,” but the patent tells us of other query forms or types as well, such as “where queries” or “time queries” (which I like calling “when” queries.) 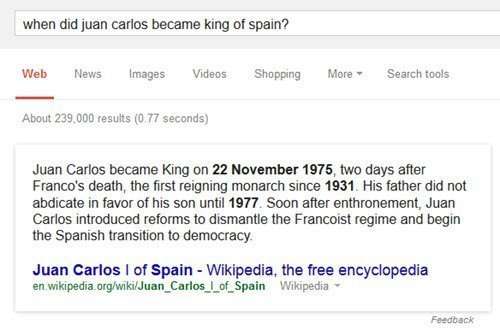 One important element of this patent is that it looks for mentions of entities in snippets and search results (entity references) to answer questions, and it does a nice job of describing what an entity is, so I’m going to quote the patent on that one to give you a taste for the patent itself (if you like it, you can click through and get this information even more directly)

As used herein, an entity is a thing or concept that is singular, unique, well-defined, and distinguishable.

For example, an entity may be a person, place, item, idea, abstract concept, concrete element, other suitable things, or any combination thereof. Generally, entities include things or concepts represented linguistically by nouns. For example, the color “Blue,” the city “San Francisco,” and the imaginary animal “Unicorn” may each be entities. An entity generally refers to the concept of the entity. In some implementations, an entity reference is a reference, for example, a text string, which refers to the entity. For example, the entity reference “New York City” is a reference to the physical city.

In some implementations, an entity is associated with a type of entity.

As used herein, a type is a categorization or defining characteristic associated with one or more entities. For example, types may include persons, locations, movies, musicians, animals, and so on. For example, “who” questions may have answers to the person type. It will be understood that while the system described below is generally shown about natural language “who” questions, Any suitable type of question may be answered.

A System for question answering, based upon entity references

A query may be a natural language search query (written or spoken), or received from user input, from another application, or generated by the search system based on previously received input or data.

As part of the process, search results may be returned based on the query that may come from an index of webpages and other content, on the web. This system next looks for from entity references such as references from the top ten search results.

Ranking and/or selecting may be based upon search-based criteria such as:

Sometimes information retrieved from entity references associated with a particular webpage may be in a list of persons appearing on that webpage. That list by itself might be a good answer if the question appears to be asking for a list, but the top listed result may be chosen as an answer like in the pictured example above.

Sometimes the top ten or top 20 results might be looked at, and an entity chosen from those. The chosen answer would have to fit the question type correctly, such as being a correct type of entity to fit a “who” query.

If multiple entities turn up as candidate answers, they might be put into a list, and ranking signals associated with them might be used to choose what may be the best answer. The highest-ranked entity could be chosen as the answer.

The most commonly occurring entity reference could be chosen as an answer, but other ranking signals might fit better. These are two types of signals that might be used:

Frequency of occurrence relates to the number of times an entity reference occurs within a particular document, collection of documents, or other content.

Topicality scores include a relationship between the entity reference and the content in which it appears.

The patent tells us that one quality score that could be used might be the number of links pointed to a page about a certain entity. While that is fairly simple, it’s a little different than the number of times a “fact” object appears in a data “object” such as a knowledge base that might act as an answer to a query.

It is as if Google is using the entire web as a data object where it can find answers to questions.

The patent provides an additional number of details, and I didn’t provide all of them here, though I’m going to include some others right now.

When ranking an entity reference mentioned in a search result based upon “Freshness,”, these things might be looked at:

The patent gets a little more obtuse when it tells us that it might rank entities in the top ten search results based upon number of mentions of them while looking at the following things:

How those all might fit is isn’t necessarily made clear in the patent, but what is clear from it is that sometimes answers aren’t readily available from a source such as Freebase, and when those times come about, sometimes Google may use the Web as a knowledge base, and look for entities in search results to find those answers.