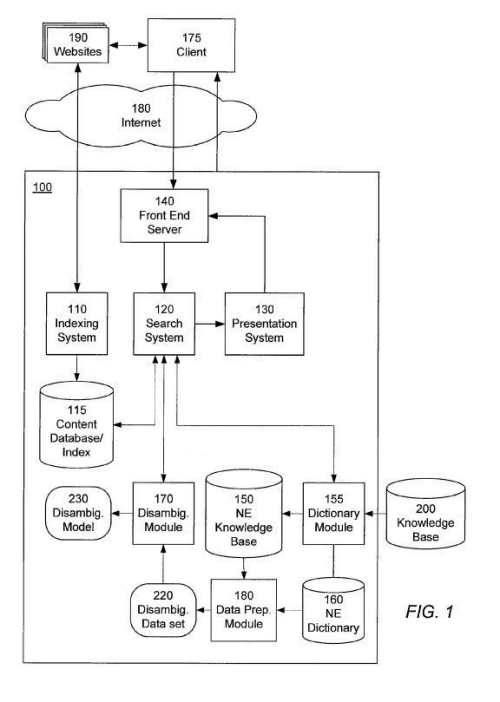 It contains a pretty thoughtful approach to named entity disambiguation.

The patent on named entity disambiguation was filed in 2006, and the inventors also authored an article in 2006 about named entities that show where their minds were at during the time:

The paper echoes the named entity disambiguation patent in many places, and it appears that the two documents were worked upon at the same time.

Named Entities are Common in Searches

The patent begins by telling us that searches for named entities are prevalent among the most popular Web sites. They include searches for persons, places, businesses, and other organizations for different types of products, such as books and movies. A named entity is a thing that has a proper noun or proper name associated with it. Some Microsoft research gave us impressive numbers about entities in queries:

According to an internal study of Microsoft, at least 20-30% of queries submitted to Bing search are named entities, and it is reported 71% of queries contain name entities.

When someone searches for a named entity, the search results returned in response usually contain relevant information about any entities with the same name, or even a portion of that name, as the query. A focus of this patent is upon telling such searches apart, and it provides some examples of these searches for similarly named entities:

The patent tells us that the order of search results for named entities has been typically presented based upon the frequency of the query terms, their PageRank, or other factors, regardless of which specific named entity is being referred to by a shared name. This is one of the problems that the patent attempts to solve.

How does the patent attempt to address named entities that may share the same name and enable us to distinguish between them?

A Knowledge Base of Named Entities

Part of the solution involves using a knowledge base that contains articles about named entities to use to disambiguate entities. As we learn from the paper, the knowledge base being referred to is Wikipedia.

This knowledge base is built from a database of documents that are about named entities; entities that have proper names, such as “John Williams” (a person), “Long Beach” (a place), and “Python” (a movie, a programming language, and a deadly snake).

How Wikipedia does Named Entity Disambiguation

Wikipedia has features that help do name entity disambiguation when entities would otherwise be ambiguous:

In short, relationship information about a specific sense of a name for a named entity depends upon its context – how it is linked to and which article it might be linked to as well. The relationship between the name of an entity and the particular named entity may be determined based upon a scoring model.

Articles found in the knowledge base (and named entities) can be associated with specific categories. The strength of the relationship between a named entity and a category is learned and made part of the scoring model. That can also be used to disambiguate named entities in queries. Note that articles in Wikipedia are often assigned a category, too.

Various aspects of the knowledge base, including article titles, redirect pages, disambiguation pages, hyperlinks, and categories, are used to develop the scoring model.

A Dictionary of Named Entities

On a search for “John Williams,” the results shown may be for:

Keep in mind that this patent was originally filed before Google had created their Knowledge Graph. Therefore, when they refer to a knowledge base in this patent, they are most likely referring to Wikipedia, which they call an “exemplary knowledge base.”

The named entity disambiguation patent tells us about features of Wikipedia that help it distinguish between entities. That section of the patent is worth reading in its covers, articles about specific entities, what it calls redirect articles and disambiguation articles, and how categories are created for each entry in Wikipedia. The links pointed to and from articles about different named entities also help provide details about those that can distinguish one from another.

Information found in queries that include named entities may have some correlations between them and the Wikipedia articles that can help identify entity disambiguation.