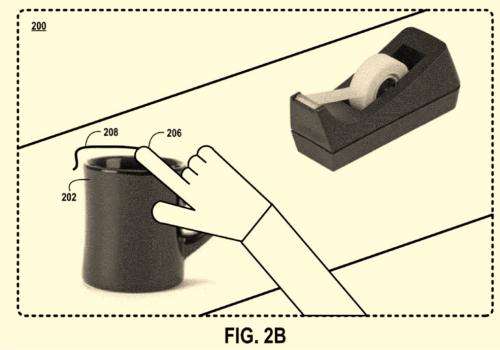 These details come from an anonymous source who gave us more details on the project. The report states a new feature will be integrated, allowing users to outline specific image areas to target their searches.

Added 1/13/2020 – Google Goggles no longer exists. Still, many of the features that it had, and might have had added to it, such as the ability to focus upon objects within a photo, are features that are included in Google Lens. I am updating this post to point to that app instead of Google Goggles.

In Google Goggles, one can only search the whole image, which has proven to bring plenty of discrepancies. In addition, images often display plenty of distractions, background items, and other objects that may throw off a search result. According to the sketch provided, the system will also recommend retailers for purchasing products and other details.

Furthermore, it is said this technology has also been tested in “wearable computing devices.” This could suggest this technology may come to products like Google Glass and possibly even VR (or AR) headsets.

Today, we’re to understand – from an anonymous source, as it were – that Google may soon be releasing a new camera feature they’ve had in testing for some time. This feature would allow the user to use their standard Google Camera app to search for information based on what they’re able to see – but more than that.

Details given to Android Authority through an anonymous source state that the integration would include a new feature “allowing users to outline specific areas of the image” to target their searches directly. This would improve the current iteration of Google Goggles, which only allows you to search whole images.

I’ve noticed some stories about new visual search features available through Google leaked out to the media from an anonymous source. And I also noticed a patent application filed by Google, which was just published. It contains at least one image that is the same as one supplied to Android Authority, which makes me wonder if the anonymous source contacted them was from Google.

The patent filing does describe how a person might take an image from a photograph and outline part of that image with a stylus or a finger, and have search features available to them like those available from within Google Goggles.

Back in 2011, I wrote the post The Future of Google’s Visual Phone Search?, which supposedly would offer the ability to provide mixtures of searches simultaneously on an image, of the types offered through the Google Goggles App. That type of rich visual search never materialized from Google. The types of search under that richer visual search patent filing from 2011, included:

A wearable device that could be Google Glass might use a camera to watch an object from a photo be outlined, and that outlining could trigger a visual search. Based on the image outlined, the search could be one of these specialized searches that we see from Google Goggles. So you would ideally take a photograph and then outline an object within the image, and that outlining would be captured by your wearable device.

The patent filing that provides more details on this rumored visual search is:

Thad Starner is, among other things, a technical lead manager for Google Glass and the director for the Contextual Computing Group at Georgia Tech Ifran Essa teaches at the Georgia Tech Institute for Robotics and Intelligent Machines and does Research on Video Analysis and Enhancement for Google.

The patent tells us that the advantage of the approach in this patent is that outlining the object can speed up the search, and “computing power may not be expended to perform searches in which the user is not interested.”

That makes it sound like it is a reaction to the multiple searches for the patent I wrote about in 2011.

This appears to require that someone use a wearable such as Glass (It hints that other wearables could be used) along with a camera from a smartphone to perform visual searches. It’s the first patent that I’ve seen from Google that requires a combined use such as that – it’s possible that there have been others, but I didn’t see them. Given how popular phones with cameras are these days, I don’t think it’s a problem that combines multiple devices like this. It seems to make Google Glass have more uses. For example, I suspect that you can outlines objects on images that you didn’t photograph as well.