I’ve seen posts from SEO by the Sea show up in search results with an “In the News” heading above them, even though my site hasn’t officially been accepted in Google News. Some blog posts that have been given that “In the News” treatment have been criticized lately. See: Google does a better job with fake news than Facebook, but there’s a big loophole it hasn’t fixed. It seems that this criticism is going to have an impact, with the “In the News” label taken away from Google Search Results:

Are there any other solutions? I do like it when something I write is treated as newsworthy and is presented to a larger audience in a way that helps those posts stand out, but sometimes satire blog posts end up being treated that way as well. This article points out some other possible solutions:

Artificial intelligence isn’t going to save us from fake news – How might a search engine weed out fake news? It’s a question that is on many people’s minds, and this article has some answers. 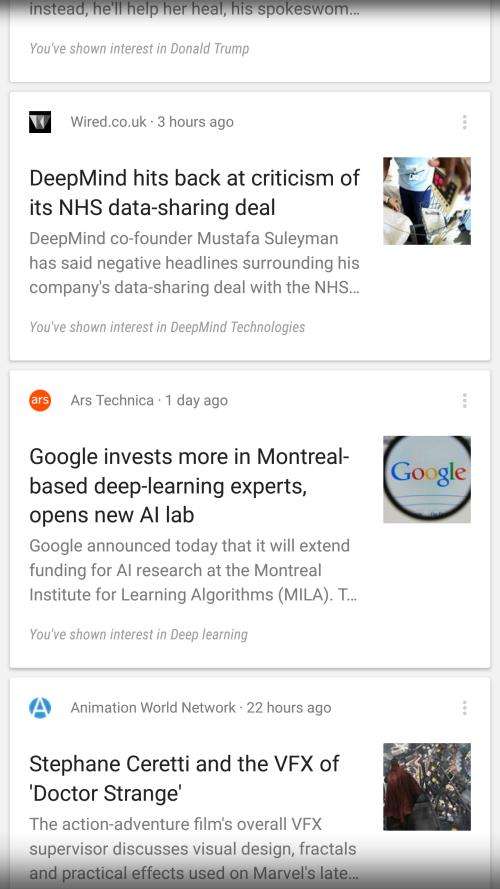 I found a patent from Google earlier this month that seems like it might be related to such news recommendations. It doesn’t mention Google Now or “In the News,” but I found it interesting how it performs a topic analysis. It tells us about that with these lines:

An indexer discovers a news content item. The topic analyzer identifies one or more topics to associate with the content item. In one embodiment, topics are identified using the Google Knowledge Graph database of topics (not shown). This database includes a huge collection of known topics, as well as connections between topics based on their relevance to one another.

The Google news recommendation patent targets topics surfaced that a person might be interested in, and those topics can include geographically relevant news. It can also apply a decay function to older topics and interests that a person may have lost interest in. The patent is:

Described embodiments enable the presentation to a user of news articles or other content that is of likely interest to a user and that is geographically relevant to the user’s location or region of interest. A news delivery system includes an ingest module that assigns topics and locations to available content, a profile engine that determines profile topics and geographic locations that a particular user finds relevant, and a news delivery module that selects content for the user based on the operation of the ingest module and the profile engine. The profile engine performs decay processing to remove stale topics and locations from a user’s profile in one embodiment. In related aspects, the profile engine maintains multiple profiles for the user.

The Google News Recommendations patent provides some examples of how topics of news stories might be identified, like one that notes that the word “United” appears frequently, and that might be paired with travel and about “United Airlines” or shown in association with moving and about “United Van Lines.”

12 thoughts on “Google News Recommendations and the Google Knowledge Base”