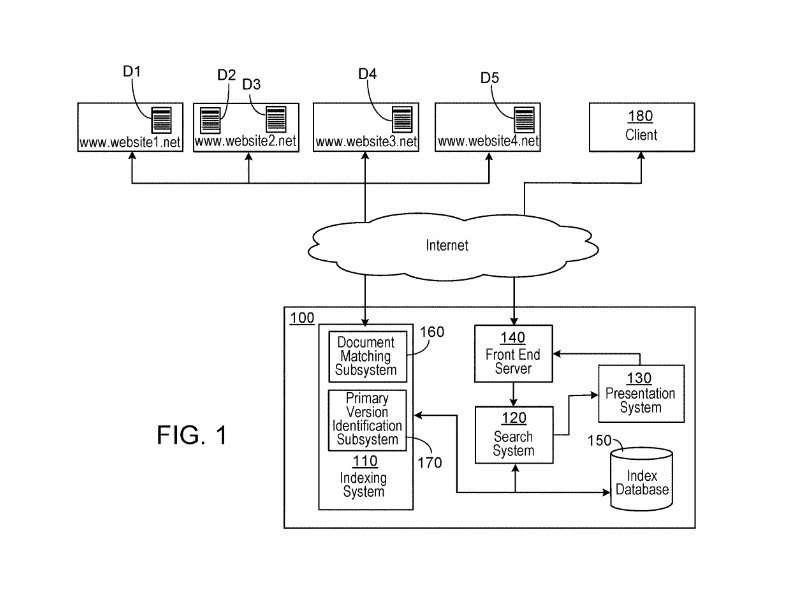 We know that Google doesn’t penalize duplicate content on the Web, but it may try to identify which version prefers to other versions of the same page.

I came across this statement from Dejan SEO on the Web about duplicate content earlier this week, and wondered about it, and decided to investigate more:

If there are multiple instances of the same document on the web, the highest authority URL becomes the canonical version. The rest are considered duplicates.

The above quote is from the post at Link inversion, the least known major ranking factor. (it is not something I am saying with my post. I wanted to see if there might be something similar in a patent. I found something closer, but it doesn’t say the same thing that Dejan predicts.
.

Since the claims of a patent are what patent examiners at the USPTO look at when they are prosecuting a patent and deciding whether or not it should be granted. I thought it would be worth looking at the claims contained within the patent to see if they helped encapsulate what it covered. The first one captures some aspects of it that are worth thinking about while talking about different document versions of particular duplicate pages and how the metadata associated with a document might be looked at to determine which is the primary version of a document:

Another patent shares an inventor with this one that refers to one of the duplicate content URLs being chosen as a representative page, though it doesn’t use the phrase “canonical.” From that patent:

This other patent is:

Those are the three reasons this duplicate content patent says it is ideal for identifying a primary version from different versions of a document that appears on the Web. The search engine also wants to furnish “the most appropriate and reliable search result.”

How does it work?

The patent tells us that one method of identifying a primary version is as follows.

The different versions of a document are identified from several different sources, such as online databases, websites, and library data systems.

For each document version, a priority of authority is selected based on:

(1) The metadata information associated with the document version, such as

(2) As a second step, the document versions are then determined for length qualification using a length measure. The version with a high priority of authority and a qualified length is deemed the primary version of the document.

If none of the document versions has a high priority and a qualified length, then the primary version is selected based on the totality of information associated with each document version.

The patent tells us that scholarly works tend to work under the process in this patent:

Because works of scholarly literature are subject to rigorous format requirements, documents such as journal articles, conference articles, academic papers, and citation records of journal articles, conference articles, and academic papers have metadata information describing the content and source of the document. As a result, works of scholarly literature are good candidates for the identification subsystem.

Meta data that might be looked at during this process could include such things as:

The duplicate content patent goes into more depth about the methodology behind determining the primary version of a document:

The patent includes a table illustrating the source-priority list.

I was in a Google Hangout on air within the last couple of years where I and several other SEOs (Ammon Johns, Eric Enge, Jennifer Slegg, and I) asked some questions to John Mueller and Andrey Lipattse, and we asked some questions about duplicate content. It seems to be something that still raises questions among SEOs.

Is this a little-known ranking factor? The Google patent on identifying a primary version of duplicate content does seem to find some importance in identifying what it believes to be the most important version among many duplicate documents. I’m not sure if there is anything here that most site owners can use to help them have their pages rank higher in search results, but it’s good seeing that Google may have explored this topic in more depth.

Another page I wrote about duplicate content is this one: How Google Might Filter Out Duplicate Pages from Bounce Pad Sites

60 thoughts on “How Google Identifies Primary Versions of Duplicate Content”