This patent is interesting because it takes an older type of search – where a query returns pages in response to the keywords typed into a search box, with a newer type of search, where an entity is in a query. Then, knowledge information about that entity can create possible augmentation queries combined with the original query results.

The process behind this patent works in this way:

A summary of that process is:

That ranking can be on the frequency of occurrence.
The ranking can also be on the location of each of the one or more attributes about at least one entity in the set of results. 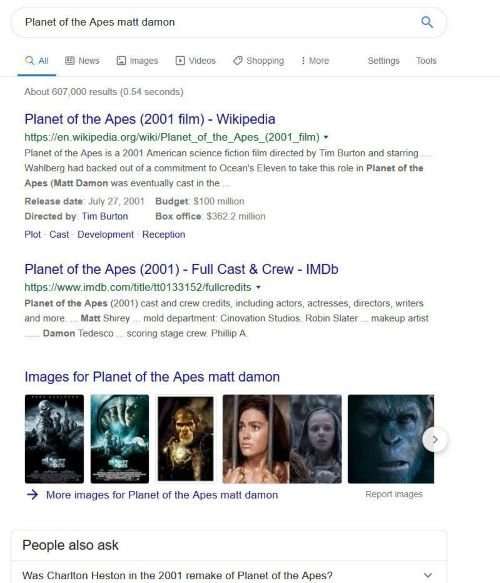 This process can identify two different entities in a query. For instance, there were two versions of the Movie, the Planet of the Apes. One was from 1968, and the other was from 2001. They had different actors in them, and the second was a reboot of the first.

This process is broader than queries involving people. We have a list in the patent that it includes, and it covers, “a person, place, item, idea, topic, abstract concept, concrete element, another suitable thing, or any combination thereof.”

And when an entity reference appears in a query, it may cover many entities, for example, a query that refers to John Adams could be referring to:

Besides having an entity in an entity reference in a query, we may see a mention of an attribute for that entity, which is “any feature or characteristic associated with an entity that the system may identify based on the set of results.” For the John Adams entity reference, we may also see attributes included in search results, such as [second president], [Abigail Adams], and [Alien and Sedition Acts]. 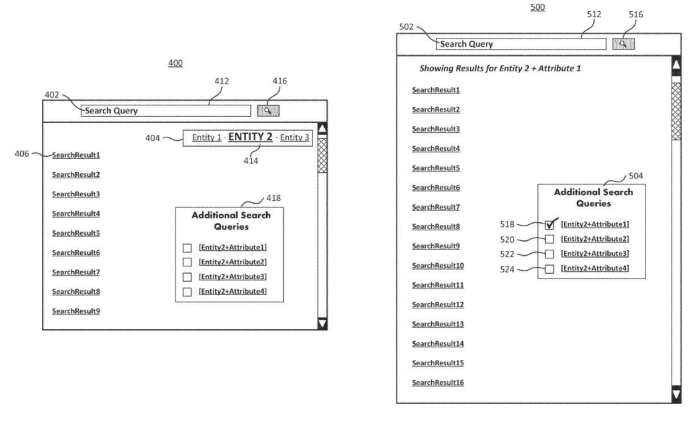 It sounds like an entity selection box could allow a searcher to identify which entity they might like to see results about, so when there is an entity in a query such as John Adams, and there are at least three different John Adams in augmented search results, there may be clickable hyperlinks for entities for a searcher to select or deselect to choose which entity they might want to see more about.

When an original query includes an entity reference in it, Google may allow searchers to identify which entity they are interested in. This brings the knowledge graph to search, using it to augment queries in such a manner. A flowchart from the patent illustrates this process in a way that was worth including in this post:

The patent provides a detailed example of how a search that includes entity information about a royal wedding in England using this augmented search query approach. That may not be a query that I might perform, but I could imagine some that I would like to try out. For example, I could envision some queries involving sports and movies, and business. Unfortunately, if you own a business, and it is not in Google’s knowledge graph, you may miss out on interest results from augmented search queries.