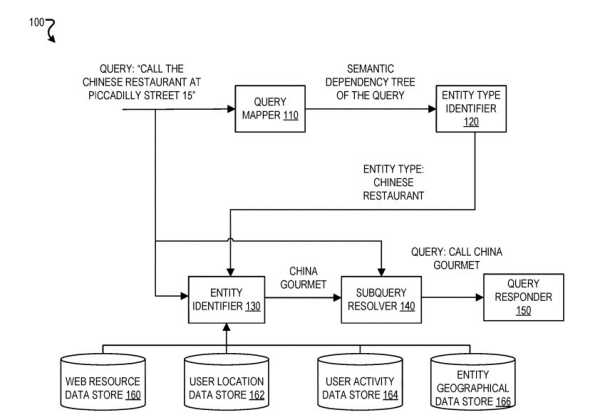 Queries for some searches may be entity-seeking queries.

Someone may ask, “What is the hotel that looks like a sail.” That query may look for an entity such as the building, the Burj Al Arab Jumeirah.

That entity may look at Semantic Dependency Trees. Those would answer a question in the query (example below).

Other queries are not entity-seeking queries and do not look for answers about specific entities. An example is “What is the weather today?” An answer to a query like that could be, “The weather will be between 60-70 degrees Fahrenheit and sunny today.”

Actions May Go with Queries that Seek Entities

Google got granted a patent on answering entity seeking queries.

The process in the patent may perform particular actions for queries seeking one or more entities.

Those actions may include:

For example, the patent may decide a query “What is the hotel that looks like a sail” is looking for a single entity that is a hotel.

In another example, a query “What restaurants nearby serve omelets” may look for restaurants. It many try to find many entities.

More Dialog about a Query to Concatenate an Entity Seeking Query

Yet another addition or alternative action may include initiating a dialog with the user for more details about the sought entities.

For example, the system may determine that a query is seeking a restaurant. There may be two entities that are very relevant to the terms in the query. In response, ask the searcher, “Can you give me more details” and concatenate additional input from the user to the original query and re-execute the concatenated query.

Another alternative action may include identifying subqueries of a query that are entity-seeking. The search engine would use the above actions to answer the subquery. It would then replace the subqueries with their answers in the original query to get a partially resolved query resolved.

Another alternative action may include identifying that a user is seeking entities and adapting how the system resolve queries accordingly.

An Advantage From Following this Process

An advantage may be more quickly resolving queries in a manner that satisfies a searcher.

For example, the system may be able to immediately provide an actual answer of “The Burj Al Arab Jumeirah” for the query “What hotel looks like a sail.” Another system may instead respond to “no results found” or provide a response that is a search result listing for the query. 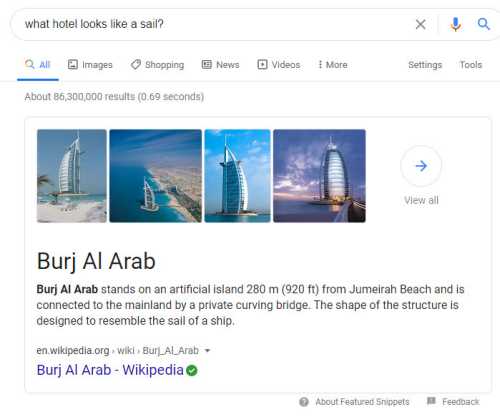 Another advantage may be that the process may more efficiently identify an entity sought by a query. For example, it may determine an entity seeking query is looking for an entity of the type “hotel” and, in response, limit a search to only entities that are hotels instead of searching across many entities, including entities that are not hotels. 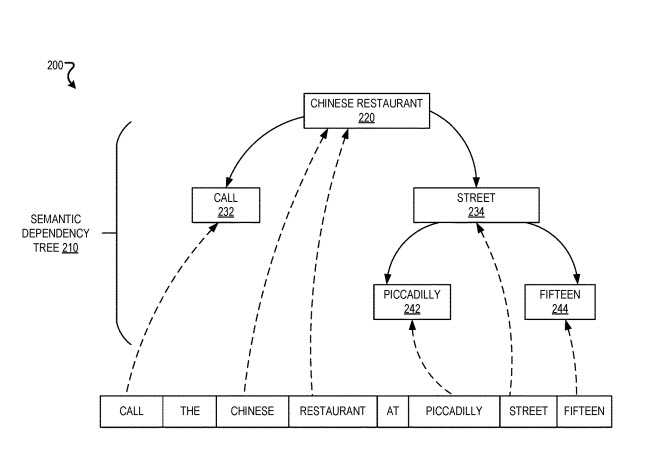 This is an interesting approach to an entity seeking queries. Determining an entity type that may correspond to an entity sought by a query based on a term represented by a root of a dependency tree includes:

Determining the term represented by the root of the dependency tree represents a type of entity.

Determining an entity type that corresponds to an entity sought by the query based on a term represented by a root of the dependency tree includes:

In some implementations, identifying a particular entity based on both the entity type and relevance of the entity to the terms in the query includes:

This patent on Entity Seeking Queries is at:

In some implementations, a query that includes a sequence of terms is obtained, the query is mapped, based on the sequence of the terms, to a dependency tree that represents dependencies among the terms in the query, an entity type that corresponds to an entity sought by the query is determined based on a term represented by a root of the dependency tree, a particular entity is identified based on both the entity type and relevance of the entity to the terms in the query, and a response to the query is provided based on the particular entity that is identified.

Mapping a Query to a Semantic Dependency Tree

This is how a semantic dependency tree gets created:

An entity type identifier may determine an entity type that corresponds to an entity sought by the query based on a term represented by a root of the semantic dependency tree.

Entities from a Location History of a Searcher

Entities from a Past Interaction History of a Searcher