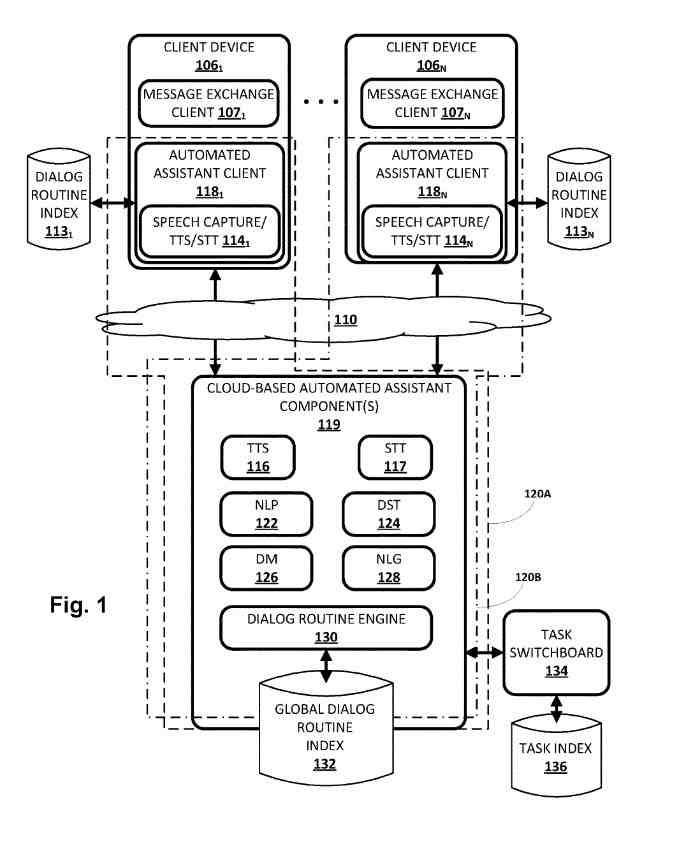 Google was granted a patent this week specifically about user-programmable automated assistants. It’s one of a number of patents about how Google is building that functionality into devices it is creating. There are a few more that have recently been granted which I haven’t written about yet.

I have written a few posts about some others, and it makes sense to share a number of those as I start this post, so that you can take a look at those if you would like.

Most of these patents from “human-to-computer dialogs” when talking about natural language processing and programs are referred to as “automated assistants.”

They also call them a number of other names such as:

Automated assistants perform a variety of tasks, while they respond to a number of predetermined canonical commands (which the tasks are mapped to) These tasks include:

This reminds me of what I wrote about the first Siri patent and how it was going to be an intelligent assistant, in the post from January 19, 2018 – Apple’s Siri Patent Application. It could be really helpful to have an assistant that could help do all of those things.

Like most patents, this one starts by identifying a problem that it tries to solve. It sets out this problem in this way:

It adds some additional points:

Okay. it sounds like the patent inventors have been watching buddy movies, with robot sidekicks, but this could work.

This patent tells us about techniques for allowing users to employ voice-based human-to-computer dialog to program automated assistants with customized routines, or “dialog routines,” that can later be invoked to accomplish a task.

If automated assistants are unable to interpret the command, they may solicit clarification from the user about the command.

Automated assistants may prompt users to identify slots required to be filled with values in order to fulfill the task.

The user may identify the slots proactively, without prompting from the automated assistant.

The user may provide, at the request of the automated assistant or proactively, an enumerated list of possible values to fill the slots.

The automated assistant may then store a dialog routine that includes a mapping between the command and the task, and which accepts, as input, values to fill the slots.

The user may later invoke the dialog routine using free-form natural language input that includes the command or some syntactic/semantic variation thereof.

Transmission may cause the remote computing system to output natural language output or other data indicative of the values/slots/command/task, to another person.

This natural language output may be provided to the other person in various ways, which may not require the other person to install or configure its own third-party software agent to handle the request such as via an email, text message, or automated phone call. That other person may then fulfill the task.

Examples of User-Programmable Automated Assistant Tasks Envisioned by the Patent 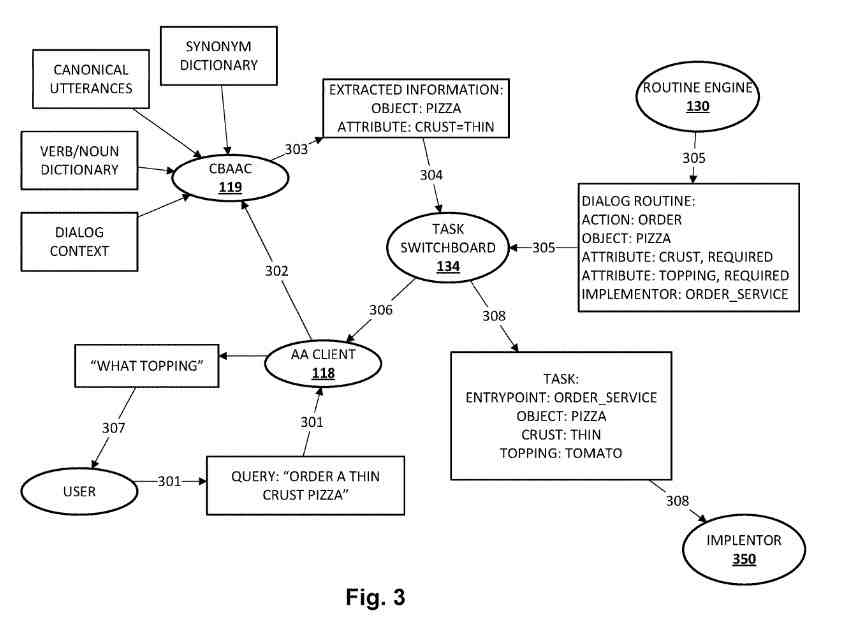 The command in this scenario is “I want a pizza,” and the task is ordering a pizza. The user-defined slots required include a type of crust and a list of toppings.

The task of ordering the pizza may be accomplished by providing natural language output, e.g., via an email, text message, automated phone call, etc., to a pizza store (which the user may specify or which may be selected automatically, based on distance, ratings, price, known user preferences.

An employee of the pizza store may receive, via the output of computers, such as a computer terminal in the store, the employee’s phone, a speaker in the store, the natural language output, which may say something like “(I) would like to order a (crust_style) pizza with (topping 1, topping 2, . . . ).”

The pizza shop employee may confirm the user’s request, such as by pressing “1” or by saying “OK,” “I accept,” etc.

Once that confirmation is received, the requesting user’s automated assistant may provide confirmatory output, such as “your pizza is on the way.”

The natural language output provided at the pizza store may also convey other information, such as payment information, the user’s address.

This other information may be taken from the requesting user while creating the dialog routine or determined automatically, such as being based on the user’s profile.

The patent tells us that at some point a software agent may interact with an automated assistant to take and receive orders. Is this the future of services such as Doordash?

Advantages of this Automated Assistant Approach

Many patents include a section where they identify the advantages of using the process described in the patent to solve the problems that they solve, and this one is no different.

This User-Programmable Automated Assistant Patent is at:

Techniques described herein relate to allowing users to employ voice-based human-to-computer dialog to program automated assistants with customized routines, or “dialog routines,” that can later be invoked to accomplish tasks.

In various implementations, a first free form natural language input–that identifies a command to be mapped to a task and slots required to be filled with values to fulfill the task–may be received from a user.

A dialog routine may be stored that includes a mapping between the command and the task, and which accepts, as input, values to fill the slots.

(i) invoke the dialog routine based on the mapping, and

(ii) to identify values to fill the slots. Data indicative of at least the values may be transmitted to a remote computer for the fulfillment of the task.

I did find myself curious about how and if Google was experimenting with this process, so I searched and found a Verge article: Google Assistant can now help order takeout from restaurants online. As the article tells us:

To use the new feature, you have to search for whatever restaurant you’d like to order from in the Google app, then select the “Order Online” button on the restaurant’s information card. After making your food selections, you can tag in Google Assistant to complete the order using your stored contact and payment information from Google Pay and Chrome Autofill. Assistant then confirms you’re ready to pay, and the order is placed.

When I think of Google offering the use of Goog411 as a free phone-based business directory for years so that they could collect voice information in exchange, this use of the Automated Assistant to place part or all of a food order fits into what Google has done for free for years. Google is working on issues surrounding a user-programmable automated assistant filling orders for people.

This is outside of search directly, but it is tied to doing online searches for food, and having an automated assistant complete an order.

There are many other recent patents about Automated Assistants, and I will likely be writing about them too. It is interesting seeing how Google is developing the use of automated assistants even now. I suspect that there will be a lot more to come.

7 thoughts on “A User Programmable Automated Assistant from Google”