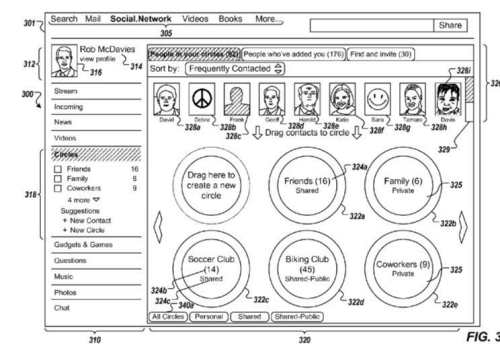 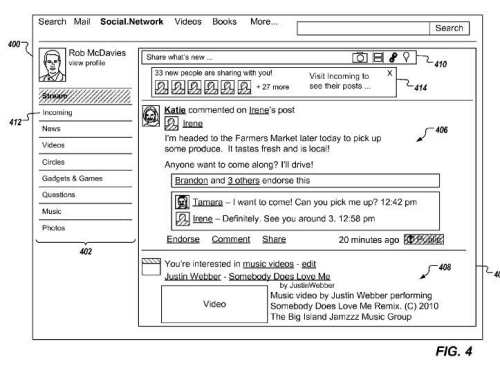 The patent also describes showing content related to searches on the social network, and ranking content in response to queries in those searches, based upon these social interaction scores.

These scores determine which items might be boosted and displayed within a certain “threshold time period” of digital content having been added to the social network.The patent talks a lot about social circles, When you add someone as a contact at Google+, you decide what circle they are added to. When you create content on Google+ and share content, you decide whom you are sharing that with from the circles that you’ve created. That can influence what people see when they look at content on Google+. To a degree, this patent is a little like Facebook’s Edgerank, the algorithm that determines what stories you see in Facebook’s News Feed.

Some items that stand out in the patent:

Unread items can be boosted to be displayed more prominently in streams pages or search results to a user.

The patent has a large focus upon circles, and it discusses them and their importance a great deal.

Some people might set up in circles that define them as a grouping of a set of contacts, such as a “co-workers” circle. This would make it easier to contact co-workers, and not send content to people whom aren’t co-workers.

Social circles are personal circles, which are created by and known only to the user who creates them.

Circles can be shared public circles or shared private circles. A public circle sounds like what a community is now at Google+ – People know what the circle is for, and can request to join.

Some default social circles may be provided, such as “family,” “friends,” and “co-workers.”

Relevance based upon Relationships

A close-ties score can reflect how relevant the digital item might be to a potential viewer based upon the relationships between that user, and the person who authored the content, and possibly one or more other users who may be somehow associated with the item.

The score for a piece of digital content might be determined in part based upon whether or not there may have been a “mention” (+FirstName Lastname) of the viewer.

Bonuses and or Penalties may be used in this scoring based on social interactions. A bonus = the digital content may be important to the user. “Bonus values can be added to the close-ties score if a certain number of images and/or videos are included in the item and/or if the author user rarely distributes items through the social networking service.” A Penalty = The digital content may not be important to the user. So, if the item was distributed widely within a certain time period, it wasn’t aimed at that viewer.

The patent also talks about an interaction score that can determine how frequently views of content are shown and refreshed for different viewers, and whether certain content might be boosted and shown more frequently, or less frequently, based upon things such as whether or not it’s been read before by the viewer.

I sometimes receive notifications at Google+ that may mention my name or are from a community that I joined that I would like to save and return to later. Sometimes there isn’t enough time to write a lengthy response to something you seen that it deserves. I sometimes wish those had been sent to me through email, which would give me more time to respond. Or I wish Google allowed you to save a certain number of notifications that you could respond to, without having to click on the “previously read” links at the bottom of notifications.

I have noticed that if I write longer introductions and comments on things I post or share to Google+, that those tend to be better received, which makes sense. Share your opinion and insights and people seem to appreciate those.

10 thoughts on “Google+’s Edgerank; Content is shared based on Social Interactions”